Crab Poop: Everything You’ve Ever Wanted to Know

iStock.com/ANDREYGUDKOV
Share this post on:
More Great Content:
The 10 Largest Crabs in the World
Crayfish vs Lobster: 5 Key Differences Explained
Opilio Crab vs King Crab: What Are…
Discover the Largest Lobster Ever Caught!
Discover The World's Oldest Lobster (140 Years…
What Do Crayfish Eat?

Crabs are some of the most unique ocean creatures to exist, with over 6,700 recognized species worldwide. Although the ocean is the primary habitat for crabs, some species can also be found living along the shoreline. Some species also inhabit freshwater instead of the saltwater environment of the ocean.

Aside from their general appearance, another thing that varies among different crabs is their diet. Their diversified diet has raised several questions concerning their poop, what it looks like, whether or not it is harmful, and other random facts. Keep reading to find answers to all your questions about crab poop.

Crabs are decapod crustaceans, belonging to the suborder Brachyura. It is important to note that not all crab species fall under this suborder. For instance, the king crab, one of the most well-known species, is a member of the Lithodidae family. Examples of other crab species include hermit crabs, blue crabs, coconut crabs, and fiddler crabs.

One of the great things about crabs is that most species look nothing alike, each having its unique appearance. Although each crab is different, they all have a spherical or oval-shaped body that is smooth or covered in protrusions, protecting them from predators. Crabs also have ten legs, five on each side of the body.

Where Do Crabs Live?

The Pacific Ocean, Atlantic Ocean, Indian Ocean, and Antarctic Ocean are all recognized by the International Hydrographic Organization as the major oceans of the world. The most common habitat for crabs is the ocean, although some species also enjoy inhabiting freshwater. Aside from these species that enjoy living in bodies of water, some others rather spend their time on land. Species like the fiddler crab like to spend time in burrows in the sand or mud and can survive there even in the winter. Other species also like to inhabit the shells of oysters and mussels.

Regardless of the species of crab or their designated habitat, there is a general curiosity as to how crabs go about their “business.” Like all other living animals, crabs poop and pee. The appearance of a crab’s poop depends entirely on its species and what it eats. In other words, not all crab poop looks the same. Also, crabs tend to poop in their shell and use their back legs to push the poop out. Crabs have anuses, also known as telsons, through which they poop. For hermit crabs, their poop varies between brown and black and usually comes in a small sausage shape between 0.39 to 0.59 inches long.

On the other hand, fiddler crabs have very small poop shaped like tiny brown dots, just like their eyes. Like other crabs, they poop through their anus, which is located at the end of their tails. Because of how tiny their poop is, it is very easy to miss, especially when they are in the ocean or kept as pets in a tank. The reason for this is that the water easily breaks their poop into even tinier bits that are harder to spot.

Regardless of the species of crab in question, crab poop is usually very small, brown, and mostly odorless. However, the size of a crab’s poop is also dependent on the size of the crab in question and the amount of food it eats. It is also worth noting that crabs do not pee the same way they poop. These animals pee from antennal glands very close to their eyes.

One of the most shocking facts about crabs and food is that in the absence of proper food, most crabs can survive on the droppings of other animals. Aside from this unique survival trait, all crabs are omnivorous animals, feeding on plants and animals. Smaller crabs tend to live most of their lives as parasites, living off other animals like oysters, mussels, and sea cucumbers. These smaller crabs feed on the food meant for their hosts. On the other hand, bigger crabs often spend time in burrows, surviving on shrimp and other small fish that get too close. They also eat clams, seahorses, mussels, algae, and even smaller crabs.

Many of these bigger crabs spend most of their time in burrows because they serve as prey for otters, octopuses, and humans. Because of this, some crab species are listed as near threatened by the International Union for the Conservation of Nature (IUCN).

Because of how tiny crab poop is, it might not be easy to notice. In fact, you can go your whole life without ever noticing crab poop, no matter how much time you spend at the beach. If you have a crab as a pet, it would take a lot of attention on your part to notice your crab’s droppings too.

Currently, there are no known harmful effects of crab poop on humans and other animals. Because of how small they are and the fact that the ocean can easily break them down, it is easy for other aquatic animals to consume crab poop unknowingly. Also, it is easy for humans to consume crab poop unknowingly, especially if the crab’s shell is not cleaned properly before cooking. Even though no known danger comes with eating crab poop, it is still necessary to proceed cautiously and avoid all forms of consumption.

Spider Crab vs King Crab: What Are the Differences? 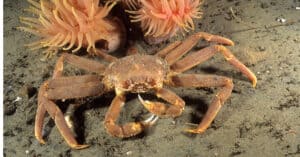