Can have a leg span of nearly 2 meters! Click through all of our King Crab images in the gallery. 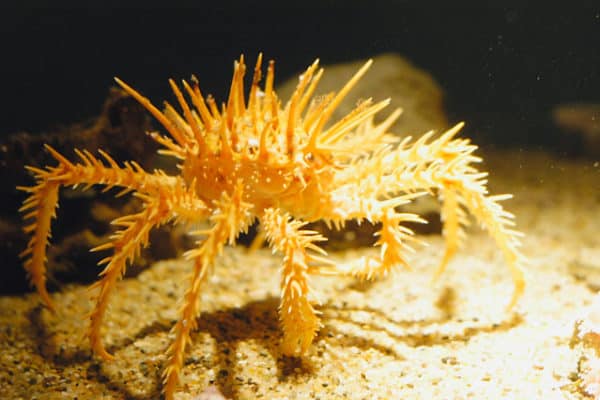 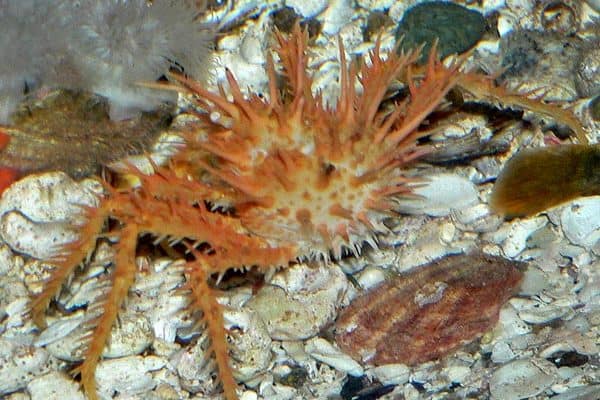 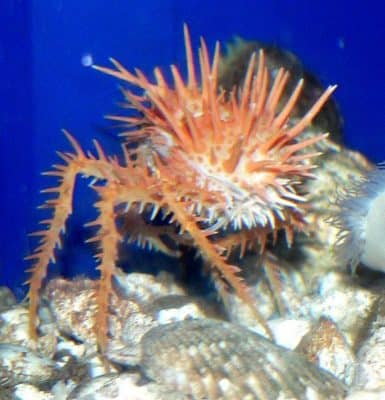 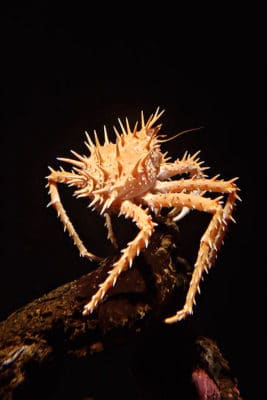 View all of the King Crab images!

The king crab is one of the most enormous crab species known to man. It can weigh more than 11 pounds, which is heavier than a house cat, and have a total leg span of over 5 feet, which means that it can be as long as a human is tall.

King crabs are also sometimes referred to as Alaskan king crabs, red king crabs or Japanese crabs. They can only grow larger through a process called molting in which they shed their old shells and grow newer, larger ones.

In general, king crabs can be found along the Alaskan coast, in the Bering Sea and in the shallow waters surrounding the coast of Japan. They are the most popular crab to eat, and their meat is considered a delicacy in most parts of the world.

The red king crab’s scientific name is Paralithodes camtschaticus. In addition to being called red king crab or Alaskan king crab, it may also be referred to as Kamchatka crab or Japanese crab.

“Paralithodes” comes from the Ancient Greek prefix “para,” which means “beside,” “near” or “closely resembling,” and the Greek word “lithodes,” which means “stone-like.” This means that king crabs are a part of a group of animals who all have rigid, hard, “stone-like” shells.

Despite its name, the red king crab is typically not red. Live ones tend to have a more orange or burgundy hue. Some can even be a brownish-blue color. The name actually comes from the fact that they turn bright red when cooked.

Like most crab species, king crabs are covered in a thick and heavy shell, which is usually called a carapace. In addition, their entire bodies are covered in large, sharp spines for additional protection.

Outside of mating season, king crabs are solitary creatures. However, they have been known to group together in the face of large predators. They will stack on top of each other in what is known as a “pod” in order to appear larger and more menacing. These pods can be dozens of feet high and contain stacks of hundreds of crabs.

The fifth set of legs is also different from the rest. These legs are smaller and specialized to aid the crabs in egg fertilization during mating and cleaning fertilized eggs after they have been laid.

Most species of king crabs prefer to live in relatively shallow and muddy coastal waters that are less than 200 feet deep. They can live in waters that are as deep as 650 feet, however, so they are versatile.

Adult king crabs generally prefer cold water that is between 2 to 4 degrees Celsius or 35 to 40 degrees Fahrenheit.

King crabs are carnivores, and they are known for eating smaller ocean creatures such as worms, snails, mussels, barnacles, sea urchins, clams and fish. They will even eat smaller crab species.

They are also considered opportunistic feeders, which means that they are not picky eaters. They will eat whichever invertebrates are easiest to find and crush with their pincers in the nearby surroundings.

The natural predators of king crabs include large fish like cod, halibut and other similar species as well as skates and sculpins. They are also in danger from octopuses and even other king crabs.

The largest king crabs have very few natural predators due to their sheer size and the fact that they are only vulnerable right after molting.

Human harvesting of king crabs is another threat to wild populations. However, a number of man-made fisheries have been established, and strict harvesting regulations are in place, so they are not considered to be endangered.

In the wild, king crabs can live up to 30 years. Most do not live this long, but it is normal for a king crab to live at least 20 years when there is minimal threat of human harvesting.

King crabs reach sexual maturity after about five years, and their reproduction cycle begins in the spring.

In mid-spring, usually around May, mature female king crabs will migrate to warmer, shallower waters to ensure that they can safely spawn their eggs. They can spawn anywhere from 50,000 to 500,000 eggs at once.

Male king crabs will join the females later in the season to fertilize the eggs, and females will then carry these eggs in their abdominal flaps for up to 12 months before they hatch. After hatching, king crab larvae resemble tiny shrimp. These larvae are called zoea, and unlike their adult counterparts, they are able to swim. They do not spend any time with the mother crab.

King crab larvae will molt up to five times in the first few months of their lives, and they then metamorphose into what is called a “glaucothoe.” This is a sort of in-between stage of growth for king crabs, which is similar to how many insects have a juvenile stage that essentially looks like a less-developed adult version of the creature.

As an example, fisheries follow the “three S” rule: size, sex and season. Only male crabs may be harvested, and they must be above a certain size threshold. Additionally, they are only allowed to be harvested outside of the mating and molting season. This helps to ensure that the species is able to replenish itself.

Populations in the Barents Sea are estimated to be around 20 million, and the numbers in the Bering Sea are slightly lower.

King crabs are opportunistic carnivores. This means that they eat meat, but they are not picky about where the meat comes from. They will eat almost any invertebrates that are smaller than they are, and they will even eat smaller king crabs if they can crush them with their pincers.

Why is king crab so expensive?

Ultimately, the price of king crab is dictated by supply and demand. Because there is only a limited amount of king crab that can be harvested each year, the demand often exceeds the supply. This is also why king crab prices can fluctuate so much as well.During seasons when there is an abundance of crab to be harvested, prices may drop somewhat. In seasons where populations are lower and regulations are tighter, prices often rise because the supply is even more limited.

How big does a king crab get?

In general, king crabs are one of the largest crab species. The males grow larger than the females, and it is common for them to be as heavy as 11 pounds and to have a leg span as long as 5 or 6 feet.To put that in perspective, the average domestic cat weighs about 11 pounds, and the average height for an American female is 5 feet 4 inches.The largest king crab on record weighed in at an astounding 28 pounds, which is as heavy as a small, stocky dog such as a dachshund or corgi.

Despite their size and their spiny shells, king crabs are not particularly aggressive or dangerous to humans. The profession of king crab fishing is dangerous for other reasons.

Why is king crab fishing so dangerous?

A number of factors all work together to make Alaskan crab fishing one of the most dangerous occupations.First, it’s important to remember how heavy king crabs are. Fishermen must haul up huge nets or cages that are soaking wet and full of large, live crabs. These nets or pots can weigh hundreds of pounds each, and everything is wet and slippery.In addition, the fishing waters are often rough, unpredictable and freezing cold. Because the fishing season occurs during the coldest part of the year, there is also the potential for strong, icy winds and dangerous winter storms to make the process even more treacherous.


What Kingdom do King Crabs belong to?

What phylum do King Crabs belong to?

What class do King Crabs belong to?

What family do King Crabs belong to?

What order do King Crabs belong to?

What genus do King Crabs belong to?

What type of covering do King Crabs have?

King Crabs are covered in Shells.

In what type of habitat do King Crabs live?

What is the main prey for King Crabs?

What are some predators of King Crabs?

Predators of King Crabs include humans, larger fish, and octopuses.

What is the average litter size for a King Crab?

The average litter size for a King Crab is 7.

What is an interesting fact about King Crabs?

King Crabs can have a leg span of nearly 2 meters!

What is the scientific name for the King Crab?

The scientific name for the King Crab is Lopholithodes Mandtii.

What is the lifespan of a King Crab?

How fast is a King Crab?

A King Crab can travel at speeds of up to 7 miles per hour.