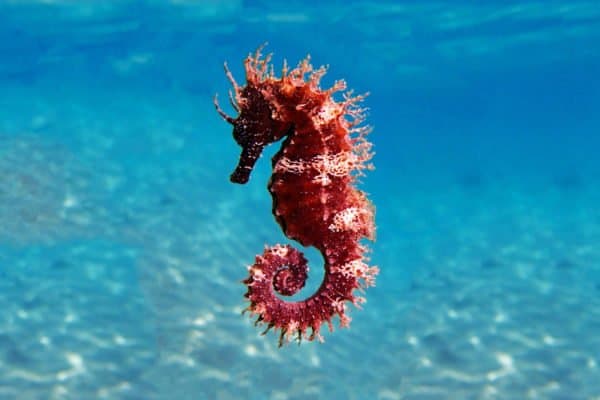 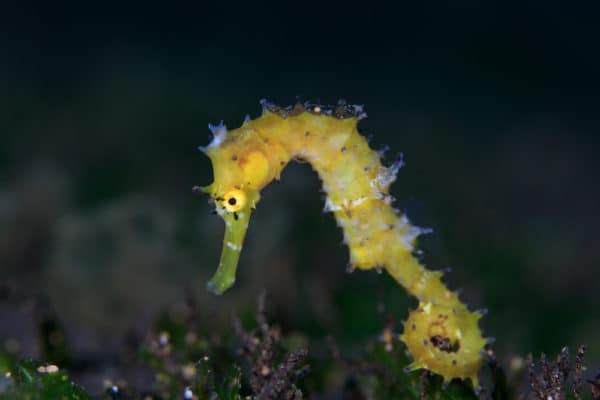 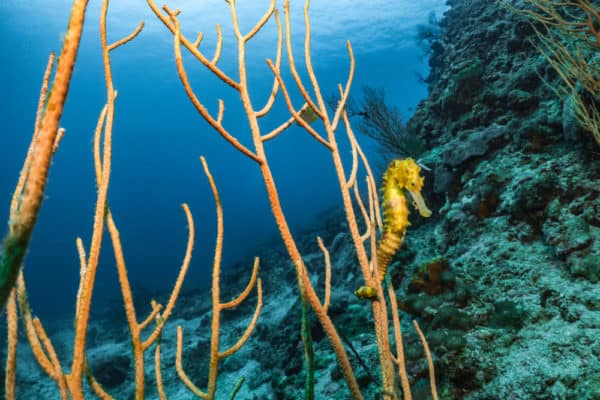 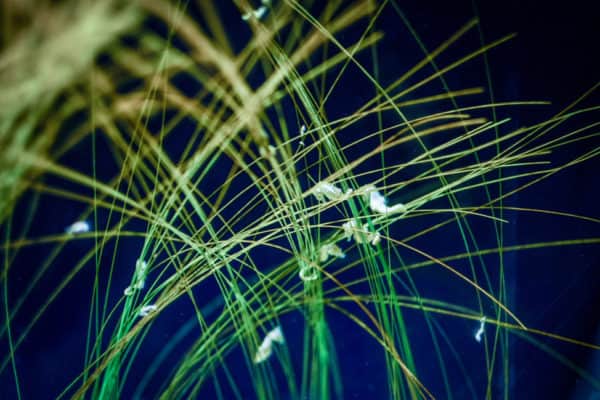 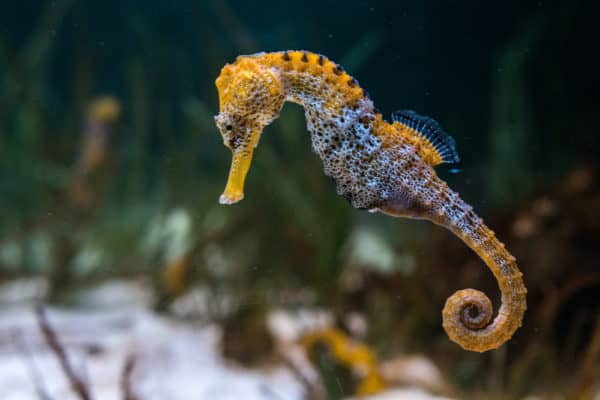 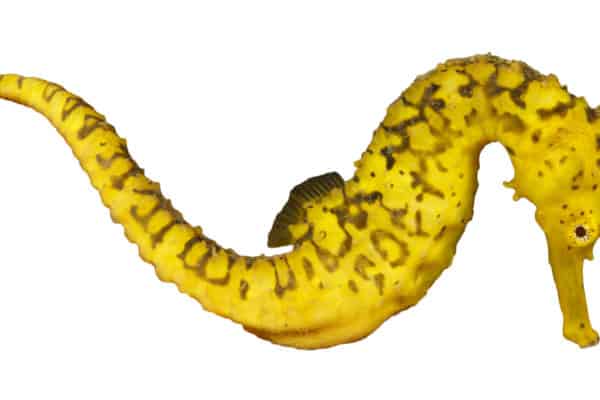 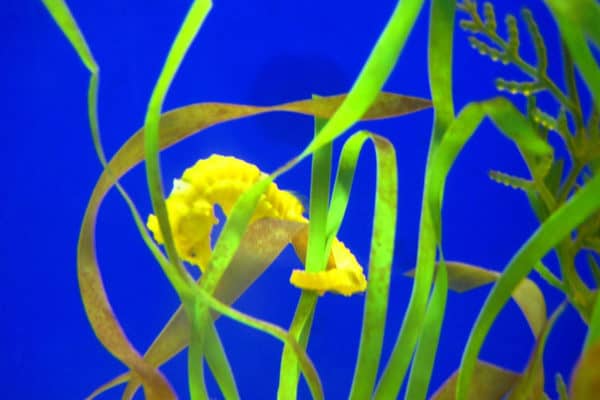 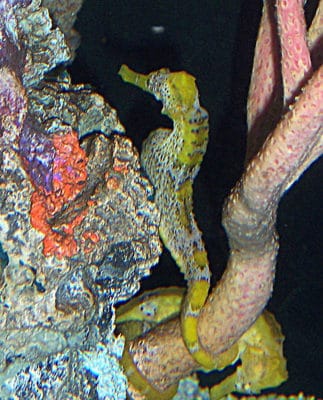 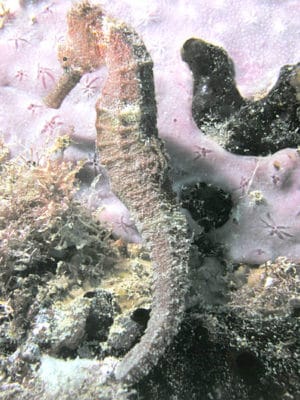 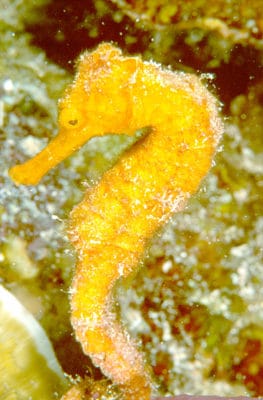 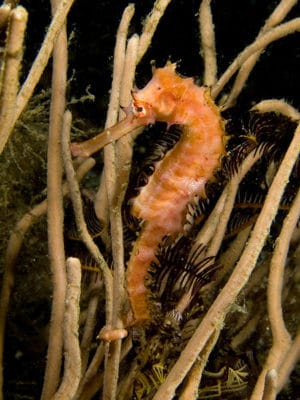 “The seahorse has a head that resembles a horse, the tail of a monkey, and a pouch like a kangaroo. And that’s just the beginning of ways seahorses are completely unique in the animal kingdom!”

The seahorse is a small family of vertebrate species that is found in the tropical shallows and temperate waters around the world. The seahorse is also commonly found around coral reefs where there is plenty of food and places for the seahorse to hide.

Seahorses belong to the family Syngnathidae, which as of late 2020 included 322 identified species, 12 of which were discovered in the prior decade. The seahorse is most closely related to pipefish and seadragons. The seahorse does not have scales like most fish and instead, the seahorse has a bone structure that is made up of little plates and covered with a thin layer of skin.

There are 46 recognized species of seahorse found in all saltwater types worldwide, with the exception of the polar regions and non-temperate coastlines. Seahorses are generally small animals averaging around 10cm in height although this is dependent on the species. For example, the big-belly seahorse can reach 14 inches (35 cm) in length. Below, we’ve detailed selected types of seahorses.

The dwarf seahorse lives across the Gulf of Mexico, the Bahamas, and Florida. It reaches a max length of just 5 cm and has been named the world’s slowest fish by the Guinness Book of World Records. The dwarf seahorse is popular in aquariums but faces threats related to habitat loss.

The pygmy seahorse lives in the Western Pacific offshore Indonesian islands and northern Australia at depths ranging from 16 to 40 meters. It prefers living near soft corals. The species is one of the smallest seahorses, measuring a maximum of just 2.4 cm. Pygmy seahorse have a unique appearance, with red bulbous tubercles across their body that allows them to seamlessly blend in with coral reefs and a short snout.

The big-belly seahorse is found in southern Australia and New Zealand. The species can reach 35 cm (14 inches) in length, making it one of the largest seahorse species. Belly-Belly seahorses are nocturnal and live in depths ranging from 0 to 104 meters of water.

The zebra seahorse gets its name from its black and white alternating stripes that look very similar to zebras. The species was first described in 1964 and relatively little is known about the species. Its found off the coast of Australia’s Queensland state along reefs and reaches a maximum length of 8 cm.

The giant seahorse reaches up to 30 cm (12 inches), which makes it slightly smaller than the big-belly seahorse. The species lives in reefs along the Eastern Pacific. Its range stretches from a northern limit of San Diego down to the Galapagos Islands. The species was assessed by the IUCN as Threatened in late 2016.

Barbour’s seahorse grows up to 15 cm (6 in) and lives along islands and reefs near Indonesia and the Philippines. The species prefers hard coral reefs. It was assessed in 2017 as Vulnerable by the IUCN.

Found from Tanzania down to South Africa, the giraffe seahorse lives across Africa’s coast in waters ranging to 45 meters of depth. The species prefers seagrass and algal beds

The tiger tail seahorse is found throughout Southeast Asian waters and can grow to nearly 20 cm (8 inches). The species is monogamous and lives along reefs and aquatic vegetation such as sponge gardens. With a “tiger-like” striping across its body, the species is a popular choice for aquariums. However, since 2013 the species has been assessed as Vulnerable by the IUCN.

Spiny seahorse gets its name from the “thorn” objects that cover its body. The species has a long snout and one of the most distributed ranges of all seahorses. Spiny seahorses have been identified across much of the Pacific Ocean and across the Indian Ocean as well. The species has been assessed as Vulnerable by the IUCN and face threats from habitat destruction.

Seahorses are one of the most unique-looking animals in the world. Their head resembles a horse, they have a pouch like a kangaroo, and their tail is prehensile for gripping objects, like a monkey. In addition, their body is covered by a series of bony plates and they have tiny “wings” (which are dorsal fins) for guiding them slowly and clumsily through the water.

Seahorses are masters of camouflage, with the color and even textures of different species closely matching their environments, which helps them hide from predators. One species, the pygmy seahorse (Hippocampus bargibanti), has such extreme camouflage that the species was first discovered in 1970 after the coral colony had been collected for an aquarium and it was later realized there was a new species of seahorse on the coral!

Seahorses move via their dorsal fins, which resemble tiny “wings” on their back. However, their movement is extremely plodding and the Guinness Book of World Records has ranked the dwarf seahorse as the slowest fish in the world. During storms and adverse weather, seahorses will use their prehensile tail to grip objects to prevent getting tossed around by rough waters.

The seahorse’s snout is normally long and thin, which allows them to probe into coral and other sea vegetation to suck up small invertebrates and other food. Their jaws are fused together and don’t chew food.

Seahorses are found across the world’s oceans, but most species reside in tropical or warm, temperate waters. The densest concentration of species in in Southeast Asia and the Western Pacific where a number of species live in different habitats.

Generally, seahorses prefer soft coral environments and live in offshore reefs that rarely exceed 100 meters in depth. However, habitats the species can also be found in include kelp, eelgrass, open water, grass beds, and many other environments that feature aquatic vegetation the seahorse can cling to or blend in with.

Seahorses have a number of distinctive features which help them survive in their marine environments. The seahorse has a long snout for sucking in food and a long tail which the seahorse uses both for moving through the water and also for clinging onto coral and aquatic plants, which the seahorse does by curling this long tail around things in order to anchor itself down.

The seahorse is primarily a carnivorous animal. It sucks food into its body through its elongated snout which lacks teeth or the ability to chew. The seahorse primarily feeds on brine shrimp. plankton, tiny species of fish. Though primarily carnivorous, seahorses will occasionally feed on plants such as algae and seaweed. Because the seahorse lacks a stomach, it has to almost continuously feed, sometimes consuming a fourth of its body weight in a single day!

Due to the small size and vulnerability of the seahorse, the seahorse has numerous predators within its natural environment. Crustaceans such as crabs, fish, and rays are all common predators of the seahorse. Predator fish species such as the bluefin tuna have also been discovered with seahorses in their stomach. However, humans who harvest the seahorse for use in medicine are their primary threat (see more in our population and conservation status section).

The seahorse is also vulnerable to bad weather as in storms, seahorses are often thrown from the place that they were clinging onto and onto the shore.

The sea horse is best known for the remarkable fact that the male seahorse is the one that actually carries the eggs before they hatch. In most other animal species the female is the one to protect the offspring until birth. Instead, the female seahorse lays her eggs (anywhere between 5 to more than 1,000 eggs are laid depending on the species of seahorse), into the male’s brooding pouch where they remain until they hatch within around 3 to 6 weeks later.

The birthing process is best illustrated in a short video, which you can see below:

After birth, seahorse offspring will cling to objects but are extremely susceptible to predators. In general, a very low percentage of seahorse babies (called “fry”) will survive. This depends on the species, but for some can be lower than 1%.

As of late 2020, two seahorse species are listed as Endangered and 12 are identified as Vulnerable by the IUCN. The primary threats to the species include habitat loss and their use in traditional Chinese medicine.

The loss of coral reefs and also seabeds that house seahorse has accelerated the decline of many species in recent decades. A study on the white’s seahorse found that significant habitat loss was the primary contributing factor to population declines.

In addition, traditional Eastern medicine (spanning several countries) values dried seahorses for their purported benefits for impotence and other medical disorders. There is no known scientific basis for these claims, but dried seahorse retails for nearly the price of gold in many Asian markets. Overfishing for traditional medicine has put pressure on many species, including pygmy seahorses.

View all 69 animals that start with S

How old are seahorses?

The oldest fossil record of seahorses dates back 13 million years.

Are seahorses kept as pets?

Seahorses are kept as pets, although its recommended for expert hobbyists. Keep in mind that many seahorse species face declining populations from habitat loss and overfishing for traditional medicine. If you’re looking for pet seahorses, they’re considered difficult pets to keep. They require large saltwater tanks (generally above 30 gallons) and fare better in large groups.

Seahorses are slow-moving fish that rely on camouflage for their survival. They face a number of predators such as sharks, crabs, and rays. Scientists studying bluefin and yellowfin tuna have discovered seahorses in the bellies of tuna they studied. In general, most predatory fish that patrol shallow water environments will eat a seahorse if given the opportunity.

What do seahorses eat. Are they carnivores?

Seahorses are generally carnivorous and will eat a diet of amphipods, smaller shrimp, fish larvae, and other small meals they can “vacuum” into their elongated snouts. In addition, seahorses will occasionally eat kelp, seagrass, and algae. However, this is not the primary food of seahorses.

What's the largest species of seahorse?

The big-bellied seahorse is generally considered to be the largest species and can reach up to 14 inches in length. The giant seahorse (sometimes called the Pacific seahorse) reaches similar lengths and has been measured at up to a foot in length.