Click through all of our Fiddler Crab images in the gallery. 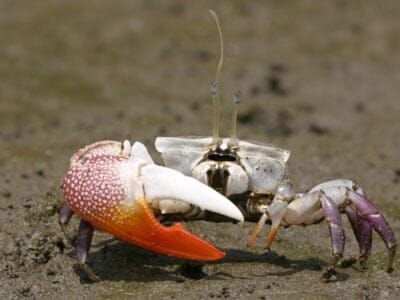 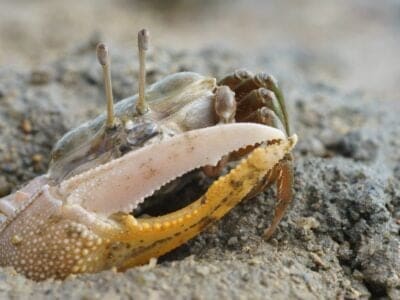 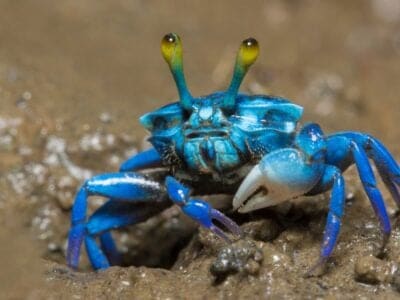 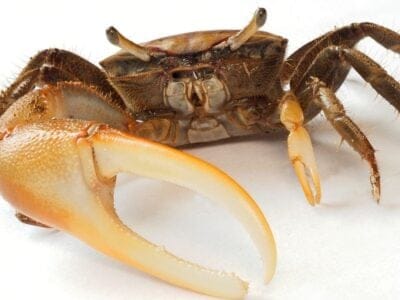 View all of the Fiddler Crab images!

The fiddler crab is one of over 100 species of crabs that live on both land and sea. Most often found along intertidal areas of lagoons and mudflats, they can also be found on sandy beaches. While some tolerate saltwater, most prefer the brackish water along the intercoastal areas.

The fiddler crab is in the phylum Arthropoda, subphylum, Crustacea, class, Malacostraca, order, Decapoda, Infraorder, Brachyura, family, Ocypodidae, and genus Uca. There are 106 recognized species of fiddler crabs. Also known as calling crabs, they are most closely related to ghost crabs.

One of the adaptations that all fiddler crab species share is the enlarged claw of the male. While this claw is useful for attracting a mate, it makes him less efficient than the females when sifting through the sand for meals.

Of the 106 species of the fiddler crab, a few of the most common are the fresh-water fiddler, spined fiddler, and panacea sand fiddler. The fresh-water fiddler, also known as the red jointed fiddler’s range extends from Massachusetts to the central part of eastern Florida. It also extends from the western central coast of Florida to Louisiana. Its body, or carapace, can reach 33 mm in width. It prefers freshwater marshes and areas of low salinity and is most commonly found near the mouths of rivers.

The spined-fiddler crab lives along the Gulf of Mexico, from Tabasco Mexico, into the United States, as far east as Alabama. Their carapace can reach a width of 23 mm. They prefer fresh to brackish water and prefer areas with clay, mud, or a mixture of clay and sand substrata. They are most commonly found in marshes and intertidal banks.

The Panacea sand fiddler lives along the Gulf of Mexico, from Panacea, in the Florida panhandle, to the Tabasco-Campeche border in Mexico. Their carapace can reach up to 18 mm in width. They are found in intertidal salt marshes and sand flats.

The most distinctive feature of the fiddler crab is the extreme size difference between the two claws on the male. The male waves the enlarged claw back and forth rapidly when attempting to impress a female. The female selects her mate based on not only the size of the claw but also on his “fiddling” display.

The male of the species has a brighter body, or carapace, than the female. It is typically blue to purple-gray, with brown or black spots. The females have more subdued brown or black carapaces.

The crabs have a square-shaped body, a smooth carapace, and long, slender eye stalks. The different species of fiddler crabs range from one to two inches long.

The fiddler crab lives in many areas throughout the world. In North America, they live along the eastern seaboard (the western Atlantic), Gulf of Mexico, and west coast (eastern Pacific). They also live in the Indo-Pacific, parts of the Portugal coast, and West Africa.

Although raccoons will catch and eat fiddler crabs, the biggest threat to these animals comes from the sky. Egrets, herons, terns, and other waterfowl all consider the fiddler crab an excellent food source. One of the adaptations the fiddler crab has is its ability to close off its burrow with a small scoop of mud or sand. This allows the crab to hide from predators until the threat passes. While fiddler crabs are generally territorial, when hiding from danger, they will take advantage of the nearest burrow.

Other animals do not need to worry about being eaten by the fiddler crab. Their diet is made up of bacteria, decaying plants, and algae. They use their claws and mouth to sift through the mud and sand for food.

In preparation for mating, the male fiddler crab builds a burrow. He then stands by the opening, waving his enlarged claw to attract attention from females. If the female shows interest, the male will run between her and the burrow several times until she follows him in or leaves the area.

After mating, the female remains in the burrow for two weeks, incubating eggs. At the end of this period, she leaves the burrow and releases the eggs into the water. There, they hatch and mature.

Only the male has an enlarged claw on one side. The male is also more brightly colored than the female.

Fiddler Crab in Fishing and Cooking

While this crab is edible, it is so small, it doesn’t provide much meat. Preparing the crab for eating is more trouble than it is worth. They are a good bait choice when fishing for inshore fish, such as redfish and black drum.

What is a fiddler crab?

The crabs have a square-shaped body, a smooth carapace, and long, slender eye stalks. They range from one to two inches long. The male has one oversized claw and is more colorful than the female.

What does a fiddler crab eat?

Why do fiddler crabs have a big claw?

To attract a mate.

What do fiddler crabs get eaten by?

Waterfowl such as herons and small predators such as raccoons.

Although they live together communally, they will defend their burrows.

Can you eat a fiddler crab?

You can, but their small size makes it impractical.

How many fiddler crabs can I put in a 10 gallon tank?

Four fiddler crabs can live comfortably in a 10-gallon aquarium.

Will fiddler crabs pinch you?

They can, and although a pinch shouldn’t be too painful, it is important to take care when handling them. Be gentle when picking them up and placing them in the aquarium, and don’t startle them when feeding or cleaning the tank.

How long can a fiddler crab stay underwater?

One of the adaptations that make the fiddler crab different than other crabs is that it is semi-aquatic. While it has gills, it needs to breathe oxygen. The gills need to be moist to work properly. While they can survive up to 2 days out of the water, they will not survive if left in a tank without access to dry ground.

Can fiddler crabs swim to the surface?

Yes, they are semi-aquatic, meaning they live on both water and land. When setting up an aquarium, it is important to have a sandy substrate built with an incline. This allows the crab to move in and out of the water on its own.

They also need some rocks in the tank, to provide hiding spots. Finally, you can care for a group of fiddler crabs, but there should be only one male in the group to prevent fighting. 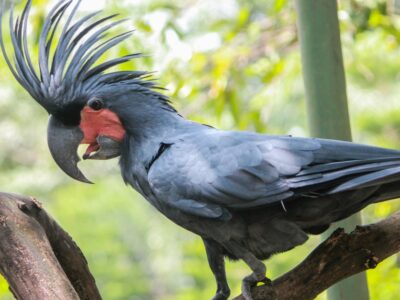 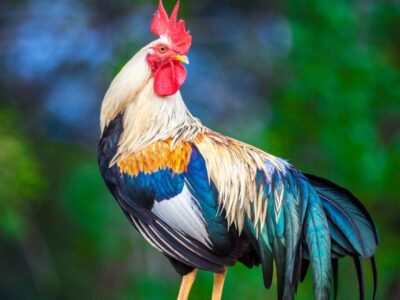 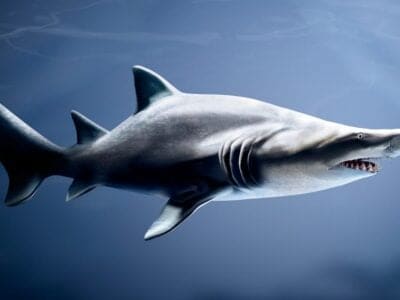 Do Sharks Have Bones? 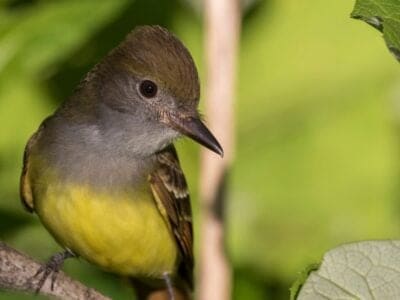 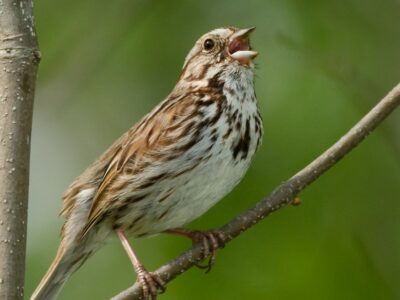 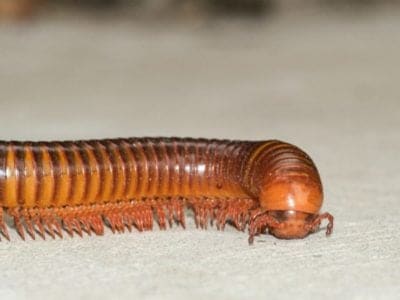 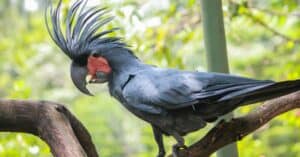