iStock.com/RLSPHOTO
Share this post on:
More Great Content:
What Do Cuttlefish Eat? The 10 Favorites…
10 Impressive Cuttlefish Facts
The Biggest Alligator ever Found in South…
Lake Mead Is So Low It's Revealed…
Discover the Little-Known U.S. River Gorge That's…
The 5 Healthiest Vegetables Dogs Can Eat…

You may not have realized that there is a difference between a cuttlefish vs squid, but there are quite a few! Not only are these creatures from different genuses or classifications, but they have very different appearances and life cycles. While cuttlefish are members of the Sepiida order, squid are members of the Teuthida order. But this is only where their differences begin.

In this article, we will address all of the differences between these two sea creatures, including their physical appearances, reproductive habits, and preferred habitats. Let’s get started so that you can learn how special both cuttlefish and squid are!

Key Differences Between Cuttlefish vs Squid

There are many key differences between cuttlefish vs squid. Given their extremely different species classifications, cuttlefish look very different from squid. Cuttlefish come in a wide variety of colors, while squid are often more neutrally colored- however, they are both capable of changing colors based on their environments. Squid also grow far larger than cuttlefish, and their reproductive habits differ greatly.

Let’s go over all of these fascinating differences in detail now.

One of the main distinguishing features between a cuttlefish vs squid is their average size. While both of these animals have a wide variety of species, squid are much larger than cuttlefish. Let’s go into their size differences in more detail now.

The majority of cuttlefish measure anywhere from 6-20 inches long and weigh 6-25 pounds, while squid measure a huge range, from 1 inch-50 feet and weighing in anywhere from a single pound to over 1,000 pounds! This is because squid have a few extremely large species, such as the giant squid and colossal squid.

Another difference between cuttlefish and squid lies in their reproductive habits. Cuttlefish lay anywhere from 100-300 eggs, while squid are capable of laying thousands of eggs at one time. Female squid are also capable of choosing when to fertilize their eggs once they have received sperm from a male squid. This way, they can choose when it is convenient for them to lay eggs, while some cuttlefish do not have this luxury.

Cuttlefish also watch over their eggs for a month or two until they hatch, while most squid lay their eggs on the seafloor and move on with their lives. While this may seem cruel, this is true of a wide variety of animals. Cuttlefish also die shortly after laying their eggs, but this is not the same for many squid.

Cuttlefish vs Squid: Appearance and Colors

Another difference between a cuttlefish vs squid is their physical appearance and color. Cuttlefish are found in a variety of colors, from silver to blood red, while squid are typically more neutral in color. However, given that both of these creatures can change their coloring based on their location, this fact may be disputed by certain species.

There is one telltale way that you can pick out a cuttlefish from a squid. Cuttlefish have fanlike fins on either side of their round and wide head, while squid do not. Squid heads are also longer and thinner compared to cuttlefish heads, often more torpedo-like than helmet-like. The tentacles and arms of squid are typically longer than cuttlefish as well.

Cuttlefish have pupils different from squid. The average cuttlefish has pupils in the shape of an M or W, while squid have round circular pupils. While you may never get close enough to either of these two creatures to see this difference, it’s another cool fact about them!

Another difference between cuttlefish and squid is their individual lifespans. While it depends on the specific species or type of both of these animals, cuttlefish live an average of 1-2 years, while squid typically live over 5 years. However, there are some types of squid that also live an equally short amount of time, especially when you consider their size and typical predators.

Cuttlefish live in slightly different locations from squid. While both of these creatures live throughout the world in our oceans and seas, cuttlefish enjoy deep oceans at a variety of temperatures; squid prefer colder climates. However, this isn’t to say that squid don’t also enjoy deep seas. The giant and colossal squid are both found at incredibly deep depths! Many cuttlefish and squid enjoy the same habitats and ecosystems together as well. 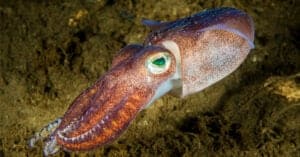 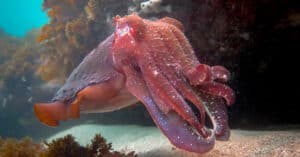 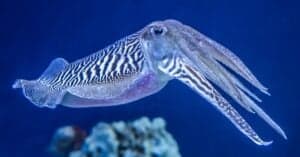