Written by Hailey Pruett
Published: May 11, 2022
© iStock.com/ca2hill
Share this post on:
More Great Content:
The 10 Best Lizards to Keep As…
Types of Lizards: The 15 Lizard Species…
The 10 Largest Lizards in the World
Are Komodo Dragons Poisonous or Dangerous?
9 Incredible Lizards That Look Like Dragons
Lizard Poop: What Does It Look Like?

California is home to an incredibly wide range of wildlife, including its reptile population! In fact, the Golden State has more than 50 unique species of colorful, visually striking lizards living in it, from tiny geckos to impressively large iguanas. Let’s take a closer look at 10 of California’s most stunning lizards below.

The banded rock lizard likes it hot, making it right at home in California! It is mainly native to the southwestern US and northern Mexico, mainly preferring to spend most of its time in dense shrubland and rocky outcrops. Here, it seeks out small insects and spiders as well as lots of the surrounding vegetation to munch on. Since it’s an omnivore, it isn’t too picky.

The first thing you’re likely to notice about the banded rock lizard is its wide, flat, mottled grey and brown body. Additionally, similar to some collared lizards, it has a thin black “collar” stripe across the back of its neck, making it easy to identify. The typical banded rock lizard measures around 3 to 5 inches from snout to vent, with its tail making up much of its body length and usually measuring around 4 to 6 inches long on its own.

Notably, the species is quite sexually dimorphic. Males tend to have bright blue spots across their bodies and under their throats. Females, on the other hand, are drab in coloration.

The common chuckwalla is a substantial reptile with a bulky, muscular body. It commonly reaches upwards of 15 to 20 inches long from its short, pointed snout to the tip of its wide, heavy tail. Interestingly, it is the United States’ second-largest native lizard, with only the Gila monster just barely edging it out in size.

This lizard’s geographic range is mainly limited to the dry, arid southwestern US, from western Arizona and Utah to eastern California and stretching down into northern Mexico. As a diurnal species, it is most active during the day. It spends much of its time sunning itself on wide, flat rocks in the rocky outcrops and shrublands it inhabits.

Common chuckwallas can present in a variety of colors and patterns, though solid grey and brown are most common. Irregular color splotches in shades of tan, yellow, and even red are also typical. Males tend to be darker in color than females. Juvenile chuckwallas usually have lighter-colored bands on the tail, which females of the species occasionally retain in adulthood.

This particular species is one of California’s most common and widespread lizards! It has massive populations throughout the hottest and driest areas of the state, primarily in the southern half.

There are two unique subspecies of this lizard living in the Golden State: the Nevada and Western varieties, both of which are very similar in size and appearance and only slightly different in scale pattern. They do, however, differ significantly in geographic range; the Nevada variety tends to venture much further north. It has mainly established its population along California’s northeastern and Nevada’s western borders.

True to its name, the common side-blotched lizard has prominent brown or black splotches on its sides near its front legs. The rest of its body is a mottled brown and grey with tiny, scattered lighter-colored spots. Males are more colorful than females of the species and often have blue or orange spots on their throats. Both sexes are small in size, measuring just around 4 to 6 inches from snout to tail tip.

Night lizards are a fascinating group, as superficially, they resemble geckos, but they’re actually more closely related to skinks! The desert night lizard in particular mainly resides in southeastern California, where its favored habitat is dry, hilly shrubland. It is one of many lizards capable of caudal autotomy, also known as tail dropping, in which it is able to sever its own tail as a defense mechanism.

The desert night lizard is also quite small, measuring roughly 2 to 3 inches from snout to vent. Including its total possible tail length, though, it can be closer to 4 to 5 inches long. Its eyes are fairly large and round and lack movable eyelids. A variety of colors and patterns are possible, though the most common is a dull, mottled grayish-brown with a white belly.

A little-known fact about these bizarre lizards is they often live in large family groups! Their social hierarchy is surprisingly complex. This behavior is quite rare for reptiles, as their young tend to be self-sufficient immediately after hatching.

The San Diego horned lizard was once actually one of the six subspecies of the coast horned lizard! Today, however, it is considered its own distinct species. It is especially abundant along California’s west coast. Like most horned lizards, it is capable of a pretty hardcore defense mechanism: shooting blood from its eyes!

Also like other horned lizards, the San Diego (also known as the Blainville) variety has a very short, squat, round body covered in tiny spikes. Adults measure only around 4 to 5 inches long from their snouts to the tips of their short, pointed tails. The lizard’s head is crowned by a row of prominent, upward-pointing horns. Color varies significantly from mottled brown and grey to shades of yellow and even orange.

This species can be differentiated from many other horned lizards by its two distinct rows of pointed spines along the sides of its body; most other subspecies have just one row of said spines. It also typically has two to three rows of large, triangular pointed scales under its throat.

Another very common lizard throughout southern California is the western banded gecko. As a member of the Eublepharidae family, it is one of just a handful of species to possess thick, movable eyelids, which help keep sand and other debris out of its eyes. Additionally, instead of sticky pads on its feet, it has tiny claws, which are also far better suited to the lizard’s dry, desert-like habitat.

Notably, there are two subspecies of the western banded gecko: the desert banded gecko and the San Diego banded gecko. Both are very similar in appearance and small in size, though the desert variety is sometimes spotted rather than striped. The San Diego variety is easily identifiable by the long, C-shaped stripe at the base of its neck.

The Great Basin collared lizard mainly resides in southeastern California. However, it has also established small populations along the state’s northeastern border. It tolerates extreme heat very well and is mainly active during the day. Its preferred habitat type is dry, rocky scrubland.

Like most collared lizards, this particular species also has trademark collar-like black bands across the top of its neck. It is a somewhat large lizard, measuring around 3 to 5 inches long from snout to vent. Its tail is very long and narrow, usually more than twice the length of its body, adding another 4 to 6 inches to its total size.

As a sexually dimorphic species, males tend to be more vibrant and colorful than females. Males are also easily identifiable thanks to their comparatively wider heads, dark-colored throats, and black spots near the vent.

There are actually three total subspecies of the tiger whiptail lizard residing in California. These are the California, San Diegan, and Great Basin varieties. All three have a similar geographic range stretching throughout central and southern California. The California variety, however, is the most widespread.

The three known subspecies of the tiger whiptail are also similar in size and general appearance. True to their name, they have long, thin, whip-like tails, which make up more than half of their body length. Including their tails, they are around 10 to 12 inches long. The typical tiger whiptail is dark brown to black in color with small, irregular lighter-colored spots.

Another notable trait of the tiger whiptail is its impressive speed. They are extremely fast-moving and skittish, making them difficult to observe in the wild.

Of the three total species of alligator lizards residing in California, the southern variety is the most common and widespread. Three of its five total subspecies have established themselves throughout the Golden State’s western coast. All are very similar in size and appearance, and their geographic ranges overlap heavily.

The typical southern alligator lizard has a somewhat long, pointed, triangular snout and a very long, thin body. Much of its body length is composed of its thin tail. From snout to vent, it is roughly 4 to 7 inches long. Including its tail, however, it can reach over 12 inches in length!

Scalation and scale patterns vary somewhat, but most individuals are light brown in color with both lighter and darker horizontal bands stretching from the base of the neck down to the tail. These horizontal bands can be red, brown, black, and even grey in color.

Interestingly, the southern alligator lizard is extremely adaptable. It is able to thrive in a wide range of habitats, from dense, humid forests to dry, rocky scrublands.

True to its name, the yellow-backed spiny lizard has alternating yellow and dark brown horizontal bands stretching from its neck all the way down to the tip of its tail. It primarily resides in southeastern California, where it prefers a dry scrubland habitat. At around 4 to 5 inches from snout to vent, it has a very short, stout body. Its tail adds another 3 to 5 inches to its total body length.

Also, as its name suggests, the lizard is covered in heavily keeled, outward-pointing scales. This unique scalation gives it its “spiny” appearance. The scales are especially pointed around the head and neck, making it look superficially similar to a bearded dragon.

As a sexually dimorphic species, males and females differ slightly in appearance. Male yellow-backed spiny lizards often have blue splotches on their throats and bellies, while females are drab in color. 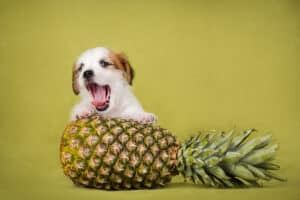