iStock.com/Peter Fleming
Share this post on:
More Great Content:
What Kills Bed Bugs Instantly?
What Eats Spotted Lanternfly: Do They Have…
How To Get Rid of Roaches Overnight
The 10 Largest Ants In The World
The 10 Largest Grasshoppers In The World
5 Early Signs Of Bed Bugs: How…

Have you ever watched a grasshopper jumping from plant to plant in a field? Maybe you’ve seen a grasshopper sitting on a flower in your backyard garden. It’s definitely not a rarity to see a grasshopper considering there are over 11,000 species of this insect worldwide. Some are tiny like the pygmy grasshopper at less than three-quarters of an inch in length. Others are very large like the hedge grasshopper which can grow to a length of three and a half inches!

These insects can be brown, yellow, olive, or even bright green. Some have stripes while others are solid in color. They have antennae, big eyes, and strong hind legs that send them into the air. Whether it’s a small one with stripes on its body or a big green one with red antennae, one question comes to mind: Do grasshoppers bite? Check out this page to fingure out if grasshoppers bite. In addition, learn what these insects eat, how they eat it, and when they are active. Prepare to learn some amazing facts about these dedicated jumpers!

Yes, grasshoppers bite. But, when they bite, it’s usually on a piece of food and not a person. Grasshoppers need to tear their food into pieces in order to eat it. But, they don’t have teeth. Instead, they have features called mandibles.

If you looked really, really closely at the mandibles of a grasshopper you’d notice that they face in a downward direction. This makes it easy to grab onto a leaf and chew it. Think of a grasshopper’s mandibles like a pair of scissors cutting off a tiny piece of leaf, then grinding it down to mush. As a note, the Latin word mandible means jaw.

What Does a Grasshopper Eat?

Grasshoppers are omnivores, but the main part of their diet is plant life. They eat leaves, flowers, stems, fungi, and grass. These insects venture outside their plant diet when plants are not plentiful in their habitat. When this happens, they eat small spiders and tiny flying insects like gnats. The insect has to be small and easy to subdue because grasshoppers are not predators. In addition, they sometimes eat rotting meat and even animal dung, also known as poop.

As you see, looking at the features of an insect can sometimes tell you what type of food it eats.

Is a Grasshopper’s Bite Harmful to a Human?

So, if you picked up a grasshopper would it bite you? The answer is probably not. But do grasshoppers bite humans? Yes, they are capable of biting humans. Someone bitten by a grasshopper may feel a tiny pinch but would probably feel nothing at all. Remember, a grasshopper’s mandibles are designed to cut leaves and stems not human skin.

What Are the Symptoms of a Grasshopper Bite?

Though someone may not feel a grasshopper’s bite, it can cause some mild symptoms to appear on a person’s skin. Sometimes redness and/or swelling appears at the site of the bite. The area may start to feel itchy as well.

How Do I Treat a Bite?

The first thing to do is to wash the site of the bite with warm water and mild soap. After drying the area, apply calamine lotion to relieve the itching. An ice pack can help the symptoms of swelling as well as mild pain. Grasshopper bites aren’t poisonous, and many people have no reaction to them at all. In fact, they may not even be aware they were bitten.

Why Would a Grasshopper Bite a Human?

The chances of being bitten by this insect are very slim. But, like any animal, if a grasshopper feels threatened, it may bite to defend itself. As an example, if a person picked up a grasshopper and held it tightly between their fingers, the insect may feel at risk and bite. But it is more likely to use an alternative way to defend itself.

What Other Defenses Does a Grasshopper Have Against Threats?

Have you ever heard of grasshopper tobacco juice? Well, when this insect feels at risk from a predator or anything else, it sometimes spits a thin stream of brown liquid at the threat. This brown liquid consists of the grasshopper’s digestive juices. Yuck! The liquid is said to have a bitter taste and smells bad. Not surprisingly, when a predator is hit with this smelly juice it is likely to move away from the grasshopper allowing the insect enough time to escape. Plus, the predator knows the insect is going to have an awful taste if it tries to eat it. Of course, a person who picks up a grasshopper can also be hit with this liquid. However, it’s not harmful to a human.

As a note, the liquid a grasshopper spits out is not actually tobacco juice. But it is sometimes called by that name because it’s similar in color. Along with biting and spitting brown liquid, this insect has just two other defenses against predators. One of those is its speed. These insects can jump at a fairly quick speed. They have powerful back legs that propel them several feet. Plus, grasshoppers can fly though only for small distances.

Jumping or flying may result in a predator losing track of the location of its prey. Of course, this tiny insect is more likely to be able to make it to safety while in a field of weeds as opposed to an open area with no cover. Another defense is this insect’s ability to blend into its environment. A brown grasshopper can easily blend into a field or a woodland habitat. A green grasshopper may be able to sit atop or even beneath a green leaf without being seen. This camouflage is sometimes enough to fool a predator into walking right by this insect!

Have you ever heard of locusts? A locust is a type of grasshopper that can change its color over time to blend in with its environment. Speaking of locusts…

Can Grasshoppers Cause Harm to Crops?

Grasshoppers and locusts belong to the same Acrididae family. True grasshoppers live solitary lives and present little threat to crops. Alternatively, locusts live in large groups and certainly have the power to ruin crops. They chew on and eat all sorts of plant life. Tremendous numbers of them sometimes called a swarm, can move across a field eating wheat, spinach, and corn as well as many other types of plants. These insects can do a lot of damage in a relatively short amount of time.

Locusts usually start eating crops as a result of drought and a shortage of food elsewhere in their habitat. When they ruin crops, they are reducing the food supply available to people. This is why they are such an unwelcome sight to farmers.

When Are These Insects Active?

They are active during the day. The sunlight raises this insect’s body temperature giving it the energy to look for food. While most grasshoppers rest at night, there are some species still active at nightfall.

Can a Person Bite a Grasshopper?

Funny question! But, the answer is yes. Grasshoppers are eaten by people across the world. They are a great source of protein! Some people like to roast them while others fry them up. Of course, there are some folks who prefer to eat them uncooked.

Should You Ever Pick Up a Grasshopper?

So, now you know that grasshoppers can bite humans, but rarely do. On the other hand, if someone gently picks up this insect, they are not likely to be bitten or encounter any splash of brown liquid. In fact, the most likely result is the grasshopper will realize it’s been picked up and jump out of the person’s hand. It will try to disappear again into the weeds or grass.

Whether you try to hold one or just study one as it sits on a leaf or flower, grasshoppers are interesting insects and worthy of your attention. 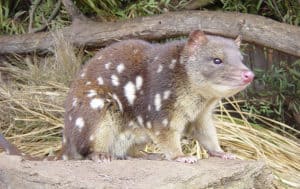