Enough Venom to Kill 289 Humans: Discover 10 Snakes with the Deadliest Bites in the World

The world is packed with venomous snakes. Horned vipers thrive in deserts, the hook-nosed sea snake haunts the depths of the seas, and rattlesnakes are commonly found in mountains and forests. You can’t go many places without being near a venomous snake. Still, it’s worth knowing which of these snakes have the strongest venom of them all. We’ve gathered a list of 10 snakes with the deadliest venom and ranked it by the number of people that a maximum dose of venom could kill! Prepare to be surprised at just how much overkill these snakes can provide.

Many of the snakes with the deadliest venom are incredibly dangerous even when they inject a low or average amount of venom. In fact, we have found that some snakes inject enough venom to kill 100 people. Yet, what happens when we optimize the amount of venom that each snake injects? Take a look and see just how many people a single bite could kill from snakes with the deadliest venom!

The inland taipan is known for being among the most venomous snakes in the world. A maximum dose of its venom is about 110mg from a single bite, and that is enough to kill 289 people and over 1 million mice. This snake only lives in the central and eastern portion of Australia, and it’s feared for the ability to attack quickly and envenomating with every bite.

Interestingly, since the advent of antivenom, there hasn’t been a single recorded fatality from inland taipans in spit of their incredibly powerful venom. That’s because this snake lives in extremely remote areas of Australia’s inland desert, and also because it avoids conflict and would rather slither away than strike at any potential threat.

The forest cobra lives in the lush lowland forests in central and western sub-Saharan Africa. This snake is easily confused for the king cobra because it has a similar hood and raises a section of its body off the ground to strike.

Furthermore, the forest cobra can inject upwards of 1,102mg of venom into its prey, a massive amount compared to inland taipan. The result is enough venom to kill 65 people with a bite. This is one of the snakes with the deadliest venom by sheer volume!

The eastern brown snake is Australia’s deadliest snake. This snake often hunts mice, and that brings them into contact with people. They are swift, slender snakes that can easily land a bite on their prey and then wait for their venom to take hold. Delivering a maximum dose of just 155mg of venom, this snake can bring down 58 people with its bite.

The coastal taipan is another very deadly snake that lives on the northern and eastern coasts of Australia as well as part of New Guinea. This snake has the third most toxic venom of any snake in Australia, and an optimized bite can deliver 400mg of venom which is enough to kill 56 people.

As far as cobras go, the Caspian cobra does not get a lot of recognition. This snake lives in central Asia, including countries like Afghanistan, Turkmenistan, and Kyrgyzstan. The snake has strong venom with a very high mortality rate. This snake can deliver a maximum of 590mg of deadly venom, enough to kill 42 people.

Russell’s viper kills more people in India than any other snake. As a member of the Big 4, Russell’s viper is responsible for 43% of all medically significant bites in the Indian subcontinent. The optimal envenomation dose from this snake is about 268mg, enough to take out 22 people.

The black mamba is the second-longest venomous snake in the world, reaching lengths of up to 14 feet. The snake is quick to bite, and it can move at speeds of 7mph or more over short distances. The snake’s venom is incredibly deadly, capable of killing 19 people with a maximum dose.

Yet, the worst part is that this snake can raise about 40% of its total body length off the ground and then strike multiple times. They’ll often bite the chest, neck, and arms of their human victims! The black mamba is one of the snakes with the deadliest venom by any measure!

The king cobra is the longest venomous snake in the world, measuring up to 18ft in length at its maximum. This very large snake can deliver a very powerful bite, delivering 100mg of venom to its prey. That amount of venom can kill 11 humans.

Another member of the Big 4 in India is the Indian cobra. They are responsible for 12% of all India’s medically significant snakebites, and they have a mortality rate approaching 20%. The snake can deliver a massive 610mg of venom into its prey. That much venom can kill roughly 10 people in a single bite.

The cape cobra is found only in the southernmost nations of Africa. Its venom is very potent and is believed to have a high mortality rate due to it causing paralysis in its victims. The snake’s maximum venom load is 250mg, enough to kill 9 people.

These ten snakes have very potent venom, but that does not instantly make them the most dangerous snakes. We have to consider other factors in making that determination.

A snake having the deadliest venom does not mean it is the most dangerous snake. To be considered truly dangerous, they need a combination of factors. We must consider the potency of their venom, opportunity to attack, and a reasonable amount of venom delivered on average.

For example, the forest cobra can deliver a lot of venom, but it rarely does, and it inhabits places that are not as populated as other venomous snakes’ ranges.

On the other hand, snakes like Russell’s viper are less venomous by potency and injection amount, but they kill far more people every year as one of the Big 4 in India. They live in the same area as over a billion people throughout the world, and the push for new homes and farms brings them into close contact with humans all the time.

When looking at the most dangerous snakes, we can also consider the aggression of the reptile along with other things like whether the snake is noticeable. A rattlesnake has a very specific threat display. Yet, the deadly saw-scaled viper will usually bite without letting itself be known. The saw-scaled is more dangerous in that respect.

The bottom line is that looking for the most dangerous venomous snake requires examining several dimensions and not the venom alone. Knowing the snakes with the deadliest venom is still useful, though.

When Does Baby Cottonmouth Season Start? 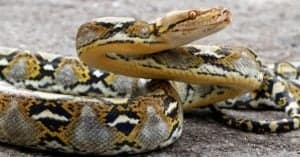 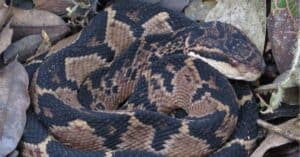 Discover the Largest Viper Ever Recorded

When Does Baby Cottonmouth Season Start?

Discover the Largest Viper Ever Recorded