Gorillas belong to the order Primates. They are the largest primate on Earth and are a member of the great apes. As such, they are closely related to orangutans, chimpanzees, bonobos, and humans. The lineage that includes chimpanzees and humans diverged from a common ancestor with gorillas about 12-17 million years ago. Considering the timeline of mammal evolution (with the first mammal arising 65 million years ago), this is quite recent! The close evolutionary histories of gorillas and humans explain many of the similarities that appear between the species.

What is unique about primate hands?

Gorilla hands share this trait with humans. Having an opposable thumb allows for greater dexterity, tool use, and social interactions. Gorillas are also documented using various gestures for communication, including social grooming. They also use a large array of tools such as rocks and sticks for processing food. Interestingly, in California, a female gorilla by the name of Koko was taught over 1000 different signs for American sign language and could effectively communicate with her handlers. She could understand over 2,000 spoken words and could respond with sign language.

How do gorillas walk?

Gorillas locomote, or walk around, via knuckle-walking. Knuckle-walking is a form of quadrupedal locomotion which is movement on four feet. During knuckle-walking, the ape bends its fingers on its front hands (not quite in a fist) and their middle knuckles strike the ground. Gorillas are the most terrestrial of the non-human great ape species.  Some other apes, like orangutans, are arboreal, meaning they spend more of their time in the trees than on the ground like terrestrial species. Arboreal monkey and ape species rely on brachiation, swinging from branch to branch, more so than quadrupedalism. Gorillas have specialized adaptations to support knuckle-walking that are evident in their hand structure.

The degree of specialization in certain hand and feet bones is related to degree of arboreality even within gorilla subspecies. Gorilla subspecies that rely on knuckle-walking to different degrees have notably different levels of adaptation. The subspecies that spend more time in the trees, have less specialized anatomy. To read more about variation of medial cuneiform morphology amongst gorillas, read here.

How are human and gorilla hands similar?

Human and gorilla hands are incredibly similar. Both have the same skeletal composition: carpals, metacarpals, and phalanges. In many species, including gorillas and humans, carpals are the wrist bones, metacarpals are the hand bones and phalanges are the finger bones. Gorillas, also like humans, have nails on their hands instead of claws. In fact, all primates have nails instead of claws with the exception of marmosets and tamarins. Also, gorillas do not have hair on their palms just as humans do not.

How are human and gorilla hands different?

In addition to adaptations for walking and climbing, a notable difference between gorilla and human hands is their size. The average male gorilla’s hand is 6 inches across and 12 inches long. The average male human’s hand is only 7.6 inches long! Although still not as large as a gorilla’s, Sultan Kösen in Turkey set the record for largest human hand in 2011. The Guinness world record for largest human hand is an incredible 11.22 inches! 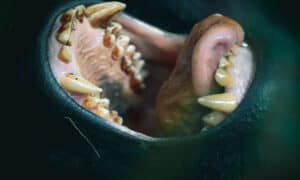 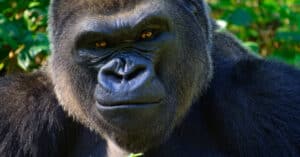 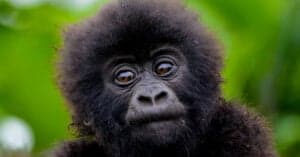