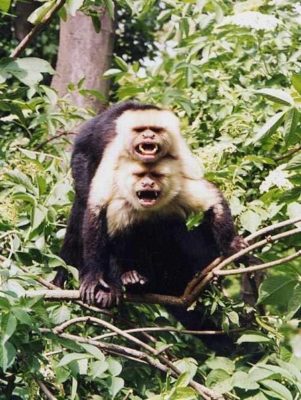 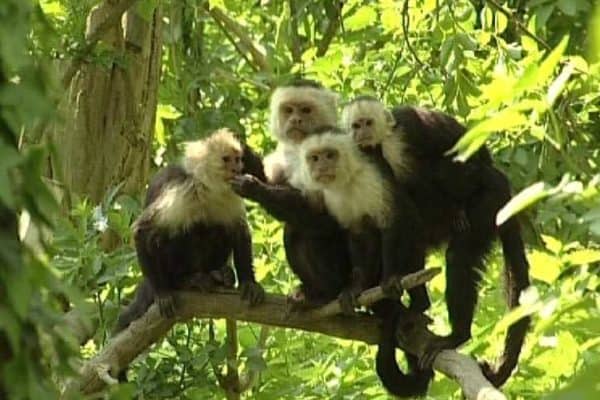 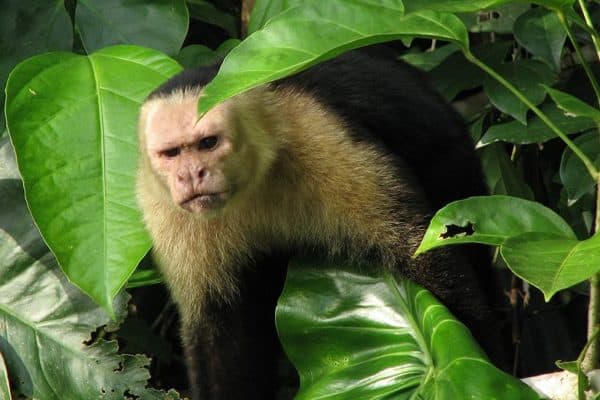 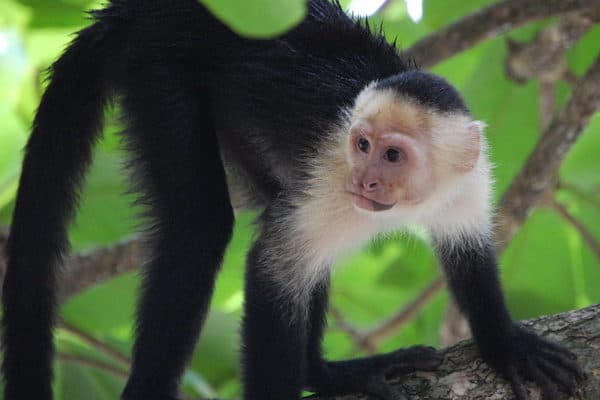 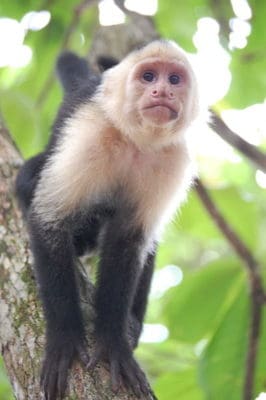 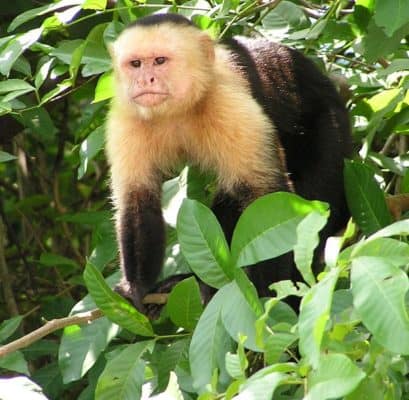 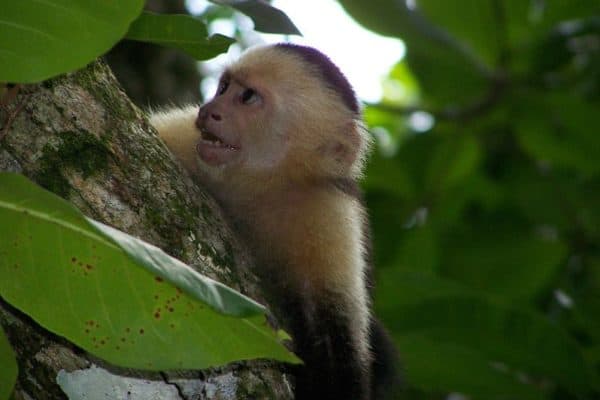 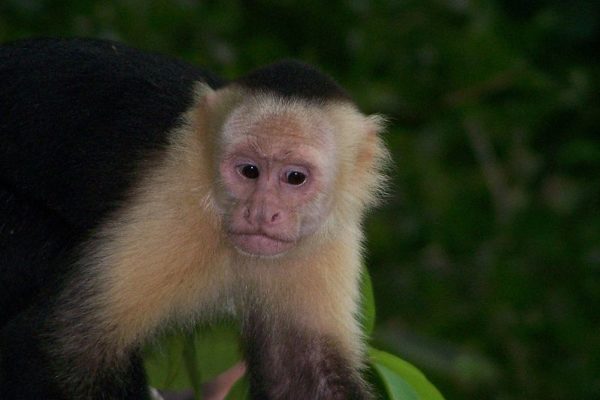 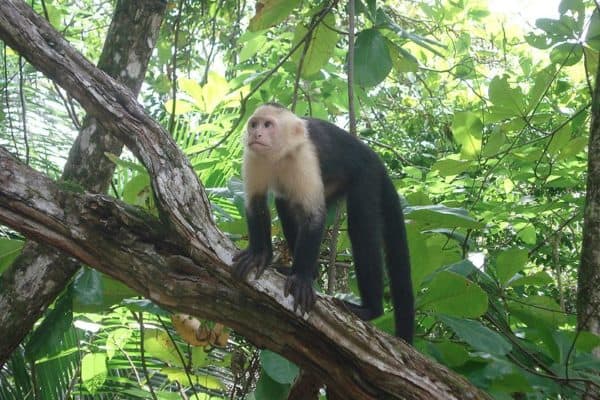 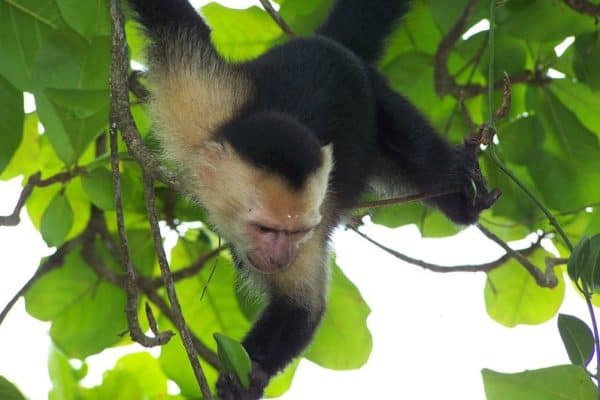 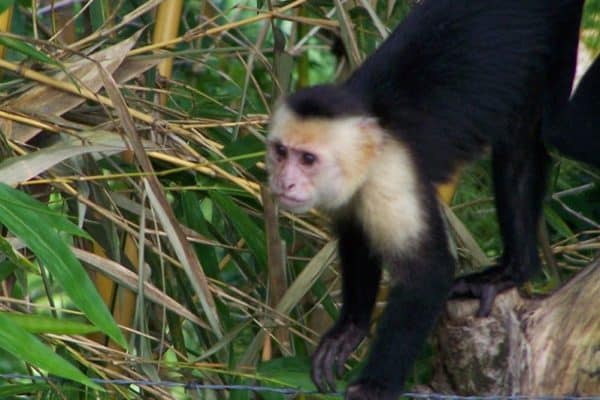 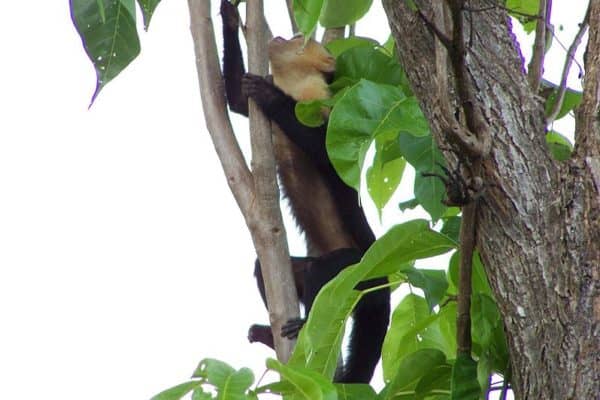 The white-faced capuchin monkey barks and coughs to alert other monkeys of a predator in the area.

White-faced capuchins live in social groups of 18 to 20 monkeys. They are omnivores and live to be around 30 years old in the wild. These monkeys make their homes in tropical evergreen and dry deciduous forests where the canopies, or tops of the trees, grow very close together. They live in Central America, specifically Honduras, Costa Rica, Panama, and Nicaragua. They're also found in South America, mainly in Colombia and Ecuador.

White-faced capuchins are also known as Panamanian white-headed capuchins and sometimes white-throated capuchins. Their scientific name is Cebus capucinus. These monkeys belong to the Cebidae family and are in the Mammalia class.

The white-faced capuchin monkey got its name from the Capuchin friars in Italy. These friars wore a head covering, or cowl, that looked a lot like the black fur cap on the head of this capuchin monkey.

These monkeys have black fur on their back and legs and white fur on their chest and face. The white-faced capuchins are known for the cap of black fur on their head. Adult males can weigh up to eight pounds while females weigh about five pounds. These monkeys grow to be from 15 to 17 inches in length, not including its tail which is about the same length as its body. For reference, an eight-pound white-faced capuchin weighs about the same as a gallon of milk. And a monkey that measures 17 inches long is a little bit longer than a bowling pin.

These monkeys have what’s known as a prehensile tail. This means that the monkey can grab tree branches and other objects using its tail. It’s almost like an extra hand! This tail helps them to hang on to tree limbs and branches as they move through the treetops. Staying up on high branches helps them to avoid predators.

Panamanian white-headed capuchins can move very quickly between the branches of the trees in their habitat. The fastest recorded speed of these monkeys is 34 mph.

White-faced capuchins use their voices as a way to stay safe from predators. They have a special chirping/barking sound they make to alert other monkeys in the area of a predator. This gives the monkeys a chance to go higher up in the trees or escape the area.

White-faced capuchin monkeys live in Central and South America, specifically in the tropical forests of Ecuador, Panama, and Colombia. Troops of monkeys live high in the canopies of trees where they can find food, hide from predators, and communicate with others in their group.

They need a climate with a high level of humidity to survive. If you ever see a photo of a white-faced capuchin monkey sticking its tongue out; it’s not being rude. This monkey sticks its tongue out to allow moisture to evaporate helping them to stay cool during an especially dry season.

What does a Panamanian white-faced capuchin eat? These monkeys are omnivores, so they eat both meat and plants. They eat nuts and fruits such as figs and mangoes. Leaves, insects, lizards, and birds are also on the menu. In addition, they sometimes eat tree rats such as the Speckled spiny tree-rat.

Scientists have observed that these white-headed monkeys are willing to try to eat a variety of foods - even an unfamiliar fruit or an insect they’ve never seen before. In short, these monkeys will try to eat anything they find in their habitat.

Like most smaller animals, the white-faced capuchin monkey has several predators. They are hunted by snakes, such as the tree boa constrictor and lancehead snake. Other predators include eagles, jaguars, caiman, and ocelots.

As you see, most of these animals have easy access to the trees where this monkey lives. An eagle may swoop down to attack a white-faced capuchin, or a jaguar may follow one up a tree to capture and eat it. A monkey may climb down from a tree to get a cool drink at a watering hole only to be captured by a caiman.

Though this monkey’s first defense against a predator is to run away, there are times when all of the members of a troop will gather together to try to fight off an intruding predator.

White-faced capuchin monkeys are also threatened by habitat loss through deforestation. Plus, they are sometimes hunted by humans who want to capture them to sell as exotic pets. However, the conservation status of this monkey is Least Concern. Though their population is generally stable, efforts are being made to increase it. Wildlife conservation groups and zoos breed white-faced capuchins to increase their number.

Male and female white-faced capuchin monkeys have different partners every breeding season (January to April). When the females are ready to mate, they make specific chirping sounds for males to hear. A female white-faced capuchin is pregnant for about 160 days and has just one baby. She gives live birth to a baby that weighs just a few ounces and the mother capuchin cares for the baby.

A baby monkey is called an infant and can see from birth. An infant monkey nurses from its mother for two to four months and ides on its mother’s back for about the first six weeks of life. After it reaches four months old, the infant monkey learns how to find its own insects, fruit, nuts, and other food. It’s cared for and taught not only by its mother, but the other monkeys in the troop as well. It takes this monkey at least four years to become fully independent.

As these monkeys grow older, they are more vulnerable to intestinal parasites that can cause terrible sickness or death.

At last count in 2007, there are estimated to be around 54,000 white-faced capuchin monkeys in existence. Its conservation status is Least Concern.

However,  the population of this animal is decreasing due to deforestation and other threats, so breeding programs are in place at various zoos and wildlife preserves to boost the population.

View all 29 animals that start with W

What do white-faced capuchin monkeys eat?

These monkeys are omnivores that eat insects, fruits, nuts, small birds, lizards, squirrels, and tree rats. They eat what they can find the most of in their habitat. For example, if there are a lot of mangoes growing in the trees around them, that’s what they will eat.

Is the white-faced capuchin monkey endangered?

Though the population of the white-faced capuchin is decreasing, it’s not on the official list of endangered animals. Its status is currently Least Concern.But this animal plays an important role in our ecosystem. When these monkeys eat fruit, their poop deposits seeds on the ground which eventually leads to the growth of new trees. These trees can replace ones that have been cut down or lost due to deforestation.

White-faced capuchin monkeys can be dangerous. It may seem like a fun idea to have one of them as a pet, but these monkeys are still wild animals. When they feel threatened, they can lash out using their teeth and claws to fight. Female white-faced capuchins can become especially dangerous when something threatens their infant. Plus, male white-faced capuchins can fight with one another over territory or females in a troop.In addition, these monkeys can carry diseases like malaria that they can transmit to humans through a bite.

No, this animal would not be a good pet. White-faced capuchins are wild animals and should remain so. Though these monkeys are small, they can be very unpredictable. They can easily become frightened causing injury to the person who takes care of them even if the person didn’t mean to frighten them.Instead of keeping one as a pet, you can read about them and watch nature documentaries to learn more facts. These monkeys are best left in the wild where they can be free to happily wander the treetops with members of their troop! They don’t belong in domestic situations.