While they may look exceedingly similar upon first glance, there are a number of differences between llamas vs alpacas. While these animals may share similarities in body shape, both have feet instead of hooves, and both are species of South American camelids, llamas and alpacas are actually two very different animals.

In this article, we will compare and contrast everything you need to know about llamas and alpacas so you can fully understand the differences between them. We will address their appearances and their temperaments, as well as the purpose of both of these unique creatures. Let’s get started and learn all about these herd animals now!

Key Differences Between Llamas vs Alpacas

Let’s discuss all of these differences and more in detail now.

One of the main differences between the alpaca and the llama has to be their sizes. The llama is much larger than the alpaca, in both height and weight. You could easily tell the difference between these two animals if they were standing side by side. But just how much bigger is a llama compared to an alpaca? Let’s take a closer look at the figures now.

On average, llamas reach anywhere from 40 to 50 inches tall, while alpacas only reach 30 to 35 inches tall. In addition, alpacas only weigh 120-145 pounds, while llamas weigh anywhere from 175-250 pounds. This is an important distinction to make, especially if you are hoping to keep either one of these fantastic animals on your home farm!

While they may look particularly similar upon first glance, there are a number of physical differences between an alpaca and a llama. For example, llamas have much larger ears compared to the ears of the average alpaca. In addition, the alpaca has a much more petite nose and face compared to the elongated nose of the llama.

Llamas vs Alpacas: Purpose and History

In addition to their physical differences, there are a number of differences in both the purpose and the history behind the llama and alpaca. For example, the llama is a notorious pack animal, capable of carrying gear up to 20 miles per day, while the alpaca is renowned for its wool and fur.

Guard llamas have an instinctive awareness of their surroundings, and even patrol their area for threats, including predators like foxes, coyotes and dogs. When a predator approaches, a guard llama will typically watch it intently, posture, make shrill noises to try and scare it off, and even attempt to chase the animal away.

The temperaments and behaviors of both llamas and alpacas are extremely similar to one another. However, llamas tend to be more aggressive compared to the average alpaca, though both of these animals will spit if they feel threatened. In addition, alpacas enjoy living in a happy herd, while llamas do as well, but not to the same extent as alpacas.

Depending on the health and care of the individual animal, llamas live an average of 20 to 25 years, while alpacas live an average of 15 to 20 years. However, this is the average that both of these creatures live when found in the wild, and many domesticated llamas and alpacas live longer than this. This is especially true if they are kept in a happy herd, and given a well-balanced diet alongside plenty of affection and care!

Is a llama the same thing as an alpaca?

No. Although they are very similar, they are not the same animal. The scientific name for the llama is the llama glama, and the alpaca is the Vicugna pacos.

What's the difference between a llama and an alpaca?

Llamas are larger and more solitary. Alpacas have better wool and like to stick together.

Are llamas or alpacas nicer?

Generally speaking, alpacas tend to have a gentler disposition, but either will spit when provoked or threatened.

Are llamas or alpacas more aggressive?

Llamas are often more aggressive because they are very protective of other animals.

Do alpacas and llamas have different feet?

Not really, no. Both llamas and alpacas have two-toed feet with soft pads on the bottom, rather than split hooves like goats or many ungulates. 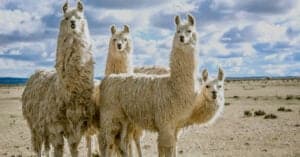