Nurlan Miramov/Shutterstock.com
Share this post on:
More Great Content:
A Gigantic Grizzly Casually Sits Next To…
How Deep is the Ohio River?
The 7 Most Aggressive Sharks in the…
The Largest Bald Eagle Nest Ever Found
Are There Sharks in the Mississippi River?
The 4 Most Dangerous Spiders in Texas…

Different fish species have varied diets that leads to their diverse dental structure. The shape and amount of teeth a fish has depends on what they eat. Sharks, for instance, are carnivores that require piercing-sharp teeth. On the other hand, the drum fish feeds on hard-shelled bivalves and crustaceans, where rugged, shell-crushing teeth are necessary. So it isn’t surprising that a predatory fish that eats amphibians, small mammals like shrews, red squirrels, and other invertebrates has a unique set of teeth. Pike fish teeth are a combination of needle-like teeth and fangs. This helps them capture their prey faster and better.

Known as the freshwater barracuda for their elongated bodies that range between 20 inches to 71 inches, pike fish are freshwater apex predators with incredible, yet fearsome teeth. These freshwater hunters are also notoriously aggressive. As an apex predator, pike fish swims at the top of its ecosystem‘s food chain with very few threats and natural predators. Once these freshwater predators open their mouths, it is a terrifying image, but pike fish teeth are fascinating as they are frightening.

Do Pike Fish Have Teeth?

Pike fish are known for their unique set of sharp teeth. As carnivorous hunters, they have an impressive collection of sharp teeth that can easily pierce through their victim’s flesh. Most of their teeth are needle-like, while some are bigger and more like fangs, lining the upper and lower jawline. All pike fish teeth are razor-sharp and point inward, so there is no chance of escape for their prey. Pike fish generally don’t bite humans, but they can injure a human’s hand when being handled.

Pike fish are not very picky when it comes to prey. They can eat a wide range of animals from fish, insects, frogs, small mammals, birds, ducks, or even other pikes. With this diet comes a great set of solid and razor-sharp teeth. They are vicious predators, thanks to their long bodies, aggressive hunting nature, and most importantly, their group of pin-sharp teeth for catching, snatching, piercing, and ripping their victim’s flesh apart. They have numerous rows of razor-sharp teeth lining their jaws and mouths’ roofs to guarantee a tight grip on their prey.

How Many Teeth Do Pike Fish Have?

Adding up all the small and large teeth inside their mouth, an adult pike fish can have between 300 to 700 sharp teeth, which is both amazing and terrifying! In the front portion of their mouth, pike fish teeth are smaller than those on the side, appearing like sharp pins. The side jaws sport a few large, fang-like teeth noticeable when a pike fish’s mouth is agape. The smaller, needle-like teeth are more numerous and are slightly angled inward to create a tighter grip on the fish’s prey.

There are two parallel pads of tiny, needle-like teeth on the roof of the pike’s mouth. These are slanted inward, thereby preventing any prey from fleeing. So any animal caught by a pike fish will have a hard time getting away unless the fish itself loosens its grip.

Most of the pike fish’s teeth, especially the tiny, needle-like teeth, are attached to the pads on the roof of their mouths, making up around 90% of their total dentition. These small pin-sharp teeth also give way for the fangs to be more noticeable.

Do Pike Fish Have Strong Jaws?

With long bodies and large heads, a pike fish’s jaws are indeed hard to beat. The pike fish’s bite is quite strong, as they often bite with enormous pressure. The largest pike fish discovered, a Northern pike nearly 32 inches long, generated a bite force of 44 Newtons. This isn’t enough to sever a finger but is strong enough to kill its prey and adversaries.

The pike fish’s ability to open its powerful jaws extremely wide, along with its sharp needle-like and fang-like teeth, makes the predator a highly-evolved freshwater hunter.

How Big Are Pike Fish Teeth?

Depending on the pike fish size, their teeth can grow as long as an inch. This applies to the fang-like tooth in the side of their jaws. On the other hand, the smaller teeth can grow up to 0.4 inches. They may seem short, but they are pointy and incredibly sharp, not to mention numerous. With their pressured bite and about 700 pointy teeth, there is no doubt that they rule their habitat.

What Do Pike Fish Use Their Teeth For?

Pike fish do not only have razor-sharp teeth; they also possess hundreds of them, lining the jaws and the roof of their mouth. This dental structure has one goal: to catch and snatch prey quickly while keeping it from escaping. Since they do not have molars to chew their prey, pike fish cut and tear their flesh apart into smaller pieces for easier swallowing.

Pike fish can also use their sharp teeth to drown their prey before eating, especially for victims from the water surface like small mammals and frogs.

Pike fish usually stay away from humans as they do not hunt prey beyond half their size. However, pike fish can attack in self-defense, especially when caught by fishers. Like barracudas, light also attracts pike fish, so wearing something shiny that can reflect light may be a bad idea when swimming or wading in rivers or lakes. 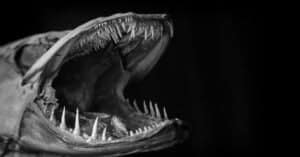