Smartest Pets in the World

We all love our pets. However, these cute creatures aren’t always the most intelligent. Like all animals, the level of intelligence of different pets tends to vary from one individual to the other. While some animals make really smart pets, others don’t do so well on the intelligence scale. The smartest pets are easy to train; some can take initiative on their own, solving challenges and doing some really cool stuff. Of course, there are different ways to define intelligence. Join us as we discover some of the smartest pets in the world.

Rats are pretty smart animals. Like humans, they exhibit complex facial expressions and different responses to stimuli. Their brain structure and minds, although underdeveloped, function somewhat similarly to that of humans as well. It’s no wonder scientists use them for laboratory experiments. Rats can be charming too. They are social animals that love to be tickled, scratched, and played with. These little creatures also tend to show complex emotions. For instance, they may show symptoms of depression when isolated. This shows just how advanced these tiny critters can be.

A pigeon’s memory is one of their most remarkable traits. Experts think they can be trained to identify all the letters of the alphabet. They can also recognize specific locations and people over a certain period. Pigeons may also be able to recognize different people in pictures. Their intriguing memory is probably why ancient people used them to deliver messages. Pigeons display a level of self-awareness. They can recognize their own reflection in a mirror which is a really cool trait for an animal.

It might not look like it, but squirrels are among the smartest animals in the world. They’re fast learners, and this makes them very adaptable. Although their natural habitats are in the wild, many of them can adapt to the busy city life and survive really well. They are cunning creatures and often develop an incredible ability to steal food to survive.

Whether in the wild or as pets, squirrels bury food when it is abundant and dig it up later. Sometimes, they pretend to bury their food to deceive other animals that might be watching them. Research has shown that gray squirrels have a higher EQ than their red counterparts and that tree squirrels are more intelligent than ground squirrels.

Dogs are known as man’s best friends. They are great companions and can master basic house rules quickly. For several thousand years, man has forged an impressive partnership with these famous canines using them as guide dogs, for security reasons, and even as nanny dogs. Some dog breeds are generally more intelligent than others. The collie, for instance, is one of the most famous breeds known for its herding abilities. It can understand and respond appropriately to many hand signals. Observations have shown that this dog breed understands more human words than other dog breeds – easily making them one of the smartest pets in the world.

This is one animal you’re probably surprised made it to this list. Interestingly, pigs are among the most clever animals. In fact, experts think they might be more intelligent than dogs. Pigs grasp concepts that take many months for a human child to learn. They can recognize humans and other pigs, thanks to their long-term memory. They can also influence other pigs. Pigs have several different sounds they use to communicate with one another. They show responses to emotion sometimes as far as empathy, which is rare for animals.

There are lots of similarities between humans and chimpanzees. Genetically, man shares 98% of his DNA with chimpanzees, so naturally, they’re among the most intelligent animals. Chimps can make tools and make use of them in various ways. They can improvise tools from the available items around them to meet a need. They can identify objects and colors. In addition, they can communicate with people with sign language. Due to their high intelligence, chimps can throw tantrums and become very destructive when disciplinary actions are taken.

These water-dwelling cephalopods are more clever than many people can even imagine. They might seem uninteresting initially, but a closer look at their behavior shows just how intelligent these creatures are. Octopuses can mimic rocks in order to stay undetected by predators and prey. They have also mastered the ability to swim in unison with the water speed. This creates a false impression that they are still in the same spot while they are on the move in reality. Octopuses are masters of escape, opening screw-on lids, throwing rocks, and intentionally splashing water on items outside their tanks just to get out of captivity.

The bottlenose dolphin has the largest brain among all other dolphins. They are also the only ones with unfused cervical vertebrae, which is why they can nod their heads like humans.

But this is not the only human-like trait they exhibit. Bottlenose dolphins have a great memory. Even after 20 years of separation, dolphins remember the calls from their mates. They are easy to train, can recognize themselves in mirrors, and identify images on TV. Bottlenose dolphins also have an impressive vocabulary. They have been observed to have a specific language to communicate with other members of their own species and can switch to the common dolphin language when they come in contact with other dolphin species. The EQ of a bottlenose dolphin is 5.3.

The African gray parrot is one of the smartest birds in the world. This intelligent bird breed is natively found in the central African rainforests. It can recognize objects, perceive quantities, and differentiate colors. In a study conducted by a group at Harvard, an African gray parrot was found to be smarter than an average 4-year-old human child in some respects. Not only can this breed mimic human language, but they can also master and understand a range of vocabulary that may include hundreds of words.

Various pets display varying intelligence levels, from using tools to showing complex emotions. If you’re looking to own a pet that can learn party tricks and impress visitors, the most intelligent pets in this post are some of the best to consider. Generally, the characteristics shared by the smartest pets include self-awareness, problem-solving, and language comprehension, among other things. 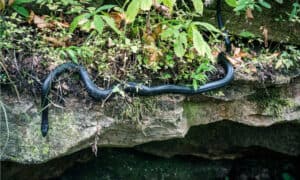