They can find their way back to their nests from up to 1300 miles away. 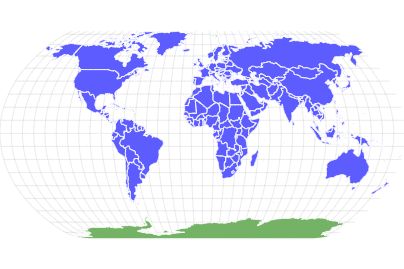 View all of our Pigeon pictures in the gallery.

View all of the Pigeon images!

Pigeons are very widely distributed, with over 250 species worldwide.

Pigeons are part of the family Columbidae. Scientifically, they are the same as doves, though doves normally refer to smaller species of pigeon in layman’s terms.

You can read more incredible facts about pigeons.

Where To Find Pigeons

Pigeons are birds that are found everywhere, save for Antarctic ice and the Sahara Desert. They inhabit a wide variety of biomes, including grasslands, forests, and cities. The most widely distributed species is the rock dove, otherwise known as the common pigeon. This species is feral in cities around the world.

The family Columbidae comes from the Old Irish word for dove, which is Columb. St. Columba of Iona, or the “dove of the church,” may be the influence for the name of this family.

Depending on the species, pigeons are birds that come in a wide variety of colors, shapes, and sizes. They can be as small as 6 inches to over 2 feet long. The crowned pigeon is the largest of the species and is about the size of a turkey.

The pigeon’s flight muscles make them a bulky bird, and they have a small beak with two fleshy cere near the face. They have a ring of skin around their eyes. They have short beaks, short legs, and tiny heads on a long neck. They come in in an incredible variety of colors and patterns.

Many of these birds have crests and iridescence on their bodies, and some domestic varieties, such as the white ice pigeon, have feathers on their feet. Many colorful forms of domestic species are descended from the humble gray rock pigeon.

Scientifically speaking, pigeons and doves are interchangeable. Linguistically, smaller members of the Columbidae family tend to be known as doves, while larger members are called pigeons. However, this is not a hard rule and there are exceptions, as well as birds that are called both of these terms. For example, the species Columba livia is known as both the rock dove, the rock, and the common pigeon.

Depending on the species, these birds can either live solitarily or form large social groups. Most species roost at night. They spend most of their day preening and sunning themselves. They also bathe in water or dust.

These birds have been used extensively in history as navigators, as they have an excellent sense of place and can travel very easily.

During the breeding season, most species become territorial and defend their nests.

These birds eat berries, nuts, seeds, and fruits. They may also consume insects and other invertebrates. In populated areas, feral birds will scavenge for food scraps.

Young birds consume a product called “pigeon milk,” which is produced by their parents. This is regurgitated food that comes out in a liquid form.

They are one of the very few bird species with the ability to suck water through their beaks. For a complete list of foods pigeons eat, check out our “What Do Pigeons Eat?” page.

Snakes and birds of prey are these bird’s most abundant predators. Because they are an easy target, they have developed methods, such as flocking in large groups and having a short nesting cycle, to avoid being preyed upon.

These birds are monogamous. Males perform elaborate displays in order to attract the attention of females. The birds build flimsy nests at the top of trees or along rocky cliffs. Both parents care for the eggs and baby pigeons.

Females may lay up to 5 nests during the breeding season. Most nests consist of 2 eggs, though may have either 1 or 3 depending on the abundance of available food. Because they are fed nutritious pigeon milk, they grow rapidly. Some species are fed this until they leave the nest, while others will switch to solid foods.

As a family, these birds are extremely abundant. There are over 400 million birds worldwide.

However, some species are endangered, critically endangered, or even extinct. According to the IUCN Red List 2012, 30% of species are threatened or near-threatened. The best way to preserve endangered species is to protect their habitats from habitat destruction.

However, due to the introduction by humans, some species have drastically expanded their population sizes.

Pigeons do not migrate. However, if they are displaced from their homes, they can fly up to 1300 miles to return.

How many eggs does a pigeon lay?

Pigeons will lay one to three eggs per clutch. Typically, the female pigeon will lay two eggs. More eggs can be laid before the first clutch leaves the nest.

How fast does a pigeon fly?

Pigeons can fly up to 93 mph. This speed, paired with their ability to recall their previous locations, made them the perfect candidate to carry messages for humans for many years.

What is a pigeon’s wingspan?

A pigeon’s wingspan averages around 19.7-26.4 inches, though this can vary depending on the breed of pigeon.

When do pigeons leave the nest?

What do you feed a baby pigeon?

Baby pigeons are fed what’s known as ‘pigeon milk’. Pigeon milk is a liquid-like substance that consists of regurgitated food from the male or female parent.

Pigeons are actually very clean birds. There has been little evidence found that supports the belief that pigeons are significant transmitters of diseases.

Is it dangerous to touch a pigeon?

Pigeons themselves are not dangerous to touch, though they are a wild animal, so it is not recommended. However, their poop can transmit certain diseases when touched, so while pigeons aren’t dangerous, their poop certainly should not be touched.

Are pigeons good to eat?

This depends on the type of pigeon. There are some types of pigeons, such as squab, that are very tasty when prepared properly. These pigeons are bred specifically for their meat and are more common in French, Chinese, and Moroccan cuisine.

Pet pigeons have great affection for their owners. They bond easily with the humans that care for them and can be very loyal companions. Some species, like the ice pigeon and the American show racer, are considered domestic breeds.

What is the estimated population size of Pigeons?

There are 400 million Pigeons worldwide.

What are some distinguishing features of the Pigeon?

The Pigeon has a white rump, and males have a metallic purple/ green iridescence.

What is another name for the Pigeon?

The Pigeon is also called the common pigeon or the rock dove.

What is an interesting fact about the Pigeon?

Pigeons can find their way back to their nests from up to 1,300 miles away.

What are the differences between a pigeon and a mourning dove?

The differences between a pigeon and a mourning dove lie in their size, speed, appearance, predators, and diet. 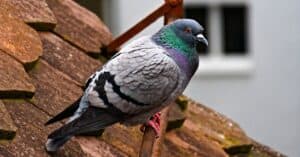 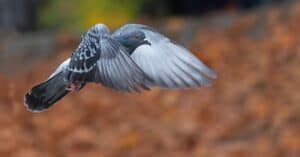 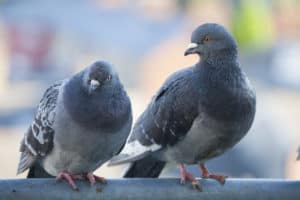