Pet snakes are growing in popularity around the world! They are low maintenance, fun to handle, and one of the most unique and expressive pets you can get. Picking the kind of snake you want is one thing, but the next big step? Naming it! Here are some incredible names for your snake, specifically written for anyone getting a new pet OR for anyone who happens to temporarily find one in their yard this year. Let’s get started.

Naming your pet snake is just as important as picking the right kind of snake. There are a few things to think about when considering your snake’s name. Here are the categories we have split our names into:

Take a look through our list and see which one best fits your new, slithery friend.

20+ Incredible Names For Your Pet Snake

We have broken this name down by category. Take a look at the options below!

Pink snakes are rare, but they exist out there. One of the most notable is the rosy boa from southwest America. Pinky is also a great name for a snake that loves to wrap itself around your finger, too. If your snake is extra snuggly or pink (or both!), Pinky is a great option.

Black is one of the most common colors that snakes come in. If your reptilian friend is exceptionally dark and glossy, Ebony could be a solid option. Ebony is a material that is well-known for its beautiful black sheen, a feature that many snakes share. If Ebony isn’t doing it for you, Obsidian might be a great secondary option.

Hopefully you like this name because of the copper color your snake has, not because it’s a copperhead (a highly venomous snake). Copper is a name for a snake that is energetic, bright, and has beautiful brown colorations across its body.

There are a LOT of potential species, but we are only going to cover a few of the most common. Here is a quick bulleted list.

Some snakes are going to get really large. Some boa constrictors and pythons, for example, can grow to an incredible 18 feet long. If you know that your pet snake is going to be a big boy (or girl), it might be worth it to give them a deserving name! Even more, when they are little and don’t match their name, it can be especially cute.

These names may be generic, but there is a reason for it! A classic name for a classic snake; can anyone blame you? Here are a few classic names for snakes that you may or may not have heard of, but they will fit almost any snake, regardless of species or color.

Snakes slither, simple as that! There is just something about the way that “Slither” rolls of the tongue that makes you feel like it’s perfect for a snake. Since all snakes slither, this one will fit any reptilian friend of yours.

Similar to Slither, just with a different twist. Snake names that start with an “s” seem to work in almost every situation.

Most species of snake have the ability to hiss, even if they don’t do it often. Still abiding by the rule that names with “s” in them seem to work, this is a classic example.

Hopefully, your pet snake doesn’t have any fangs, or you might be in some trouble! Still, even if they can’t actually hurt you, it might make them feel good to know that you respect their cousins that can.

All snakes have scales! In fact, it’s one of their defining features. Scales (or the variation, Scaley) is a solid name for anyone looking to name their snake something that brings attention to their colorations or patterns. In many species of snake, their scales can be lovely.

We saved the best for last! There are some great snakes or snake-like creatures in the world of pop culture. Here are a few of the best we could think of.

The name of your ex

Want to be forever reminded that your ex is a snake? Literally, name your snake after them. Revenge never tasted ssssoooo sweet.

The Greek classic. Medusa is a mythical creature who turns people who look at her into stone. One of her defining features? Her hair is completely made out of snakes.

All the Harry Potter fans should know this one! These three names represent someone in the Harry Potter world that is close to a snake or has a name fitting for a snake. Nagini is the snake that is always with Voldemort, Slytherin is the name for a great wizard with Parseltongue (he can speak to snakes), and Severus is Snape’s first name.

The villain from Alladin is famous for turning into a snake and carrying his famous snake staff wherever he goes.

The snake that tries to eat Mowgli in The Jungle Book is named Kaa! He’s a python and has a short, simple name that any snake would be happy to have. 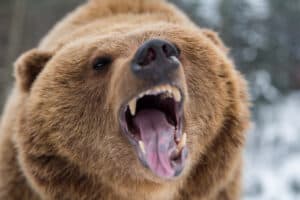 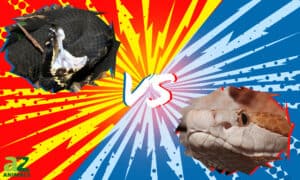 Cottonmouth vs Copperhead: What’s the Difference? 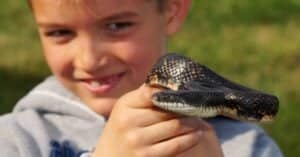 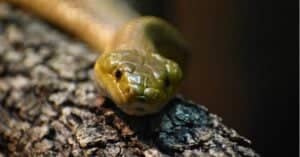 8 Fastest Snakes in the World