Can grow to nearly 2 meters in length! Click through all of our Moray Eel images in the gallery. 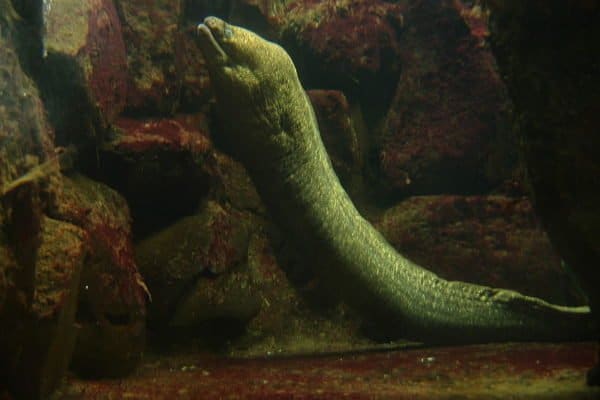 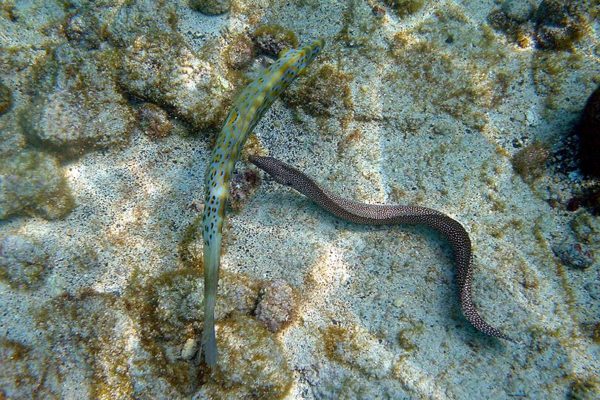 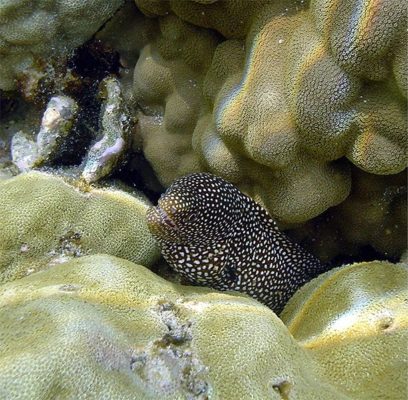 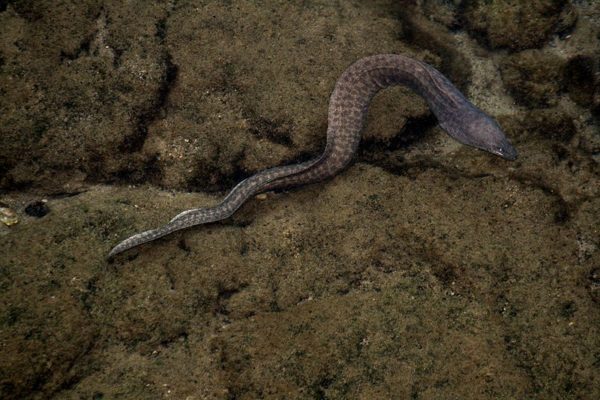 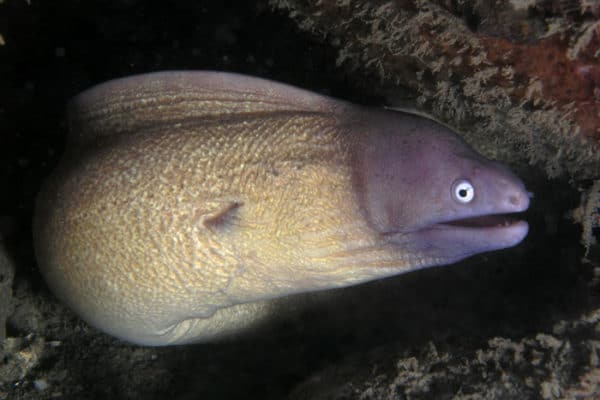 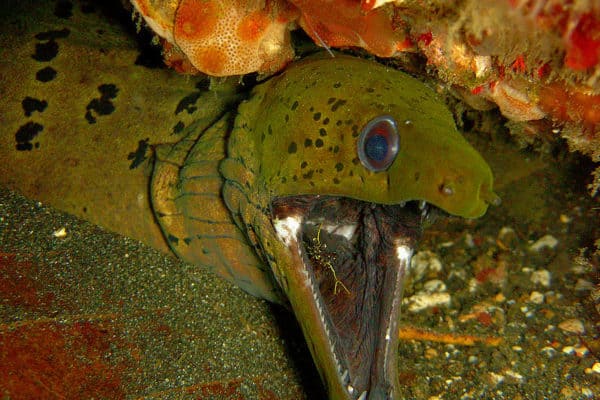 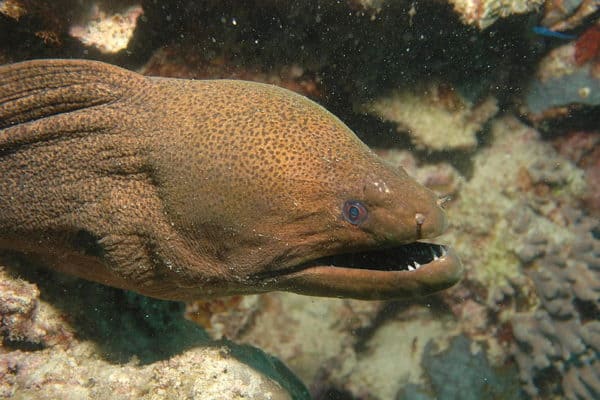 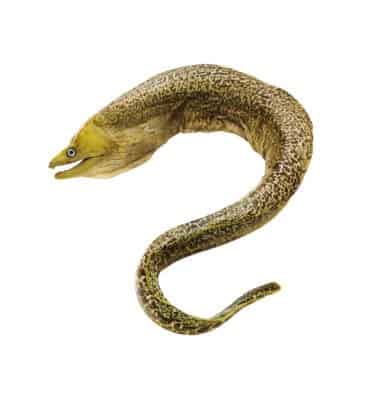 View all of the Moray Eel images!

Moray eels live in oceans throughout the world.

Most moray eels live in saltwater while a few live in freshwater. These fish have double jaws featuring a collection of sharp teeth. There are 220 species in this family of creatures.

• Razor teeth: The moray eel is a fish that has two jaws filled with very sharp teeth. The bite of this fish can pierce the skin of a human.
• Excellent smell: These eels have small eyes along with poor vision. Fortunately, they have an excellent sense of smell which helps them to find prey in the dark ocean waters at night.
• Baring its teeth: Moray eels are fish that are thought of as aggressive because they seem to be baring their teeth at all times. But this fish must keep its mouth partially open so it can breathe.

The scientific name for the moray eel is Muraena retifera. It is sometimes called a reticulate moray. The word moray derives from the Greek word muraina, which means a type of eel.

It belongs to the Muraenidae family and the class Osteichthyes.

There are 220 species that fall within 16 genera. These genera are divided into 2 subfamilies called Muraeninae and Uropterygiinae.

There are 220 species of eel belonging to the Muraenidae family. The majority of these species live in saltwater. Some of the most notable examples include:

• Giant moray eel: This is the largest of the species. They grow to be about 10 feet long and weigh around 66lbs. They can be found living in coral reefs in the Indo-Pacific Ocean region.
• Green moray eel: Despite its name, its skin is brown. This eel has mucus all over its body that prevents parasites from latching on. The mucus makes its skin appear green. These fish live in the western Atlantic region.
• Mediterranean moray: This fish is also known as the Roman moray. Its range includes the Mediterranean Sea and the eastern Atlantic Ocean.
• Honeycomb moray eel: It’s sometimes called the leopard eel because of the pattern of black spots on its skin. It lives in the Indo-Pacific Ocean region and is one of the eels living on the Great Barrier Reef.

The color of this creature depends on its species. Some have smooth skin that’s brown or gray. Others are colorful like the green moray eel or the ribbon eel. Blue, white, and orange are other colors seen on this species of fish.

A moray eel can measure from 1 to 13 feet in length depending on its species. The smallest size is the dwarf, which makes its home off the coast of Hawaii. It grows to be just 1 foot long. The longest species is the slender moray eel at 13 feet long.

There’s a wide weight range for this family of fish. For instance, the Hawaiian dwarf weighs just a few ounces whereas the heaviest species, the Giant, weighs 66 pounds.

A giant Conger eel is the largest ever caught by fisherman. It measured 21 feet and weighed 131 pounds!

This creature’s teeth are one of its most effective defensive features. Many of the larger species can cause great injury with their bite. The poison contained in an eel’s skin is another defensive feature.

Predators include barracudas, sea snakes, sharks, and groupers. They are also caught in fishing nets either on purpose or accidentally.

The conservation status is Least Concern. However, these fish are threatened by increased water pollution. Also, these eels are captured and eaten in some countries including Germany, Poland, Sweden, and Denmark.

Reproduction takes place in January and February. These creatures achieve sexual maturity at 2.5 years old. A female releases around 10,000 eggs and they are fertilized by a male’s sperm. So, reproduction happens outside a female’s womb. When the eggs hatch, the larvae float along in the open ocean. After a year of growth, the larvae are strong enough to swim into the depths of the ocean to hide.

The lifespan of a moray eel ranges from 10 to 40 years.

Moray Eel in Fishing and Cooking

There is a risk in eating moray eel. It can cause ciguatera poisoning. They carry this poison in their skin and it’s possible that it remains in the fish even after it’s cooked. A person who ingests this poison becomes very ill. But, despite the risk of ciguatera poisoning, this fish is a delicacy in some countries including Germany, Poland, Sweden, and Denmark.

The number of moray eels caught each year is unknown.

Where are moray eels found?

Moray eels are found in temperate and tropical oceans throughout the world. Most of the species in the moray eel family live in saltwater while a few live in freshwater.

Many species of moray eel live in coral reefs such as the Great Barrier Reef. They also live in underwater caves and rock crevices.

What do moray eels eat?

How big can the green moray eel get?

A green moray eel can grow to a little over 8 feet long.

Can a moray eel kill you?

It’s a possibility. If a person received a deep bite from a large moray eel and didn’t receive medical attention for the bleeding, then there would be a risk of death.

Maybe, maybe not. These fish are shy creatures that hide most of the time. Many people think of them as ferocious animals because their sharp teeth are always on display. But a moray eel must keep its mouth partially open in order to breathe.

What Kingdom do Moray Eels belong to?

What class do Moray Eels belong to?

What phylum to Moray Eels belong to?

What family do Moray Eels belong to?

What order do Moray Eels belong to?

What type of covering do Moray Eels have?

Moray Eels are covered in Scales.

What are some predators of Moray Eels?

Predators of Moray Eels include sharks, humans, and barracudas.

How many eggs do Moray Eels lay?

What is an interesting fact about Moray Eels?

Moray Eels can grow to nearly 2 meters in length!

What is the scientific name for the Moray Eel?

The scientific name for the Moray Eel is Muraenidae.

What is the lifespan of a Moray Eel?

What is the lifespan of a Moray Eel?

What is the optimal pH for a Moray Eel?