When we think of the alligator’s menacing grin, that wide snout, and all those teeth, one state seems to come to mind: Florida. But what of other states? Are there alligators in Texas? Yes, there are.

These fearsome carnivores hold sway in the southeastern region of North America. Which means they can be found in Alabama, Arkansas, the Carolinas, Georgia, Louisiana, Mississippi, and even part of Oklahoma.
Alligators can also be found in eastern Texas.

Since they are rather fond of lakes, rivers, and swamps, we shall be taking a look at four lakes that these outsize predators consider prime real estate. In other words, four of the most alligator-infested lakes in Texas.

But first of all, we’ll start off by examining just how many of these reptiles call the Lone Star state home.

How Many Alligators Live in Texas?

The Texas Parks and Wildlife Department estimates that about 400,000 to 500,000 alligators live within the state. For perspective, the least populated state (Wyoming) has a population of 578,758. That’s about the same as the estimated alligator population of Texas!

Yet, Texas is one of the most heavily populated states and has a population of about 29 million people. That means that there is 1 alligator for every 60 or so people.

While Texas has a large alligator population, it’s important to note they’re not found throughout the entire state. Rather, they’re most commonly found in wetlands that are in counties closer to Louisiana or along the Gulf coast.

Alligators are generally rare in Dallas (although, we’ll detail a couple of North Texas lakes with alligators in our list below), Austin, and San Antonio. You can see on the map below that alligators are found only in Texas’ eastern half.

With that out of the way, let’s look at four lakes you should be aware of if you’re looking for alligators in Texas.

Lake Lewisville, or Lewisville Lake, as many would have known it, is one of the largest lakes in the north of Texas. This lake is best known for its excellent recreational activities and opportunities, such as swimming, jet-skiing, sailboarding, camping, picnicking, biking, etc.

While driving along its I-35 W access route, you might encounter mammals such as deer, mink, turkeys, and others, such as amphibians, reptiles, birds, and other invertebrates.

While on the road to the lake, you might have the possibility of spotting a huge alligator crossing the road, whether you expected to see it or not. What’s more, there are also a few alligators and known populations of them in or around Lake Lewisville.

The most relevant sighting of all happened in 2015 when a nine-foot alligator was spotted and made the lake its new habitat. Spotting an alligator that large has caused fear among many people, and the fact that nuisance alligators can just randomly pop out of the water to approach you is scary. Nuisance alligators are those that are at least four feet long and are believed to pose a threat to anyone near the lake.

In total, Texas Parks and Wildlife has estimated that there are a “few dozen” alligators in North Texas lakes like Lake Worth (below) and Lewisville Lake. That concentration pales in comparison to the concentration of alligators in Florida or Louisiana, but it’s still notable since Dallas is on the extreme edge of the American alligator’s range.

Lake Worth is a popular destination for people who want to enjoy a vast and revitalized downtown life without spending a lot on things. This 3,489-acre lake is home to beaches, historic buildings, antique stores, shops, restaurants, art galleries, etc. You can also witness the Lake Worth Painting Festival, an open-air museum, and other cultural activities that tourists and residents are eager to experience every year if you’re lucky enough.

During your vacation here, you may encounter armadillos, foxes, coyotes, birds, and even brown rats. Aside from that, alligators are also an unexpected common sight. In 2021, locals spotted two large alligators in Lake Worth during the weekend. This has caused an alarm for many people visiting or residing near the lake.

Lake Worth’s management has also imposed safety tips and alligator emergency hotlines so people would be aware if they see one, especially when it’s a nuisance alligator. Preliminary findings and studies around the lake indicate that the alligator population within Lake Worth is between 15 and 25.

There is always a warning for alligator sightings for people trying to visit this area. Despite that, Lake Worth remains one of the most popular places for recreation, relaxation, and vacation around Texas.

Caddo Lake, known for its abundance of cypress trees, is home to vast bayous, ponds, canals, and creeks. Its area of 25,400 acres consists of a cypress swamp with a mysterious history. Yet, the lake is not vast enough for speedboats, and only a few people who live on the shores of half-flooded towns in Texas know how to navigate it.

Still, this is open for tourist activity, and there is nearby accommodation in the area. The lake is home to various wildlife, with 93 different fish species, 46 reptiles, 22 amphibians, 47 mammals, 20 mussel species, and birds such as warblers, woodpeckers, ducks, buntings, and herons.

This lake is also known for alleged Bigfoot sightings, which are still not confirmed to this day. Although the existence of a Sasquatch is not confirmed, the shores of Caddo Lake are impossible to walk on, and that is why many tourists and even nearby residents deem them to be the perfect spot for a bigfoot to live on.

There is also a place here called “Bigfoot Alley,” where four rumored bigfoots are hiding and waiting to be discovered by locals and tourists.

Other than the fictional Bigfoot, alligator sightings are also common here, and they’re not just made up by people because there have been several sightings already.

The most relevant sighting happened in 2016 when an amateur alligator hunter named Jeremy Moore caught and killed a 13-foot alligator that had been threatening to approach him and his kids during their time in Caddo Lake.

He didn’t know that his first gator hunt would be his last because large alligators like this one are mostly prohibited from being hunted down, especially when they’re not on private property. Moore immediately said that he’d try to hunt down a smaller gator by following the proper procedures the next time.

Eagle Mountain Lake is a popular fishing spot and is even a popular place for hosting fishing sports events as it is home to fish such as largemouth bass, spotted bass, channel catfish, flathead catfish, white bass, and white crappie. Besides sportfishing, this place is also an excellent spot for skiing, wakeboarding, and recreational boating.

Other than fish species, several animals such as white-tailed deer, wild turkey, raccoon, and migratory birds can easily be spotted on the sandy shores of the lake. You might stumble upon an alligator within the waters or on the shores of the lake.

The last relevant alligator sighting was dated back in 2013, but the presence of nuisance alligators always served as a warning for people trying to visit the place. There are also hotlines for alligator sightings in case there is an attack so that tourists and people who live near them can be safe from these potentially dangerous animals.

How Long Do Alligators Live For?

Once an alligator reaches about 4 feet in length, their life expectancy skyrockets because they become safe from larger predators such as birds or other alligators. While alligators won’t die due to old age, it is also understood that they do not live forever. Under proper care, they can live a very long time.

Additionally, alligators are similar to crocodiles as they do not wear down from age, they simply get bigger as time passes. Dying is usually caused by stress or being killed. 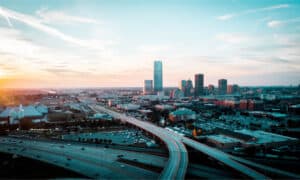 The 10 Most Snake Infested Areas in the US 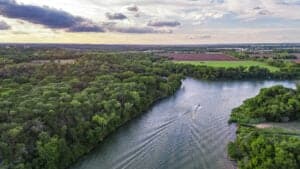 The 12 Longest Rivers in Texas 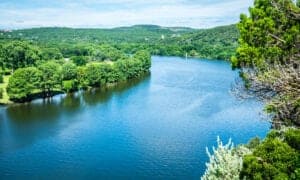 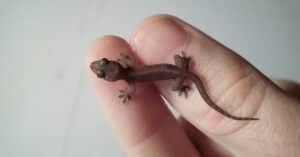