This Man-Eating Crocodile Hunted 300 People, And May Still Be Alive

Crocodiles and alligators are pretty scary creatures. The largest members of the species aren’t just able to kill large animals; they can kill and eat humans! To make matters worse, these apex reptiles are hidden predators that attack when you are least expecting it. For anyone that lives where these creatures do, taking a dip in any water comes with inherent risk. Thankfully, overall attacks are rare, but one particular crocodile has become known for his aggression. Today, we will learn about a man-eating crocodile that has hunted 300 people and may still be alive today. Let’s get started.

Gustave, the deadliest crocodile in history

Gustave is a crocodile that has reportedly killed a record 300 people and may still be alive today.

This monster crocodile is a Nile crocodile, a species known for its aggression. Gustave has quite the reputation surrounding him, and anyone that lives in his region knows of his existence. Incredibly, Gustave has roughly 300 confirmed kills along the banks of the Ruzizi River along the shores of Lake Tanganyika. This region, located within Burundi, Africa, is just south of Rwanda and to the east of the Democratic Republic of the Congo.

A result of the massive death toll associated with Gustave is a reputation of near mythical status, as well as a name that everyone knows to fear. Gustave was first named by Patrice Faye, a herpetologist who spent decades studying him, beginning in the 1990s. In fact, a PBS documentary aired in 2004, in which much of the information used comes directly from Faye’s research.

In order to hunt humans, Gustave has to be pretty big. As the photos of the croc show, he most assuredly is. Although he hasn’t officially been measured, it’s believed that he is larger than 18 feet and weighs more than 2,000. Even for Nile crocodiles, the second largest reptiles in the world (behind saltwater crocs), that is a real giant.

One of the strange things about Gustave is his age. From his size, he should technically be around 100 years old (very achievable for a crocodile). What’s strange, however, is that Gustave has most of his teeth still. A crocodile that is nearly 100 years old should have already lost most of his teeth, but Gustave still has his pearly whites. The explanation is that Gustave is unusually large for his age. Even more, this size could contribute to his disposition towards humans.

Why does Gustave attack humans?

One of the theories posed as to why Gustave has a habit of killing humans is due to his size. For his age, Gustave is incredibly large. For such a large crocodile, the dietary needs drastically change. Since his size would make hunting smaller, more agile prey like fish or zebra nearly impossible, he had to learn to hunt other things. As such, Gustave kills wildebeest, hippos, and potentially humans. Essentially, the strange genetics of Gustave may have forced him to hunt unique prey since he was much younger.

Many attempts have been made to capture and/or kill Gustave. The most famous attempt to capture him was for a PBS documentary titled Capturing the Killer Croc, where Patrice Faye operated as the lead. Using traps, bait, and all the techniques they could, Gustave was still able to outsmart the team.

Additionally, people have tried to kill the man-eating crocodile. Locals say that Gustave has three bullet wounds, and his right shoulder blade is seriously wounded. Nothing surrounding the bullets or other injuries is known, however.

In 2019, an article written in the Travel Africa Magazine reported that Gustave had been killed. No photos were provided, and no evidence was sighted in the article, making it hard to determine.

What is the deadliest species of crocodile in the world?

How often are humans killed by crocodiles?

Crocodiles are scary creatures that are capable of killing humans. When you add up all species of crocodilian (all crocodiles and alligator species), the total number of deaths each year is around 1,000. While this may seem like a lot, the odds of being killed by a crocodilian are still quite low. In fact, crocodiles are a small fraction of the total yearly car accident deaths in the United States alone (roughly 40,000 people).

Unless you plan on swimming in the Florida Everglades or any of Africa’s lakes, you should be ok. 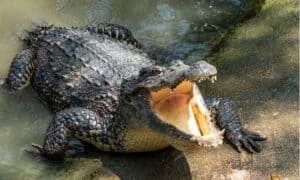