While it may not be one of the many bird-watching hotspots popular in the United States, Iowa is home to a wide variety of wildlife – including many different types of hawks. We’ve created this complete guide to help you get to know the 10 most common types of hawks in Iowa, from the red-shouldered hawk to the ferruginous hawk.

Ready to learn more about the different types of hawks in Iowa? Keep reading!

The red-shouldered hawk is one of the most common types of hawks in the United States. As a result, it’s no surprise that you can also find it in Iowa.

Red-shouldered hawks are known for their long lifespans. On average, they can live anywhere from 15 to 19 years. However, some have been found and estimated to be as old as 26! These birds of prey are considered generalists. This means they have a widely diverse diet, ranging from rodents to snakes. They also consume other prey, such as crayfish.

The red-shouldered hawk is also a speedy flier, with top speeds reaching 34 mph. For reference, many mopeds only reach speeds of up to 30 mph.

The red-shouldered hawk is not to be confused with the red-tailed hawk, another common hawk in the United States. You can identify them by their smaller size, narrower wings, and faster wingbeats. Red-shouldered hawks also have a rust-colored underside.

Cooper’s hawks are medium-sized birds of prey that are native to North America and found almost everywhere across the continent.

Cooper’s hawk is one of many hawk species found in the genus Accipiter. Birds in this group are considered true hawks because of their agility and hunting prowess. Cooper’s hawks, in particular, like to demonstrate these attributes by hunting large, difficult prey. While they typically hunt solo, they’ll occasionally partner up to catch prey together.

While Cooper’s hawks can eat up to 300 different species, you’ll find that they tend to only eat vertebrates (animals with spines). Some of their favorite prey consists of other birds, which they skillfully hunt mid-air.

If you’re not familiar with this hawk, then it may just be because of its name! Cooper’s hawk is known by a variety of different names and titles, including big blue darter, chicken hawk, flying cross, hen hawk, quail hawk, striker, and swift hawk.

The northern harrier, also called the hen harrier, is a small to medium-sized bird of prey native to North America.

Although northern harriers are found in Iowa, they can be more difficult to find in the winter. Like many other birds, as the temperatures drop, they abandon their prairies and marshes for warmer weather. This tends to be in the southernmost states of the United States, but it can also include Mexico and Central America.

One of the unique features of the northern harrier is its face. Unlike other hawks who have a distinct, sharp face shape, this hawk in Iowa has a flat face. This makes it so that it often resembles an owl. However, its face shape isn’t a coincidence; it’s actually used to help it hear better while hunting!

Northern harriers’ diet is made up almost entirely of small mammals such as rats and squirrels. However, they will occasionally venture out and hunt small birds and even amphibians, reptiles, and insects.

Red-tailed hawks are among the common birds of prey in North America. In fact, they can be found almost everywhere in the United States. However, it is important to take care when identifying these amazing birds, as they closely resemble red-shouldered hawks.

In the United States, red-tailed hawks can be taken for falconry, a type of hunting sport using birds of prey. Strict rules control when and how falconry birds are taken, however. As a result, this helps preserve the population and ensures we’ll be able to enjoy these birds for decades to come.

The main source of food for red-tailed hawks is small mammals. This includes mice and squirrels. However, like other types of hawks in Iowa, they may turn to amphibians, reptiles, and insects when mammals are scarce.

There are fourteen subspecies of red-tailed hawks found across the world, with several right here in the United States.

Sharp-shinned hawks are the smallest hawks in North America. There are 10 subspecies across North, Central, and South America. Most, however, are found in the United States.

Unlike other types of hawks in Iowa, sharp-shinned hawks are found in forests rather than fields and prairies. This has to do with how they hunt. Because of their smaller sizes, they rely on the element of surprise when securing their next meals. They’ll often hide in the forest’s thick vegetation and fly out to surprise their prey.

Another surprising fact about sharp-shinned hawks is what exactly their diet consists of. Despite being so small, they tend to target other smaller birds. This means that they’re often found around bird feeders – not to eat the bird seed you leave out but to hunt the birds that do.

While they prefer small birds, these hawks will also turn to mammals, insects, reptiles, and amphibians as needed. They’ve even been recorded catching bats!

Broad-winged hawks are averaged-sized hawks with stocky bodies and large heads. Although they can be found in Iowa and other parts of the United States during the summer, they move further south in the winter. Some even go as far south as Brazil to avoid the cold temperatures.

Like many other hawks, you can find broad-winged hawks in forests and woodlands. While they may share a habitat with other birds of prey like red-shouldered hawks and red-tailed hawks, they’ll make their nests in different areas. This helps to prevent territorialism and competition.

Broad-winged hawks also have a large, diverse diet. They will eat small mammals like mice and squirrels, as other birds of prey prefer. However, they’ll also eat centipedes, crayfish, toads and frogs, and even turtles.

These hawks in Iowa are easily identified by their stocky body and white-colored underbelly. While they can be found in the United States in the summer, you won’t find them west of the Rocky Mountains. They are a common sight in clearings in the forest.

The rough-legged hawk is also known as the rough-legged buzzard, although it’s in the family Buteo. It is typically found in the colder regions of North America, Russia, and Europe during the summer.

Of all the types of hawks in Iowa, rough-legged hawks can be a rare sight. This is because they’re usually only seen in this part of the United States during migration. While they spend their summers and breeding seasons in the Arctic regions, they migrate south in the winter.

Rough-legged hawks are also among the larger types of hawks spotted in Iowa. Their large size allows them to thrive in harsher conditions. The name “rough-legged” comes from their feathered legs, which add extra protection. The only other hawk in Iowa to have this feature is the ferruginous hawk.

Swainson’s hawks are large hawks found in North and South America. Their other names include grasshopper hawks and locust hawks. This is because of their preference for grasshoppers, which they will eat whenever available. However, they will also eat mammals and reptiles, especially rabbits.

Swainson’s hawks are among the longest-living hawks, reaching nearly thirty years old at times. While they’re among the more common types of hawks in Iowa during the summer, they can migrate as far south as Argentina during the winter. They are monogamous as well, meaning they only have one mate. As a result, they return to the north in the early spring, and many of these hawks return to their same nests.

Because Swainson’s hawks can travel all the way to Argentina, they are considered the raptors that migrate the longest distance each year. In just eight years, they can travel as much as 15,000 miles. That’s the same as traveling from one coast in the United States to the other almost six times!

Northern goshawks resemble many other types of hawks in Iowa. One of the best ways to identify them is by their unique stripes and markings. The eyebrow marking that juvenile northern goshawks have is the best way to tell them apart from Cooper’s hawks. They also have a unique sound they make either when in danger or during a hunt.

Northern goshawks mainly eat other birds, but they may eat mammals, reptiles, amphibians, and insects as well. It’s more common to catch them hunting smaller birds, although they’ve also been known to eat medium birds such as crows.

Ferruginous hawks are broad-winged hawks with brown and white plumage. Their underbellies are almost completely white, which can make them easier to spot in the sky. Like the rough-legged hawk, the ferruginous hawk is known for its feathered legs.

Out of many of the hawks in Iowa, ferruginous hawks are among the rarest despite living there. This is because of their threatened status. Some studies show that there might be as few as 4,000 breeding pairs left in the wild. This is due to deforestation and pesticide pollution, which limit their habitat and resources. 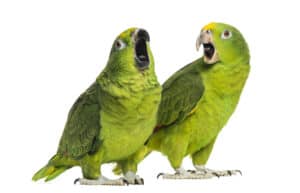