What Do Poison Dart Frogs Eat?

Poison dart frogs are, without a doubt, some of the most beautiful creatures on planet earth. Also known as dart frogs, poison frogs, or poison-arrow frogs, there are over 170 different species, all with their own unique colorings and ecological specifications. While many know that these aren’t an animal that you necessarily want to touch, they are often kept as pets due to how brilliant they are. Whether you are a pet owner or are just curious, let’s take a look at their diet and learn: what do poison dart frogs eat?

What do poison dart frogs eat?

Poison frogs eat ants, termites, and other small insects. Poison frogs have rather typical diets when compared to other frogs. They are generally very small, and their dietary preferences reflect this. Their most common foods are ants and termites, but there is a lot of mystery around their diet.

Poison dart frogs are varyingly toxic, depending on the species. Scientists believe that this is due to their diet, mainly insects that are high in alkaloids. Alkaloids are chemicals present in plants and often have effects on humans mentally and physically (caffeine, cocaine, morphine, and DMT are all examples of alkaloids). Plants use these chemicals as a way to defend against predators, but some insects have developed ways to eat them anyways. When poison frogs eat these insects, they modify the chemicals into their own protective mechanism. In captivity, frogs don’t develop this toxicity, further giving credence to the theory.

When they are tadpoles, they are known to eat algae, insect larvae, and natural detritus. Additionally, certain species will eat other tadpoles. One particular species deposits its fertilized eggs into a pool and will return later to deposit unfertilized eggs as a food source for the hatching tadpoles.

A complete list of the foods poison dart frogs eat

Here is a complete list of foods poison frogs will eat in the wild and in captivity:

How do poison dart frogs hunt?

Poison frogs hunt much like any other frogs hunt – with their tongues!

Frogs, on average, have tongues that are one-third the length of their body. When they snap it out, they can catch insects on the sticky mucous-covered end, and pull it back into their mouths. These retractable tongues are how many species catch their food, but the specifics of their predatory tactics mostly depend on the specific species.

The poison that the frogs release isn’t used for hunting, rather, for protection. When a potential predator sees how brightly colored the frogs are, they generally know to stay clear and want nothing to do with the dangerous little animals. In fact, the most dangerous of all poison frogs is the golden poison frog. A single frog has enough poison to kill ten full-grown men, even though they are only two inches long.

For that reason, golden poison frogs were used by the Emberá people of Columbia in order to tip their blowguns, hence giving them the name “poison dart frogs”. Scientific researchers have potentially developed a painkiller created from the golden poison frog and are currently creating synthetic versions of it.

Where do poison dart frogs live?

Anywhere there is moisture and water, poison dart frogs are likely to be present. They also love high-altitude tropics, freshwater marshes, lakes, and swamps across most of the South American continent.

They generally live on the ground but are occasionally known to live in trees and can be found up to 30 feet high (depending on the species).

A few of the most interesting poison dart frog species

Although we’ve already discussed golden poison frogs, they are worth mentioning again. Small and bright yellow, these frogs have enough poison in their bodies to kill ten men, making them the preferred dart poison for ancient tribes that lived in their region of Columbia. While they are deadly, they are also rare.

The strawberry poison frog comes by its name honestly. It’s orange-red with little flecks of black and blue across its body. It’s easily one of the most beautiful animals globally and has enough toxin to make potential predators think twice—ingestion of the toxin results in convulsions, paralysis, and death.

The yellow-banded poison frog lives in Venezuela, Brazil, and Guyana. It’s found in humid rainforests and is jet black with yellow bands crossing its body. They live in groups and are very territorial. In fact, different groups will attack one another in their own version of “frog wars”. They also have one of the loudest calls of the poison frogs.

The dyeing poison dart frog lives alongside the yellow-banded frog but is radically different in color. They are generally neon blue with black splotches or dots across their body. With a color so rarely found in nature, they look almost alienlike in their striking garb.

For a final example, let’s look at the reticulated poison frog. They are usually smaller than a human thumbnail, often coming in at less than one inch long. They are some of the more arboreal frogs (they prefer trees) and are often found way up away from the dirt.

What do I feed my pet poison dart frog?

Poison frogs, when kept at home, aren’t dangerous when fed a pet-store diet. The exact food depends on the species, but common insects include crickets, bean beetles, and fruit flies. Additionally, owners opt to have their food “dusted” with nutrients to provide a healthier diet. This vitamin powder is simply sprinkled on the insects before they are given, thereby transferring it to your frog.

You don’t need to worry about your frog being poisonous when they are kept in captivity. Their alkaline diet in the wild is what fuels their poison secretion, making them harmless (yet still beautiful) in captivity. 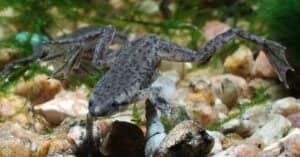 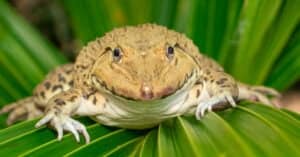