Written by Rebecca
Updated: January 24, 2023
©
Share this post on:
More Great Content:
Possum vs Opossum: How to Say It…
Opossum Lifespan: How Long Do Opossums Live?
Are Opossums Dangerous?
What’s a Baby Opossum is Called &…
Opossum Teeth: Everything You Need to Know
Opossum Poop: Everything You've Ever Wanted to…
↓ Continue Reading To See This Amazing Video

Have you ever heard the phrase playing possum? This refers to a particular behavior of an opossum (not a possum). When an opossum feels threatened by an animal or human, it has an unusual reaction. It plays dead. This is much different from other animals that try to run, freeze in place or even turn aggressive and go on the attack. That’s part of what makes this animal so interesting.

So, why do opossums play dead? How long do they stay still on the ground? Is this a successful tactic against a predator’s attack? Read on to get the answers to these questions and uncover more about this mysterious marsupial.

Opossums really don’t pose a serious threat to other animals. An adult measures 21 to 36 inches long including its tail and weighs 4 to 15 pounds. In short, these are small mammals. Furthermore, they move in a slow, awkward way so they aren’t likely to outrun a threat.

Playing dead is the most effective way opossums have to protect themselves against predators. Most predators don’t want to eat an animal that’s already dead. So, they usually move on if they see an opossum’s lifeless body on the ground.

What Does an Opossum Look Like When It Plays Dead?

When an opossum plays dead it doesn’t just fall over onto the ground. This mammal really looks like it’s dead! Its feet curl up in tiny balls and its body goes rigid. It opens its mouth like it has just taken its last breath. This marsupial may even start to drool.

Also, its eyes turn glassy like a creature without a sign of life. A predator can sniff at it, flip its body over or push it across the ground. An opossum that is playing dead will not move or get up and try to run.

Along with looking like it’s dead, an opossum also smells like it’s dead. When they play dead, they release a liquid from glands located near their tail. The mucous gives off a rotting odor. This is even more reason for a predator to move along down the trail. The appearance of being dead combined with the awful odor has helped countless opossums escape capture.

Is Playing Dead an Opossum’s Only Defense?

No. Though its ability to play dead is an effective way to deal with predators, an opossum has a couple of other defenses.

When threatened by a smaller predator an opossum is likely to give a low growl in an effort to frighten it away. This long-tailed animal may also bare its very sharp teeth at the threat. Whether an opossum growls or plays dead depends on how threatened it feels.

In mammals, the Virginia possum is known as defensive thanatosis. “Playing possum” is an idiomatic phrase that means to pretend to be dead. It comes from a characteristic of the Virginia possum which is famous for playing dead when threatened. Possums can play dead for around 40 minutes to four hours.

What Animals Are Predators of the Opossum?

Opossums live in woods and forests. Some of their predators share this habitat including foxes, coyotes, owls, and hawks. They can be attacked by domesticated cats and dogs as well.

Humans are a threat to these animals, too. Opossums look for food almost anywhere including in streams, fields, wooded areas, garbage cans, and near busy roads. When people throw things out the car window including pieces of fruit or parts of sandwiches they are attractive to opossums.

They are active at night and sometimes are not seen by drivers. It’s not unusual to see a squashed opossum that has ventured out into the road at the wrong moment. Opossum babies are particularly vulnerable to being hit by cars on the road.

Are Opossums Able to Control This Playing Dead Behavior?

No, opossums are not able to control whether or not they play dead. It’s what’s called an involuntary response. This response is triggered when an opossum is cornered or is being stalked by a predator. Some biologists describe this behavior as going into shock or falling into a temporary coma.

How Long Does an Opossum Play Dead?

Opossums may play dead for a surprisingly long time. Most people assume that an opossum jumps up and runs down the trail the moment a predator or threat is out of sight. On the contrary, a possum can be in the play dead position for up to 4 hours! Remember, they are in a state of shock, so their body must have a chance to recover.

Are opossums and possums the same animal?

No, they are not the same animal. This is one of the most common misconceptions about opossums. Opossums live in North America specifically in the United States and the southern part of Canada. Alternatively, possums live in Australia, New Zealand, and China.

In regard to appearance, an opossum has grayish-white fur while a possum has golden-brown fur. An opossum’s fur is wiry and coarse while a possum’s hair is soft. Opossums can be heavier than possums. An adult possum weighs up to 9 pounds whereas an opossum can be 15 pounds.

One of the most significant things that set these two mammals apart is behavior. While an opossum can play dead, a possum doesn’t react to stress in that way.

Do opossums hang upside down by their tail while they sleep?

No. This is a misconception about this animal that probably came from cartoons depicting these animals hanging upside down. It’s true they can use their tail to grasp food and hold onto branches for balance. In fact, their tail can be considered an additional limb. If this small animal does hang by its tail it’s only for a moment when climbing from one branch to another.

What is the habitat of an opossum?

They live in woodlands and forests. They make a nest in underground burrows, woodpiles, or in hollow trees. These are shy, nocturnal animals that like to hide.

Is an opossum a rodent?

No. Though opossums look similar to rodents they are not rodents.

What is the lifespan of an opossum?

You may be surprised to learn the average lifespan of an opossum is just 1 to 2 years. An opossum living in captivity may live up to 4 years because it’s not under threat from predators.

No, they are not Endangered. Despite having such a short lifespan, opossums are listed as Least Concern with an increasing population. But how can this be when they live such short lives? It all has to do with their reproductive habits.

The mating season of an opossum goes from January to July. The gestation period of a female is just 12 to 13 days! She can give live birth to a litter of 7 to 13 babies. Some females have up to 20 babies, but since a mother can only provide milk to 13 babies not all of the babies in a litter will survive. So, it’s the number of babies that opossums have that keeps their population growing! 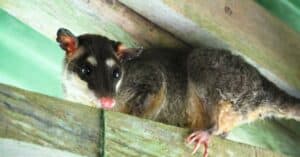