A calm and friendly breed! Click through all of our Chinook images in the gallery. 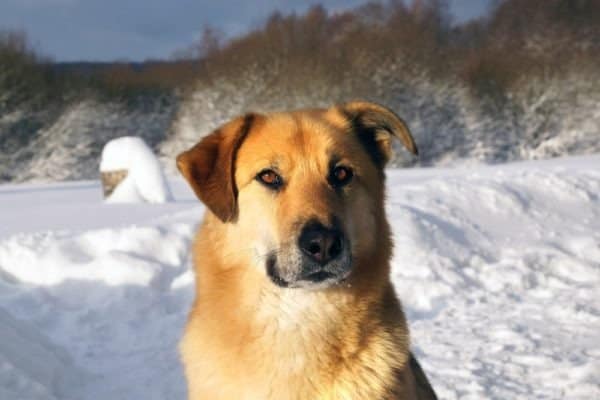 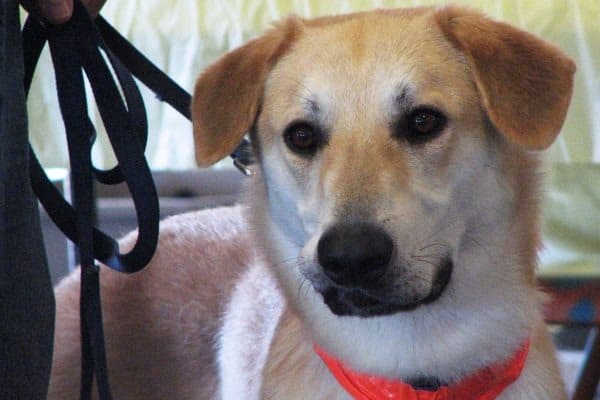 View all of the Chinook images!

Their high level of intelligence makes them relatively easy to train, but they can be stubborn. The origins of the Chinook date back to 1896. A polar explorer from New Hampshire named Arthur Treadwell Walden bred them to serve as sled dogs in Alaska. The intelligence and social nature of Chinooks make them excellent sled dogs. Those same traits make them a welcome addition to a family’s household.

Chinooks are categorized as working dogs. They are friendly, affectionate, and sociable with both dogs and people. Their floppy ears and curious, alert eyes are irresistible!

Owning a Chinook: 3 Pros and Cons

Chinooks are large dogs with a double coat of thick tan hair. The average height of a male is 25 inches at the shoulder while females are 23 inches tall. A fully-grown male weighs 90 pounds whereas a female weighs 65 pounds. At seven weeks, a puppy weighs approximately 10 pounds. These dogs are considered to be full-grown at 18 months.

Chinooks, like other dog breeds, have a few common health issues. Hip dysplasia is a hereditary health problem of some of these breed. When a dog has hip dysplasia it means the ball and the joint in the hip do not move together in the right way. This condition can develop in a Chinook as it moves through adulthood. Another common health issue is cataracts. This condition appears as a cloudiness in a dog’s eye or eyes. Cataracts make the dog’s vision blurry and can get worse over time. Atopy, a skin condition, is another common health issue. Atopy can be caused by all types of allergies. A dog itches and bites at its skin/coat causing bleeding and bald spots.

The most common health issues for Chinooks are:

The personality of a Chinook has been described as friendly and loyal. These traits make it a great dog for families with young children, teenagers, and any age in-between. A large amount of energy is another notable quality of this dog. This should come as no surprise considering they were bred to be sled dogs! So, these dogs need to live with families that can give them at least an hour of exercise each day.

The behavior of this dog breed can be described as sociable. It’s happy to see both dogs and people. Once again, this is no surprise knowing these dogs were bred to work on a sled team. They are known as working dogs or sled dogs. Mush! Mush!

How to Take Care of Chinook

Whether a family gets a Chinook puppy or an adult, it’s best to learn as much as possible about these dogs in order to give them the proper care. In addition to common health issues such as hip dysplasia, cataracts and atopy, there are other factors to take into account when caring for this pet.

A growing puppy has different nutritional needs than an adult dog. The following outlines the unique needs of both Chinook puppies and fully-grown dogs.

Chinook puppy food: Look for a puppy food that’s high in protein. Protein helps with a Chinook’s developing muscles, tissues, and organs. Calcium is another important ingredient that aids in developing strong bones which is important for dogs vulnerable to hip dysplasia. Puppy food that’s high in fatty acids assists with the development of the immune system which can help to prevent atopy and other allergies. Avoid puppy foods with corn or cereal listed in the first three ingredients. This is filler with very little if any nutritional value. These puppies should be fed four to six small meals a day. They burn a lot of energy!

Chinook adult dog food: An adult needs a diet that’s high in protein to maintain strong muscles and organs. Fish is a good source of protein. Food with vitamin A along with Omega-3 fatty acids contributes to healthy vision and may prevent cataracts. A small amount of carbohydrates gives an adult dog energy while not adding unnecessary weight. Calcium is another essential ingredient to keep an adult Chinook’s bones in good health.

As a note, split an adult Chinook’s food in half and feed your pet half in the morning and half in the evening. This helps an older dog to digest its food gradually and not leave it hungry in the evening before bedtime.

How much does a Chinook shed? They have a double coat of thick hair and sheds an average amount. As a comparison, an Alaskan Malamute is known to shed a lot of hair. A Chinook should be groomed one time per week to remove dead or loose hair from its coat.

A slicker brush is a helpful tool that can get down into the double coat of a the dog to remove loose hair and tangles. Be sure to choose a slicker brush with bristles that are rounded or have plastic tips. These bristles won’t harm a Chinook’s skin as it’s brushed from head to tail.

Chinooks are relatively easy to train. They are smart and focused which helps in obedience lessons. Keep in mind that some Chinooks have a stubborn streak that can slow down the training process. Siberian Huskies share this stubborn streak with them. Alternatively, Australian Shepherds are known to be easily trainable because of their alert nature. Of course, an owner can be successful in training a Chinook with the use of treats as incentives and making sure the dog knows the owner is in charge.

Would it be surprising to learn that Chinooks need at least an hour of exercise per day to maintain good health? After all, these dogs were originally bred in the state of New Hampshire to charge across snowy ground pulling a sled. Chinooks like to trot, run, jump and, you guessed it, pull things around! It could be an old cushion, a blanket, a huge branch or even an owner’s small cart.

This dog needs space to move around so it’s not a good choice for apartment living. Running in the woods, an enclosed yard or a dog park are just a few of the ways to give this dog proper exercise.

Chinook puppies are active, so they need to be fed four to six times a day. This feeding schedule gives them the energy they need to explore, run around, and play with family members. Just like adult Chinooks, these puppies need exercise every day. It’s best to allow them to exercise in a fenced yard until they learn commands such as stay and come that will keep them safe in an unenclosed area.

Do Chinooks get along with small children? Yes, they do! This dog’s affectionate nature and high level of energy pairs well with small children who want to run around the yard with the family dog. They like to cuddle and are even-tempered. Chinooks have a reputation for being excellent dogs for families with kids.

Chinooks are a rare breed of dog. At one time, there were very few Chinooks being bred. Many of the males in this group were being neutered so they couldn’t reproduce. By the early 1980s, Chinooks were almost extinct! However, their numbers have been growing slowly since that time. They are now the state dog of New Hampshire!

There are some dog breeds similar to this rare breed. Three examples are the Siberian Husky, the Alaskan Malamute, and the Eskimo.

Popular names for Chinooks include:

Though these dogs almost went extinct and are still considered a rare breed, there was a famous Chinook in the movies. It was Chinook the Wonder Dog. This animal actor starred in the films Trail of the Yukon (1949), Yukon Manhunt (1951), and Yukon Gold (1952).

How much does it cost to own a Chinook?

The initial cost of buying a Chinook from a breeder ranges from $1000 to $2500. There are some organizations that help people adopt Chinooks which is a less costly way to get one. Since this is a rare breed of dog, it may take a few months to find one.

Yearly vet costs for Chinooks can range from $300 to $500. This can vary depending on the health of the dog and the fees of different veterinarians. It costs between $50 to $100 per month for Chinook food.

Are Chinooks good with kids?

Yes. Chinooks are known for their affectionate nature and gentle way with kids and adults.

How long do Chinooks live?

The lifespan of a Chinook ranges from 12 to 15 years. Of course, some Chinooks live much longer than 15 years!

What is a Chinook dog?

A Chinook is categorized as a large, working dog. It has a light brown or tawny coat of thick hair. This dog is alert, friendly, and smart.

What is the difference between a Chinook and a Siberian Husky?

Yes. This sweet dog is highly recommended as a pet for a family of any size.

Are Chinooks herbivores, carnivores, or omnivores?

Chinooks are Omnivores, meaning they eat both plants and other animals.

What Kingdom do Chinooks belong to?

Chinooks belong to the Kingdom Animalia.

What class do Chinooks belong to?

Chinooks belong to the class Mammalia.

What phylum to Chinooks belong to?

Chinooks belong to the phylum Chordata.

What family do Chinooks belong to?

Chinooks belong to the family Canidae.

What order do Chinooks belong to?

Chinooks belong to the order Carnivora.

What genus do Chinooks belong to?

Chinooks belong to the genus Canis.

What type of covering do Chinooks have?

Chinooks are covered in Hair.

What is an interesting fact about Chinooks?

Chinooks are a calm and friendly breed!

What is the scientific name for the Chinook?

The scientific name for the Chinook is Canis lupus.