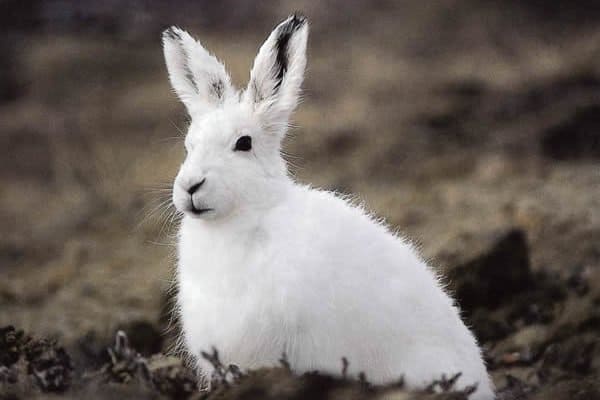 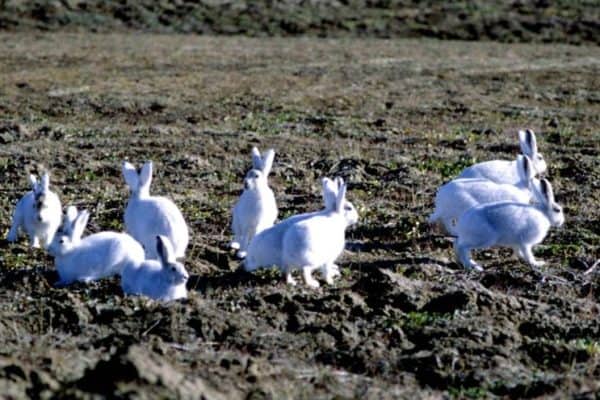 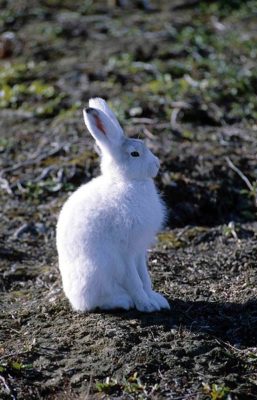 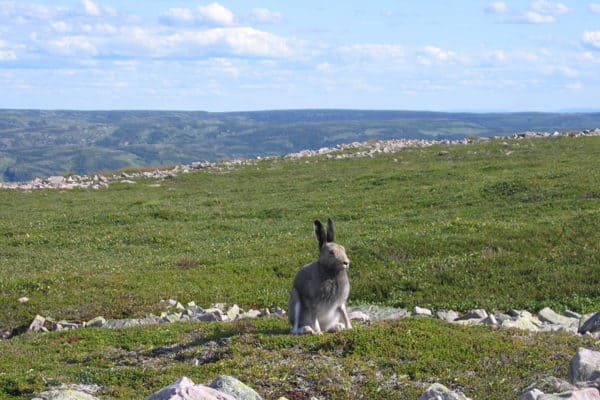 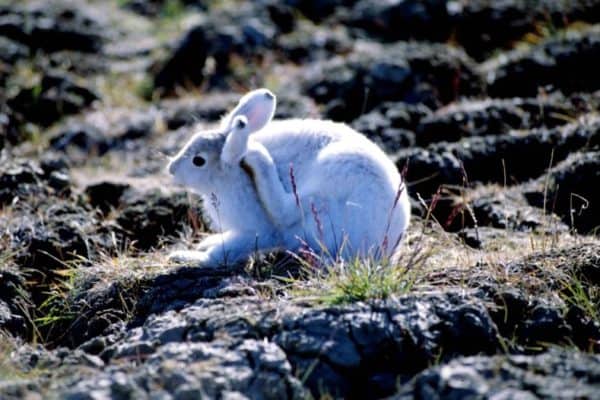 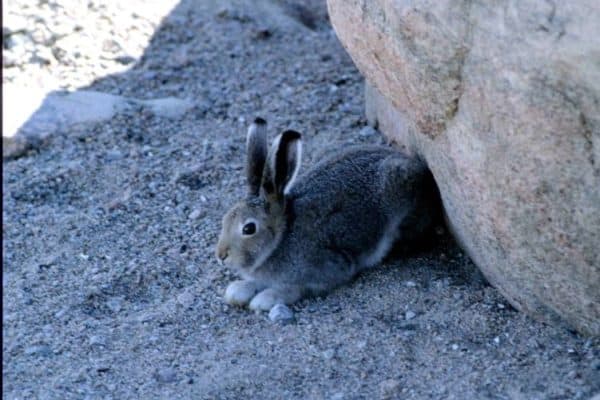 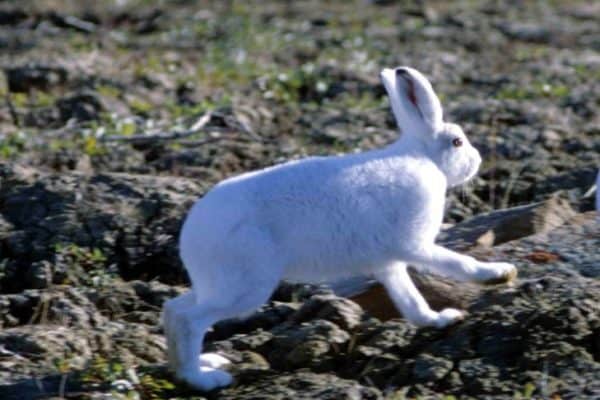 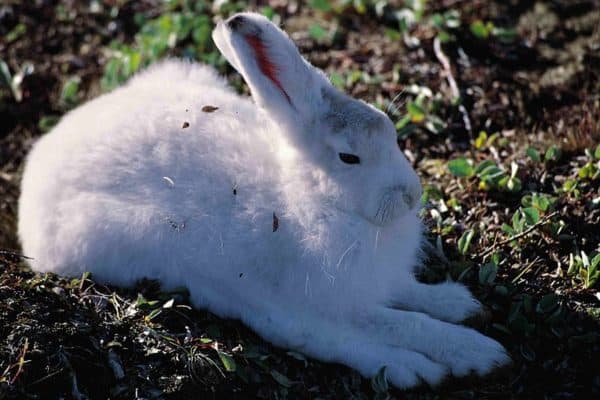 Arctic hares can run up to 40 miles per hour!

The arctic hare is the largest of all North American hares. It has long claws on all four feet, but these on its hind legs are especially long, to allow is to dig into packed ice and snow when it runs and to make a hole for shelter. It is also capable of hopping on its rear legs the way a kangaroo does, moving at speeds of as much as 30 miles per hour (48.3 km/h) as it hops. When running with all four feet on the ground they can reach 40 miles per hour (64.4 km/h). Brown or blue-gray in the summer, arctic hares turn white in the winter to help camouflage them in the snow. In the northernmost parts of their range, they are white all year.

• An arctic hare can hop like a kangaroo, using only its hind legs to propel it.
• Arctic hares don’t only eat plants, they have also been seen eating fish and meat.
• Arctic hares often live alone, but they sometimes gather in large groups consisting of several hundred animals.

The scientific name for the arctic hare is Lepus arcticus. The word “Lepus” comes from the Latin word for hare, while “arcticus” refers to the natural habitat of these hares, the arctic. It is also sometimes called the “polar rabbit.”

Arctic hares, along with other members of the hare family, are often confused with rabbits, but the two species, while related, are different animals. Hares typically have longer ears and longer hind feet than rabbits. The tail of a hare is longer as well. In the case of the arctic hare, its ears are actually shorter than other types of hares, which helps it to conserve heat in the cold climate in which it lives.

In much of its range, the arctic hare is brownish-gray or bluish, but its upper coat turns white as winter approaches, though the fur on its belly remains slightly darker. This change helps to hide it from predators during different seasons. Arctic hares living in the far north are usually white all year since their environment is most often snowy. The very tips of their ears are always black.

An arctic hare is about 17 to 25 inches (43 to 70 cm) long and weighs between 6.5 and 11 pounds (3 to 5 kg). This is about the same size as a cat. A large arctic hare, however, can get quite a bit bigger and weigh as much as 17 pounds (7 kg), about the same size as a small dog such as the Lhasa Apso or miniature schnauzer. The average arctic hare stands about as high as an adult human’s knees, though its ears will usually reach a bit higher than that.

Though arctic hares are often solitary and live alone much of the time, they also will sometimes gather together in groups of anywhere from six to several hundred animals, huddling together for warmth in the harsh cold of the arctic winter. Such groups are referred to by several different names, including a down, band, husk, or warren.

Hares are typically very shy, a necessary survival technique since they are hunted by many different predators. Though they will attempt to outrun a predator if necessary, they may choose to sit still so that predators won’t notice them. Arctic hares can also sit tall on their hind legs, scanning 360 degrees of their surroundings for predators, and hiding if they spot one. 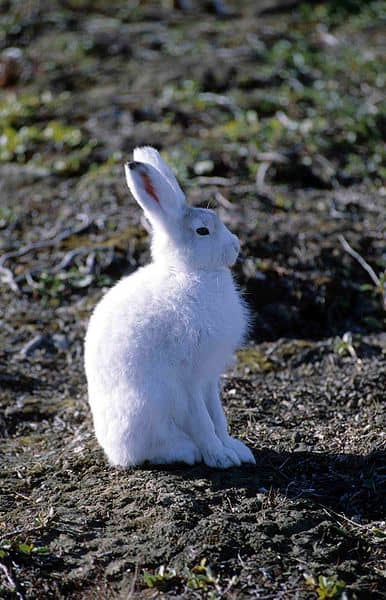 Arctic hares live in the very northern parts of the North American continent. They range across much of Northern Canada, Northern Greenland, the Canadian Arctic Islands, Newfoundland, and Labrador. They thrive in the treeless tundra found in these areas and are not deterred by the bitter cold found in these places for much of the year.

Their bodies are made to withstand the low temperatures of the arctic. These hares have short ears to help them to conserve heat. They also have thick fur, compact bodies, small noses, and a high percentage of body fat that aid them in surviving in very low temperatures.

Arctic hares are considered omnivores, as their diet normally consists exclusively of plants but with other food sources mixed in from time to time. Their normal food includes moss, lichen, and woody plants of all sorts. Depending on the season, they will also consume berries, buds, roots, leaves, and bark.

In addition to plants, arctic hares have been observed eating fish and the stomach contents of dead animals such as reindeer. Since the arctic tundra can be an extremely harsh environment, this dietary adaptation benefits the hare by promoting survival through opportunistic eating.

With the longest and straightest incisors in the hare family, arctic hares are also able to grab plants growing in awkward locations, such as between rocks, allowing them to find food where other animals might starve. In winter they will also dig down into the snow to find food.

The arctic hare is an important food item for almost every predator that exists in the northern part of the North American continent. Without them, many meat-eating animals could not survive. Some of the arctic hare’s predators include the arctic fox, the red fox, the gray wolf, ermine, snowy owls, and the Canada lynx.

Humans are also a traditional predator of this animal. Many people who live in the Arctic hare’s territory depend on hunting them for food and for their fur, which people make into clothing of various sorts. These hares are sometimes the only food available for Native Americans living in the far north.

The harsh weather can also pose a threat to the arctic hare, as it can be difficult to survive the bitter cold winter weather. This is especially true if the hare’s food sources are buried under deep snow. Hares can huddle together for warmth, but if they can’t find food they will end up starving to death

Arctic hares mate in April or May. Although these hares often band together in large groups for feeding and for warmth, during breeding season they separate from one another and set up individual territories. During this time the males, called bucks, may spar over females, known as does, with the male literally placing his paws over the female’s back and engaging in a sort of boxing match with other males as he claims his mate.

Eventually, each hare has its own place, though it is not unusual for one male to have more than a single female to breed with in his territory. At this point, each of the females establishes a nest, typically in a sheltered depression next to a rock or behind a bush. She will line this spot with a layer of grass and then add a covering of her own hair to make the nest soft and warm.

The female gives birth to a single litter of two to eight babies once per year, generally anywhere from late in the month of May through July, though in the northernmost parts of the hare’s territory the babies may be born a bit later. Unlike rabbit babies, which are born naked and blind, arctic hare babies are born with a complete fur coat and their eyes open. They can hop within a few minutes of being born. This helps them to escape predators from a very early age.

The mother stays with her babies, called leverets, constantly for the first couple of days, but then the young are left to themselves more and more often as their mother ventures out in search of food. The leverets begin to leave the nest when they are about two to three weeks old, but they’ll return when its time to nurse. The babies become independent quickly, and by the time they are eight to nine weeks old, they are fully weaned and on their own. They are able to breed and have babies of their own the following summer.

It’s uncertain as to how long arctic hares can live, as it’s never been accurately measured. They are thought to have a lifespan of about five years in the wild. They don’t do as well if they are raised in captivity, living only about eighteen months when kept by humans. Nobody knows why they don’t live as long in captivity, as such conditions often help animals by providing a plentiful food supply and a lack of predators, but it’s probable that the stress of being kept in artificial conditions shortens their natural lifespan.

Arctic hares are not considered to be endangered and are listed as “Least Concern” (LC) by the International Union for Conservation of Nature (IUCN), an organization that tracks the population status of all animals. While there is no exact count regarding the numbers of arctic hares living in the wild, their population exists in large numbers across the North American arctic and seems to be stable. There is no reason to think that these animals are in danger of extinction at any time in the foreseeable future.

What does an arctic hare eat?

Arctic hares eat mostly woody, brushy foods such as willow twigs and bark, plus they eat moss, sedge grasses, leaves, buds, and berries when they can find them. They will also consume fish and other animal protein, plus they will eat the contents of the stomach of dead animals, such as caribou.

What does an arctic hare drink?

The arctic hare usually eats snow or chews on ice to get its water. While not all animals can do this without dropping their body temperatures too low to survive, this hare is adapted to live in areas where all of the water is frozen and so can eat snow without freezing to death.

Where are arctic hares found?

Arctic hares live in the far northern areas of the North American continent including Northern Canada, Northern Greenland, the Canadian Arctic Islands, Newfoundland, and Labrador. They are found in the cold tundra in these areas, where they can range through the open areas without their movements or their view of predators being restricted by trees.

How do arctic hares change color?

Arctic hares change color twice a year. They change from grayish-brown in the summer to white in the winter, and then back again when winter is over. The exact mechanism that triggers this change is uncertain. Some scientists think that it is caused by the sun’s cycle, meaning that as the days get shorter the hares turn white, and then as the days get longer they turn dark again. Other scientists suggest that it is the actual temperatures that trigger the change, so cold weather brings on the white coats while warmer weather prompt hares to turn back to grayish-brown.

Whatever the exact mechanism that triggers change, arctic hares molt as winter approaches, meaning that they lose their old, dark hair as new white hair grows in to replace it. The same thing happens again as summer approaches, this time with the hares losing their white coats to have them replaced by new, darker fur for the warmer weather.

In the northernmost parts of their territory, arctic hares remain white all year, providing better camouflage in areas where snow and ice are present most of the time.