Written by Brandi Allred
Published: February 11, 2022
Share this post on:
More Great Content:
What Do Bobcats Eat?
Bobcat Size Comparison: How Big are Bobcats?
Are Bobcats Dangerous?
Meet the Mascots of March Madness: What…
Discover The Largest Bobcats Ever
Bobcat Teeth: Everything You Need to Know

Bobcats are one of the most easily recognized members of the Felidae family, though they’re often confused with lynx. They’re commonly known as wildcats in many parts of the United States. They have characteristic black tufts on the tips of their stiff ears, and fluffy cheek fur that gives them the appearance of having large sideburns. Bobcats can be found throughout the contiguous United States from northern Mexico to southern Canada. They’re currently listed as Least Concern. Their primary threats come from competing predators, habitat loss, and human encroachment.

Wildcats are the smallest members of the Lynx family; they’re also known as red lynxes. They’re generally tan to gray-brown in color, with distinctive black spots and bar markings on their tails and forelegs. They get their name from the characteristic ‘bobbed’ look of the tail. It’s much shorter than the tail of a cougar or house cat.

Here, we’ll learn all about just how big bobcats get, and how long it takes them to grow to full size. We’ll also take a look at the biggest wildcats ever recorded in the wild. Then, we’ll compare the size of the bobcat to the size of other creatures like coyotes and mountain lions. Finally, we’ll compare bobcats with lynxes, and determine whether or not you should be worried if you see a wildcat in the wild.

Bobcats become sexually mature around one year of age; males take a little longer to mature. Females gestate for two months, and have litters of 2-4 kittens, though they have been recorded having more. At birth, kittens have all their fur, spots included, and weigh less than two pounds.

Kittens stay in their den for the first month of their life. In that time, they grow in size and subsist mainly on mother’s milk. By the time they’re two months old, the kittens are almost fully weaned, and in the following months they begin venturing out with their mother. They grow steadily until around nine months to one year of age. By the time they’re full grown, they’re ready to leave the mother and find their own territory.

How Big are Adult Bobcats?

Adult bobcats range in size from 1-2 feet tall at the shoulder. They’re typically between 30-50 inches long, and weigh up to 40 pounds. Their size is largely dependent on where they live. The farther south they are, the smaller their body size. Wildcats that live in northern, colder regions, have larger bodies than those living in more temperate climates.

Male bobcats are bigger than females. On average, they’re several inches longer and taller, and can weigh ten pounds more than adult females. Both males and females are solitary, territorial hunters. Their favorite prey include hares and rabbits, but bobcats will also hunt smaller mammals, birds, and even insects. They’ve even been known to hunt and kill deer.

What is the Largest Bobcat Ever Recorded?

Hunters target bobcats for trophies and furs, and they’re often concerned with finding the largest bobcat around. The largest bobcats ever taken by hunters came from Minnesota and Wisconsin, though there are some unverified reports of monstrous bobcats in Maine.

The largest bobcat ever taken was shot by a Wisconsin hunter in 2009. It reportedly weighed 52 pounds. Before that, the record was held by another Wisconsin bobcat shot in 1984 that weighed in at nearly 49 pounds. The heaviest bobcat ever recorded in Minnesota weighed almost 39 pounds; not quite as big as the Wisconsin wildcats, but still larger than the average wildcat.

How Big are Bobcats Compared to Other Animals?

Bobcats are medium sized big cats. They’re far bigger than house cats, but far smaller than tigers. Their biggest competitors, in many areas, are coyotes, which are similarly sized. Like wildcats, coyotes stand up to two feet tall at the shoulder, and generally weigh up to 40 pounds.

In general, bobcats are much smaller than mountain lions. Mountain lions, also known as cougars, share many of the same habitats with wildcats, and the two sometimes come into conflict.

Bobcat vs Lynx: Which is Bigger?

Bobcats, which are also called red lynxes, are the smallest member of the lynx genus. Other species of lynx include the Eurasion lynx, Iberian lynx, and Canada lynx. Of the four, only the Canada lynx and wildcat live in North America, while the Eurasian and Iberian lynx make their homes in Europe.

In general, lynx stand around two feet high at the shoulder; males are bigger than females. The largest species is the Eurasian lynx, which can grow up to 2.5 feet tall. It weighs up to 80 pounds. The bobcat tops out at around 40 pounds, about half the size of the biggest Eurasian lynx.

Like many felines, bobcats are crepuscular. This means they’re most active at dawn and dusk. They prefer to stay hidden from other, larger predators like bears, wolves, cougars, and humans. If they happen to encounter a human, their first instinct is often to hide. If that doesn’t work, they may run, or try to make their escape in the trees.

With that being said, if you encounter a bobcat of any size in the wild, you should exercise extreme caution. They are predators designed to kill, capable of bringing down adult deer and even young elk, and are more than capable of wounding or even killing a human. If you see a baby wildcat, chances are likely that the fully grown mother is nearby; do not approach, or try to pet the kitten.

No matter the size of the bobcat, it should be left alone, and admired from a distance. 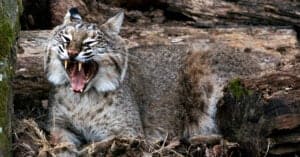 Meet the Mascots of March Madness: What are Arizona Wildcats? 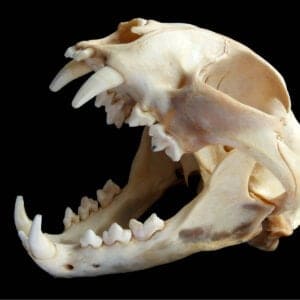 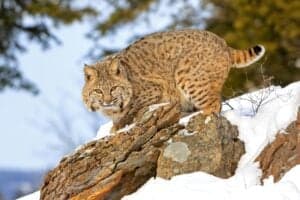