17 Resilient Animals That Adapt To Their Environment

These changes happen at a genetic level and are passed to offspring. Almost every living creature has adapted to its environment, but others seem to be better adapted than others.

Let us look at a few resilient animals that seem to be built for their environments.

While other goats spend most of their time browsing shrubs in the plains, mountain goats scale mountains that could challenge a seasoned climber. Mountain goats are specially adapted to their mountainous environment, making them arguably, the best climbers in the animal kingdom.

They have hooves that grip tightly on the rocky step slopes of their habitat, preventing them from falling from the nearly vertical slopes. Their legs also have strong muscles that help them balance their weight while running along steep slopes.

Hummingbirds are some of the smallest bird species, but their small size is adapted to the various environments it survives. Their long and narrow beaks facilitate the harvesting of nectar from tubular flowers.

Their long tongue also helps them suck the nectar from the bottom of the elongated flowers. Their lower beak is flexible to capture insects while in midair. Their flight muscles allow them to beat their wings up to 200 times every second and make quick and tiny movements in multiple directions.

They can move forward and backward and change direction sideways swiftly while accessing multiple flowers for nectar. In addition, hummingbirds can reach speeds of up to 60 mph when diving, enabling them to capture fast insects and escape predators.

“As smelly as a skunk,” goes the famous English saying that describes the animal’s defense adaptation. The skunk usually sprays a foul-smelling liquid from twin glands near its tail’s base to deter predators. The thick yellowish liquid can cause a predator to suffer temporary blindness, giving the skunk sufficient time to get away.

Additionally, skunks have claws that allow them to dig and burrow in search of food and dig dens to hide from predators.

Also, their white and black fur colorations help them to warn predators to stay off.

Cheetahs are the undisputed speed champions on land because their bodies are specially adapted for fast sprints. These felines have a relatively lightweight body for their height, allowing them to gain speed and reach 65 mph within three seconds. In addition, they have long legs, small heads, and flexible backbones that make them aerodynamic as they chase their prey.

The cheetah’s heartbeat accelerates to deliver oxygen and nutrients to the muscles. But their hearts can’t sustain the high speed for long, explaining why these sprints rarely surpass the 600 yards mark.

Owls are usually associated with wisdom, but many people don’t know they’re excellent hunters because their wings barely make any noise during flight. Like other birds, they live on trees. Owls are also adapted for hunting by their superb sense of hearing, allowing them to pinpoint prey over 100 yards away in complete darkness.

Owls have a neck that can rotate their heads 270 degrees and feathers that allow them to camouflage.

Consequently, all these features make it an effective and efficient hunter. An owl will likely spot prey before the prey sees it. Meanwhile, its quiet flight gives the prey little chance to get away.

The African elephant has earned the title of the largest terrestrial animal living today. It lives in the savannah and has many adaptations that make it thrive in this environment. For example, the savannah can be hot, but the elephant has large ears that help it to remain cool.

The elephant has a multifunctional trunk that enables it to grab food from trees, suck water and deliver it to its mouth, and throw dirt on its back to discourage pests.

Many predators roam the savannah, but the elephant’s enormous size and scary tusks keep them away.

Woodpeckers have chisel-shaped beaks that enable them to penetrate tree backs during pecks. In addition, the cells at the tips of their beaks regenerate fast, preventing their beaks from wearing out.

They also have long tongues that wrap around their brains and act as shock absorbers. In addition, these birds still have tail feathers that help them balance as they drill tree trunks.

Crocodiles are complex reptiles that have evolved over the years to allow them to live on land and in water.

Crocs have approximately 60 teeth and a powerful bite force that help them hunt big prey like zebras in water or on the shores. Their excellent swimming abilities and ability to remain submerged allow them to capture and drown their prey when necessary.

As its name suggests, the snow leopard lives in a cold environment. It has adapted to its environment by developing thick fur to help it maintain its body heat in the cold climate.

The spots and color of their fur help them blend into their environment, making it difficult for prey to notice them coming. The snow leopard also has amazing eyesight, allowing it to spot its prey even during bad weather.

Wolves predominantly live in cold environments and have many adaptations to help them thrive in this habitat. Their skin is covered by thick wooly fur that repels water and insulates them against the cold surroundings. Their coats are also oily, making them waterproof.

Wolves can move on snow without slipping because their paws have fleshy pads for extra traction. In addition, the toes are wide to spread the wolf’s weight, providing stability while walking or running on snow.

Wolves have an excellent digestive system. Their jaws can clamp down with a 500 PSI force or more. They have strong canine teeth capable of puncturing thick, ungulate hides and tearing into flesh. In addition, a wolf’s back teeth can crush any bones.

Interestingly, a wolf can eat 20 pounds of meat in a single meal but go for two weeks without food. Most of this food is digested in the small intestine, enabling it to store quantities of it in the stomach.

Giraffes live in the African savannah grasslands and feed on the acacia tree leaves. The giraffe has a long neck that enables it to reach the delicious leaves at the top of the tree. In addition, their rough tongue allows them to chew the leaves without getting pricked by the acacia’s thorns.

Its long neck also allows it to spot predators from a distance and get away before they can approach. Meanwhile, its spotted skin makes it blend into the environment, making it challenging for predators to spot.

Chameleons are among the few animals that can blend into the environment due to their ability to change skin color to resemble that of their surroundings. This camouflage makes it difficult for predators and prey to spot the chameleon. In addition, it allows it to hide and surprise its prey.

The chameleon has a long, sticky tongue that helps it surprise and capture insects from a few inches away.

Its eyeballs that swivel independently over 360 degrees enable it to capture a complete picture of its surroundings.

The lion has several adaptations that have propelled it up its food chain to its king of the jungle status. It has strong muscles, sharp canines, and protractible claws, allowing it to bring down prey.

Lions are social animals, allowing them to hunt in groups and have a higher chance of scoring a successful hunt.

Their brownish-brown color allows them to blend into the tall savannah grass, making it challenging for prey to spot them when hunting.

Penguins are flightless birds that predominantly live in Antarctica. However, some species live in warmer regions, predominantly in the southern hemisphere. Penguins have adapted to the harsh Antarctica environment in many ways.

They have many feathers that act as heat insulators, slowing the rate at which they lose heat to their surroundings.

They have flippers that make them excellent swimmers and allow them to dive and catch fish. In addition, their swimming skills help them escape predators such as sharks.

Camels are christened “the ships of the desert” because their adaptations make them some of the few animals that can survive in extreme desert climates.

The hump on their backs is filled with fat that allows them to regulate their body temperatures under the extreme heat and cold that characterize deserts. The fat is also an energy store that the camel converts to energy, allowing it to survive for long hours without food.

They also minimize their excretion by not sweating and releasing dry feces and syrupy urine. Their water conservation adaptation allows them to go without drinking for a long time.

The camel also uses its nose as a dehumidifier which extracts water vapor from the air it exhales. Then, it reabsorbs the extracted water.

Rattlesnakes are native to the Americas and mostly live in dry areas such as deserts and canyons. Life in deserts can be challenging because of the temperatures and food scarcity, but rattlesnakes are adapted to this environment.

They have a thermal sensor in front of their eyes, allowing them to sense the heat produced by prey, predominantly rodents.

Eagles live in environments within a few miles of water bodies, such as bays, coasts, lakes, and rivers. The eagle’s sharp vision enables it to thrive in these environments. It can spot prey while soaring high above water or ground.

It also has talons and strong claws that allow it to hold and carry its prey to its nests when it needs to feed its young.

Eagles build their nests as high as possible to maintain visibility. The nests, usually called “eyries,” can be as high as 60 to 100 feet from the ground.

Eagles can fly at altitudes of over 10,000 feet and soar in the air for long riding on natural thermal updrafts and wind currents. In addition, the eagle has a large wingspan that enables it to soar without having to flap its wings often, helping it conserve energy as it hunts for prey.

Texas Cat Fights a Coyote 1:1 and Does Shockingly Well 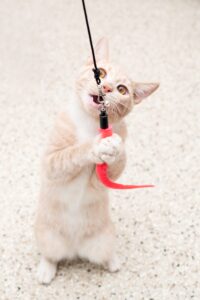