Click through all of our Chartreux images in the gallery. 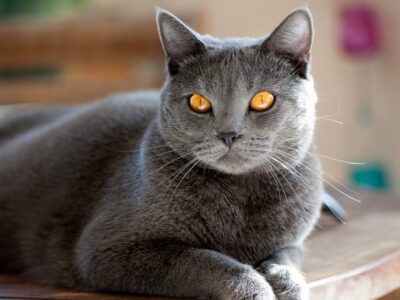 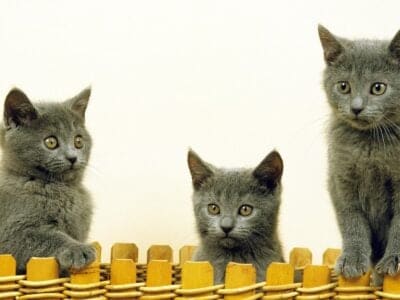 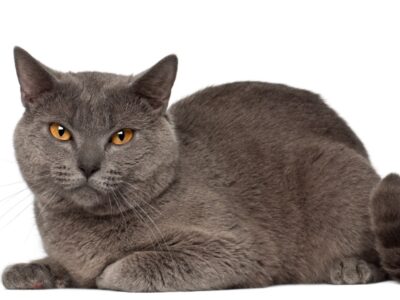 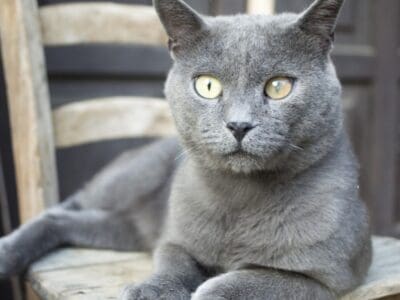 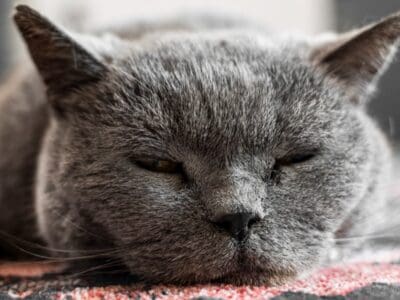 View all of the Chartreux images!

The Chartreux is a rare French cat breed with a sleek blue-grey coat that stands out. It’s often reminiscent of other grey cat breeds such as the Russian Blue or British Shorthair. No one knows exactly where it came from. One popular theory is that the cat was bred by monks from the Valley of Chartreuse in France, but this claim is difficult to substantiate. It’s also possible that the Chartreux may be named after a type of Spanish wool that was commonly imported into France.

Regardless, by the 1700s, the Chartreux had become highly prized by French farmers for their talents as rodent hunters in stables and homes. This breed first came to the United States in the 1970s and soon became recognized by nearly all major feline organizations. This article will cover what you need to know about the Chartreux, including its physical and behavioral features, care tips, and even the pronunciation of the name.

Chartreux Traits: What to Know before You Buy

The Chartreux is a quiet, good-natured cat, not overly prone to exuberant signs of affection or play. While they do love their owners, these cats tend to be independent and a little reserved most of the time. They often like to observe the situation before engaging directly in it. Owners may sometimes need to give them a little space, but the Chartreux will usually oblige in cuddles and playtime quite often.

Their easy-going and undemanding personality means they can be left alone for a long time without necessarily causing a mess. They also fit very well into homes with children and other pets. There’s a lot to like with this breed for owners who want an undemanding and no-nonsense cat. However, one downside is that this breed may not necessarily tell you when something is wrong. Owners will need to keep an eye on their cats and learn to read their behavioral quirks.

The Chartreux is a medium-sized cat, weighing anywhere between seven and 16 pounds and standing about nine to 11 inches tall at shoulder height. They are known for their very muscular and husky bodies and comparatively short legs. Despite their size, they have surprisingly fast reflexes and agile movements, which make them quite fun to play with. These cats love to chase lure toys and pounce on things.

The price of a typical Chartreux from a high-quality breeder is normally between $1,000 and $2,000. The price depends on several factors, including the pedigree and health of the cat and the demand and availability in your area. Most owners will end up paying at least $150 a month for necessities, including food, litter, toys, and the occasional visit to the vet.

Chartreux kittens are often available for purchase starting around 16 weeks old. Breeders will often vaccinate and neuter or spay their cats before selling them. The Chartreux is a slowly maturing cat and may take a full three years to reach adulthood. The coat may start with light tabby markings or spots at birth that slowly diminish with age, as it becomes more wooly in texture.

Cats also need a period of social and mental development early in their lives. While good breeders will socialize their cats within the first 16 weeks, the Chartreux will continue to need extra socialization opportunities for the next few months. The most important thing an owner can do is to give them time to adjust and warm up to new people. They also do well with a predictable schedule around the home.

The Chartreux has a typical lifespan of 11 to 15 years, but with excellent care and a bit of luck, they can live around 20 years old. This breed is prone to several health problems, including kidney disease, urinary tract conditions, and patellar luxation, a developmental disorder in which the kneecap will frequently dislocate. Cancer is also a leading cause of death. You can minimize the chances of your cat developing hereditary conditions by being very selective about whom you purchase from. You should only trust responsible breeders who frequently test their stock for known health problems. You should also schedule regular appointments at the vet to catch health issues as soon as possible.

All purebred cats must adhere to a standard set of shared characteristics. The purebred Chartreux features a rounded head, erect ears, rounded and expressive eyes with copper to gold colors, a muscular and robust body, a deep chest, and relatively short legs. The most defining trait of this breed is short to a medium-length double coat of blue-grey fur, which should feel quite thick and wooly to the touch. Disqualifying traits include a tail kink, green eyes, or signs of lameness. If your cat shows any deviations from these important features, then it could be a sign of a mix. Mixed breeds aren’t bad, but they will not have the same characteristics as a purebred cat. They are especially likely to show up in animal shelters.

Types of Chartreux Cats and Colors

The French Chartreux is known for its blue, almost silvery grey double coat of fur. Since this is such an important trait for the breed, no other fur colors or patterns are accepted. All members of this breed tend to look very similar to each other.

View all 107 animals that start with C

How much does a Chartreux cat cost?

A new Chartreux kitten from a high-quality breeder will normally cost you between $1,000 and $2,000. If this is out of your price range, then adoption is always a good option. It’s certainly possible to buy an adopted cat for $100 to $300.

How long do Chartreux cats live?

The Chartreux will generally live around 11 to 15 years.

How do I pronounce Chartreux?

The pronunciation isn’t quite as difficult as it looks. It essentially sounds like shar-true. The pronunciation of the “ch” is more like “sh” in English, while the “–eux” makes a kind of “oo” sound.

Where can I buy a Chartreux cat?

A responsible, trusted breeder should always be the first place you look for a new kitten. The benefit of having direct contact with the breeder is a very important part of the process. You can ask them direct questions about how their cats are bred and what health tests they’ve done. But no matter where you buy, whether it’s a pet store, breeder, or any other source, if they cannot answer important questions about the origins of their animals, then you should take your business somewhere else. It’s usually a sign that they might not have raised their cats responsibly. Adoption is always an excellent option as well, but because of the breed’s rarity in the United States, it may not be easy to find one. Check to see if there are any breed-specific rescue groups serving your area.

The Chartreux is a friendly cat, but don’t expect it to be incredibly outgoing and exuberant. Its personality tends to be very even-tempered and measured, and it won’t make too many demands on your time. Instead, they like to show affection through subtle behavioral quirks. You may notice that it sleeps in your bed or follows you from room to room. They also like to show off their incredible reflex and agility during playtime.

How can you tell a Chartreux cat?

Yes, it is a good idea to keep them indoors at all times to protect them from dangers outside.