Click through all of our Desert Locust images in the gallery. 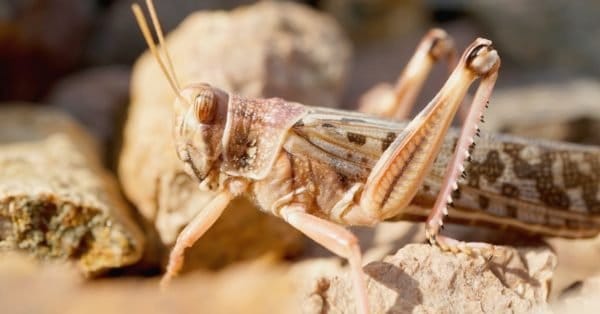 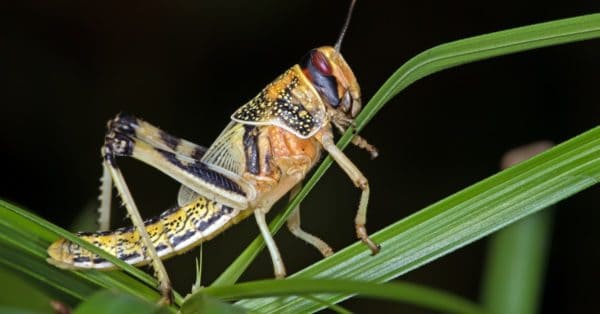 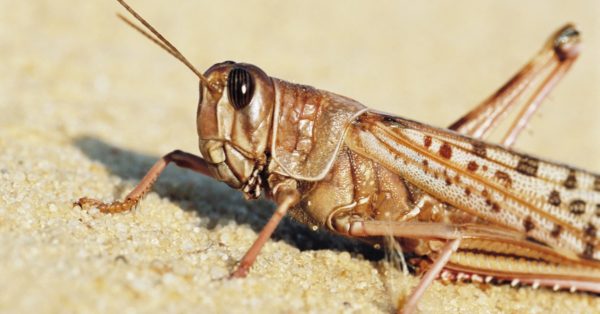 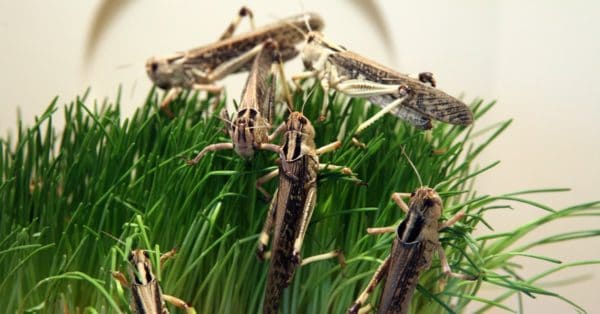 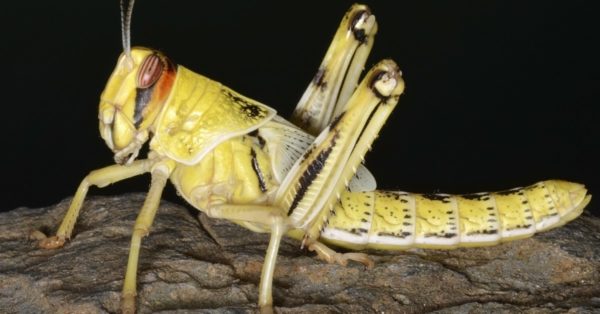 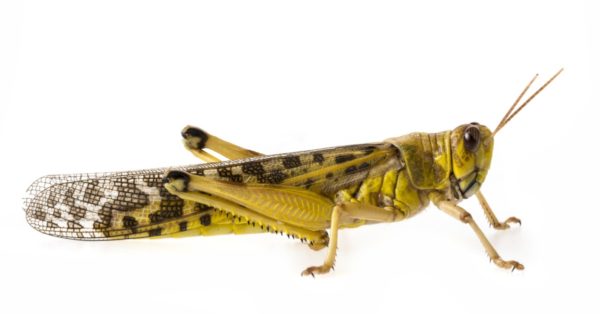 View all of the Desert Locust images!

“Desert locusts are tenacious insects that can eat anything and repopulate in massive numbers.”

The desert locust has lived in the dry and arid parts of the world for as long as humans can remember. These hardy insects consume vegetation equal to their body weight on a daily basis. When in solitary mode, desert locusts look like harmless grasshoppers. But when they start to swarm, these locusts can become a consuming force that can cause major economic damage to any society.

The scientific name for the desert locust is Schistocerca gregaria. The word “schistocerca” is derived from the Greek work for “long-legged bird” and is often used for grasshoppers. Meanwhile, “gregaria” refers to the herd or swarm-like behavior that locusts are known for. There are more than 30 subspecies of the desert locust.

Desert locusts belong to the Insecta class and are part of the Acrididae family. Because of this, one of the most common names for locusts is acridid. Acridids are a subspecies of the grasshopper, and European texts typically differentiate between the two. In America, both words can be used fairly interchangeably to describe both swarming and non-swarming members of this family.

Desert locusts are large insects that grow to be roughly 8 centimeters in length. They have an appearance similar to grasshoppers; major features include a hard carapace, two extremely visible back legs, four front legs that look like arms, and large translucent wings that are tucked against the sides of the body until the insect is in flight.

One of the most interesting features of the desert locust is that it can change form and color across its lifespan. If population numbers are low, desert locusts will develop as solitary members of the species. Solitary locusts have muted colors and a slightly smaller size. They are significantly more passive, eat less, and do not typically engage with other locusts.

However, if population numbers are high and resources are low, solitary desert locusts will start to transform into gregarious members of the species. A solitary locust can go gregarious within hours, although it may take a few days for the actual physical changes to take effect. Gregarious locusts have bright yellow carapace with black and white stripes. If a locust nymph is hatched during a gregarious period, it will be pink instead of grey.

Gregarious locusts are more active, may attack other locusts, and consume massive quantities of food in an attempt to compete for resources. Gregarious locust swarms are responsible for major crop loss throughout Africa, the Middle East, and any other areas where these insects are present.

Once a swarm has become active, it will travel rapidly across the continent, landing in areas and consuming crops until the vegetation is gone and the swarm moves on. Most locust swarms end after about a year when all available food has run out and the bugs are no longer able to repopulate nearly as quickly.

Whether or not they are swarming, locust migration tends to be downwind from the area where they were hatched. Most movement takes place at night, making it difficult to track where the band or swarm of insects moved to. However, researchers have noticed that locust migration follows the seasonal rains that are common in their natural habitat. In general, these insects will travel to areas where there has been recent rainfall, meaning that there will be ample vegetation and plenty of moist soil where the locusts can lay their eggs.

Desert locusts inhabit deserts and dry grasslands. This particular species of locust primarily lives in Northern Africa, but swarms can also be found throughout the Middle East and some parts of Asia.

When they are in solitary mode, desert locusts can typically found hiding in bushes, trees, fields, and anywhere else with a sufficient amount of edible vegetation. When a drought occurs, locusts will gather together onto any remaining patches of vegetation. This triggers the gregarious mode that leads to swarming, migration, and major crop losses in the local area.

Desert locusts are herbivorous insects that can eat nearly any form of vegetation. This ability to eat multiple types of food is referred to as polyphagy. A desert locust’s typical daily consumption might include leaves, bark, seeds, grass, flowers, and of course, crops from nearby farms.

So far, no crops have been found that are unappealing to locusts. Food crops like wheat, barley, rice, and corn are just as susceptible as for-profit crops like cotton and tobacco. If locusts swarm in your area, you can expect them to consume every bit of visible vegetation as far as the eye can see. This effect is so devastating that many people refer to locust occurrences as a “plague.”

If you happen to capture a locust, you should be able to feed them off any grains or edible plant matter that you have on hand. Locusts need to consume the equivalent of their body weight every day, which comes to about 2 grams. Whether it’s a handful of oats or some fresh timothy hay, your locust will probably spend the day munching happily on whatever you feed it.

Desert locusts are an incredibly hardy species and are listed as being of least concern. In fact, this species is so tenacious that many countries have tried and failed to exterminate it. Some researchers suspect that as global warming increases, conditions will get even more favorable for the desert locust, causing them to become a major threat towards sustainable food production.

With that said, desert locusts do have natural predators. Reptiles, birds, wasps, and other creatures that regularly feed on insects consider a single locust to be an excellent meal. Because locusts lay 100 eggs at a time and mature within weeks, they can sustain population levels even if they are being actively hunted in an area.

The biggest current threat to the desert locust is the use of pesticides on crops in their native habitats. Because locusts can eat any form of vegetation, this does not usually reduce their population numbers by a significant amount. Locust control is very difficult, and affected regions typically rely on a combination of predictive data and early warning systems to help protect their crops.

One of the factors that makes locusts so tenacious is their incredibly rapid life cycle. A locust can be sexually mature within a month after its egg was laid, meaning that swarms can repopulate at incredible rates as long as food resources are available.

Locusts have three noticeable stages of development. First, the female locust lays a clutch of around 100 eggs in a patch of moist sand or dirt. These eggs are buried slightly under the surface and will not hatch if the area is too dry or cold. Locust incubation takes about 2 weeks, but eggs may hatch later if the weather is not warm enough.

Once hatched, a baby locust is referred to as a nymph or a hopper. Locust nymphs look much like adults, but their wings have not grown in. Young hoppers are covered in hardened beige or pink carapaces. As the insect gets older, it will molt its carapace up to 5 times. The locust is soft and vulnerable immediately after molting, and it can take a few days for the new carapace to completely harden.

A locust’s wings start to grow in after it molts for the fifth time. At this point in its life cycle, the locust is not ready to mate. Sexual maturation can take as little as 2 weeks or as long as 6 months depending on weather conditions and the presence of other locusts.

Much like other species, desert locusts mate in pairs. After mating, females retreat to lay the eggs near the clutches of other females. Desert locusts are not known to attend to their young after hatching, although it’s not unusual for bands of hoppers to join back up with the adult swarm.

A desert locust’s life cycle typically lasts anywhere from 3 months to 1 year. Locusts tend to molt and grow as they get older, so you can generally guess the age of the insect by how large it is. Even if they find enough food and avoid predators, it’s very rare for locusts to live through their first cold season.

Because desert locusts are so numerous, their population is nearly impossible to track. A single swarm could have as many as 80 million individual members at one time, and swarms are located all across Africa, the Middle East, and Asia. Desert locusts are considered to be of least concern, so researchers are not currently intent on finding actual population data.

View all 33 animals that start with D

Desert locusts are polyphagous herbivores, which means that they can eat any kind of crop or vegetation. Locusts usually eat leaves, bark, and blades of grass, but they’ve also been known to feast on fruits, grains, and even flower gardens.

Desert locusts are not violent and will not attack a human if approached. However, the effects of a locust swarm can be incredibly devastating to local populations and are often seen as a type of attack. If locusts swarm over an area, the results could be anywhere from major economic losses to severe famine for the entire region.

Desert locusts are edible and are even considered kosher. The best way to cook a locust is to fry it or smoke it to bring out the flavor.

Desert locusts are herbivores and will not bite or attack human handlers.

What does a desert locust eat?

Desert locusts eat all types of vegetation. Wild locusts tend to eat leaves and grass, but they can also thrive on grains like wheat, oats, or barley.

How much food can a desert locust eat?

A desert locust needs to eat its body weight in food every day. For most locusts, this amounts to about 2 grams.

Locust eggs typically hatch about 2 weeks after they are laid in the ground. However, if weather conditions are not ideal, the eggs can stay dormant for around 2 to 3 months.