Saint Bernard dogs have a slow progression into mental adulthood, maintaining their puppy-like tendencies for years longer than other breeds.

Click through all of our Saint Bernard images in the gallery. 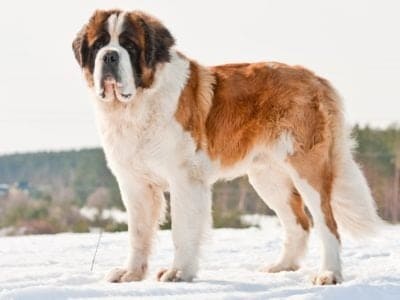 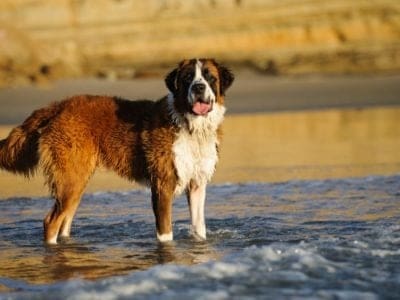 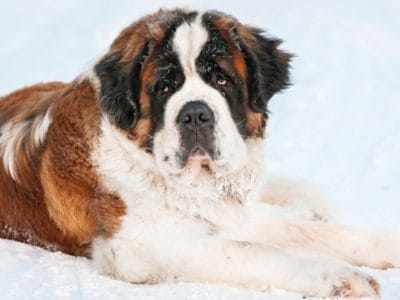 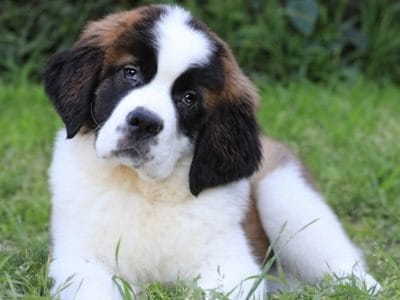 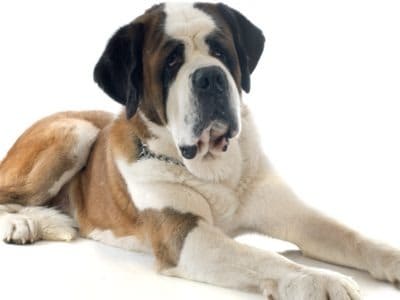 View all of the Saint Bernard images!

Saint Bernard dogs are large, and they are known to be extraordinarily muscular. They are working dogs that come from the Western Alps in Italy as well as in Switzerland. These dogs are known to mentally mature slowly and are not for the ones who are looking for a clean and composed pet. These dogs often drool and bring their mud into the house, making them a rather messy pet. They also do not settle well with the very warm temperatures, causing them to shed a lot.

3 Pros and Cons of Owning a Saint Bernard

The Saint Bernard is a large dog, both in weight and height. The female dogs are about 26 to 28 inches as adults, while the males are 28 to 30 inches.

That frame is supported with a rather hefty weight. Females can get as large as 140 lbs., though the males will go even higher to 180 pounds.

Like all the other living creatures, these dogs are also prone to many health issues including hip and elbow dysplasia which is the abnormal growth of the bones in these sockets. Osteosarcoma, a type of bone cancer, can impact the dog’s legs as well, though any bone can be impacted.

They are also prone to having Addison’s disease, a condition that prevents the body from producing the proper hormones. Veterinarians say that most pups with this condition will only live to be 4 years old.

Dilated cardiomyopathy can be another major concern for these dogs. This heart condition causes the heart’s tissue to thin out but still grow in size, preventing the blood from being pumped by it as needed.

Health and Entertainment for your Saint Bernard

Here is a list of the common health issues that these dogs suffer from:

The temperament of a Saint Bernard, much like the name suggests, is like a saint – calm and gentle. These dogs are known to be very patient and rarely get aggressive around strangers. However, most people are scared of these dogs because of their large size.

Even though it is not usually recommended to keep this dog in a family that has young kids, it can still be a great choice for such families. Be careful when a Saint Bernard is around a toddler as it can accidentally hurt him/her.

These dogs are not very active and will always need a push for exercise. They also make good therapy dogs, and it could uplift your mood to pet them lovingly.

How to Take Care of a Saint Bernard

No two dogs are alike, and Saint Bernard dogs require an elevated level of care, considering their disdain for exercise and their many health concerns. Here are a few things to know about taking care of these dogs.

The best food that you could feed your dog would include vegetables, chicken, salmon, turkey, brown rice, duck as well as fish. However, pet owners should avoid foods with a high-fat content or that are made of red meat (both raw and cooked). These types of food can irritate the joints, causing inflammation.

It is advised that a Saint Bernard is fed about five to six cups of high-quality foods every day. However, the meals should be divided into two for adult dogs. There are many dry and wet food brands on the market that provide these pups with the nutrients they need, which may have a higher price.

The coloring of their coats is easy to identify, featuring a rich ginger-red with white or white with ginger-red. Both the coats are known to shed heavily during the spring and fall seasons, so regular grooming is necessary. Ultimately, brushing your dog’s coat a couple of times every week to remove any loose hair that they might have.

It is not very difficult to train a Saint Bernard, as these dogs are intelligent and witty and pick up on your commands pretty quickly. You would need to spend just 15 minutes a day with them for them to learn all the basic tasks. However, you should begin and even complete the training process before they get all large and bulky.

Saint Bernard dogs are not known to be active, often needing a little push to engage in exercise. However, they do not need a lot of exercise. If you are looking for a jogging companion for yourself, this might not be the right choice. A short walk daily would be enough exercise for these dogs.

Saint Bernard puppies are to be taken care of much in the same way as you would take care of an adult Saint Bernard. However, you would need to break down large meals into 4-6 smaller meals for the puppies, as they do not eat a lot at once. Smaller meals help with the digestive process to avoid vomiting or overindulging.

It is always a good idea to start training your Saint Bernard when he/she is still a puppy. This foundation establishes good habits for easier training as the dog ages.

Even though this is a very friendly dog and is considered to do very well with children, it is recommended that you do not adopt a Saint Bernard if you have very small children at home.

The Saint Bernard is large in size and can hurt your toddlers by accidentally tripping over them. Therefore, it is always a good idea to wait till your kids grow up and then adopt a Saint Bernard.

Dogs Similar to the Saint Bernard

There have a couple of famous Saint Bernard dogs. However, none are quite as popular as the lead dog in the 1992 comedy Beethoven. He was so well-loved in the role that more movies were made to commemorate his adventures, featuring a female Saint Bernard and three Saint Bernard puppies.

Another famous Saint Bernard with a little less laughter in the film is Cujo from the Stephen King novel of the same name.

Popular Names for the St. Bernard

Here are some popular names for your Saint Bernard:

Saint Bernards are Omnivores, meaning they eat both plants and other animals.

What Kingdom do Saint Bernards belong to?

What class do Saint Bernards belong to?

What phylum to Saint Bernards belong to?

What family do Saint Bernards belong to?

What order do Saint Bernards belong to?

What type of covering do Saint Bernards have?

Saint Bernards are covered in Hair.

What genus do Saint Bernards belong to?

How much does a Saint Bernard cost?

How big does a Saint Bernard get?

How much does a Saint Bernard weigh?

Is the Saint Bernard dangerous?

The Saint Bernard is not usually aggressive. People are usually scared of them due to their large size.

Is the Saint Bernard protective?

The Saint Bernard is typically protective of their family. They are incredibly loyal and make helpful watchdogs.

Is the Saint Bernard good with kids?

Yes, the Saint Bernard is known to be great with kids. However, they don’t always understand how large their size is, so they may pose a risk to smaller children.

How long does a Saint Bernard live?

The lifespan of a Saint Bernard is usually 8 to 10 years.

What is an interesting fact about Saint Bernards?

What is the scientific name for the Saint Bernard?

The scientific name for the Saint Bernard is Canis lupus.