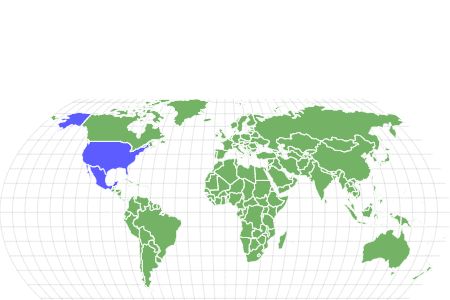 View all of our Gopher Snake pictures in the gallery.

View all of the Gopher Snake images!

“Gopher snakes can reach up to 9 feet long.“

The gopher snake, which includes 6 subspecies, is found primarily in the western United States, southern Canada, and northern Mexico. It thrives in arid climates below 2,000 feet altitude, and it is carnivorous. Though it has no venom, it has a painful bite that it uses to capture small prey (like birds and gophers). This snake is primarily docile, reaching up to 9 feet in length.

– Even though the bite of a gopher snake can hurt a lot, they don’t produce venom.
– They tend to be more abundant in arid climates below 2,000 feet altitude, like California, Utah, Wisconsin, and Texas.
– This snake is named for one of the main parts of its diet – the pocket gopher. Their diet also consists of other small mammals, birds, and their eggs, small lizards, and sometimes insects.
– There are six subspecies of gopher snake, which include the Sonoran gopher snake, Pacific gopher snake, and the bullsnake.

Where To Find Gopher Snake

The Pacific gopher snake, as the name implies, primarily lives along the West Coast along the Pacific Ocean for its main habitat. The range of this snake goes no further than California (since they don’t go in the water), but they can be found as far north as British Columbia and as far south as Mexico. They can be found in Utah, Wisconsin, Illinois, Missouri, and Texas.
They don’t like altitudes of more than 2,000 feet, staying close to the ground. Semi-arid and brushy areas are their preferred habitat of choice, which is why they are often found near farms. They also like pine forests, prairies, and dunes. They hibernate during the winter, willingly congregating with rattlesnakes, whipsnakes, and other breeds in a den. In Utah, these snakes will even boldly make a place for themselves in parks, which may intimidate individuals who aren’t familiar with their harmless nature.
When breeding season starts in June, male gopher snakes will no longer share these dens, becoming incredibly territorial over their habitat. However, as females start to lay their eggs in June and July, they’ll willingly congregate with other species again.

The gopher snake, which is also known as the Pacific gopher snake, California gopher snake, or Sonoran gophersnake, has the scientific name Pituophis catenifer. The name “Pituophis” comes from two Greek words – “pitys” (or “pine”) and “ophis” (or “snake”). “Catenifer,” however, is Latin, and it means “chain-bearing,” which is a description of the pattern seen on the back of the gopher snake.
It belongs to the Reptilia class and the Colubridae family.

The total population of the gopher snake varies among the six subspecies, which are divided by the region that they natively live in. The Coronado Island gopher snake, for example, primarily lives in Colorado and California, while the Sonoran gopher snake is found in Arizona, Mexico, and California.
Among all of these subspecies, there is no estimated population, but the IUCN considers them to be of “Least Concern.”

How To Identify Gopher Snake: Appearance and Description

Their average length is 4 feet, though the right environment and nutrition make it possible for them to grow to a size of 9 feet. Their entire back is decorated with saddle spots that are either reddish-brown or dark brown down their entire back as the basic morphs of this snake. They also have 2-3 rows of spots along both sides, though the spots on the second row tend to be a little larger. In total, the spots come up to 33-66 spots in total. Snakes in California have striped morphs that replicate these colors. In these
morphs, the ventral side is usually yellow with dark spots, becoming redder on the dorsal side.
How to identify a Gopher Snake:
– Tan, cream, or yellow ground color.
– 33-66 reddish-brown or dark brown blotches along the back, broken into 2-3 rows on each side.
– Second row of spots is larger on the side.

Gopher Snake: How Dangerous Are They?

The gopher snake is quite misleading in its behavior. When it becomes afraid or agitated by humans, it will make itself look bigger and flatten its head. It even makes a rattling noise with its shaking tail, which is only heard in dry areas. Though it may look like it is about to cause as much harm as a rattlesnake, it can’t – this species is non-venomous and not poisonous. In fact, they are typically docile, and they pose no threat to humans (though the same can’t be said for the small mammals they hunt).
If a gopher snake bites you, seek medical attention to ensure that the damage is no more than skin deep. The pain you experience with this type of bite is intense, so it is easy to mistake the animal for something more harmful, and it is always better to be safe than sorry.

Overall, the gopher snake isn’t a threat to humans, and they are quite unbothered by them. They don’t go after game that is bigger than a small mammal, so most humans aren’t even worried about seeing them in their yard. They aren’t dangerous or aggressive, and they mostly leave humans alone unless they feel threatened.

Can a gopher snake hurt you?

Yes. Even though they do not have fangs or poison, their bite can be incredibly painful as they clamp down hard on the skin. Proper wound care is a necessity after a bite, which is best done with a medical professional.

For the most part, gopher snakes stay away from humans. They aren’t harmful, but they should be left alone in their natural environment.

Is a gopher snake venomous?

No. The gopher snake is not venomous or poisonous, and it is mostly harmless.

What happens if a gopher snake bites you?

Gopher snake bites pack a lot of punch, but they won’t cause any long-term damage. The worst reaction will be pain over the bite, but there is no venom. It is not poisonous.

How big do gopher snakes get?

Though the most common size of the gopher snake is about 4 feet. However, their size can reach up to 9 feet long in some environments.

The gopher snake is typically about 4 feet long, and it is covered with 33-66 brown or reddish blotches along its back. It has a light-colored belly, which is typically yellow, straw, tan, or cream. 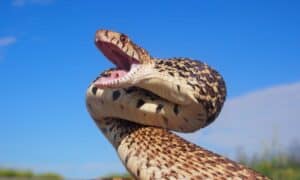