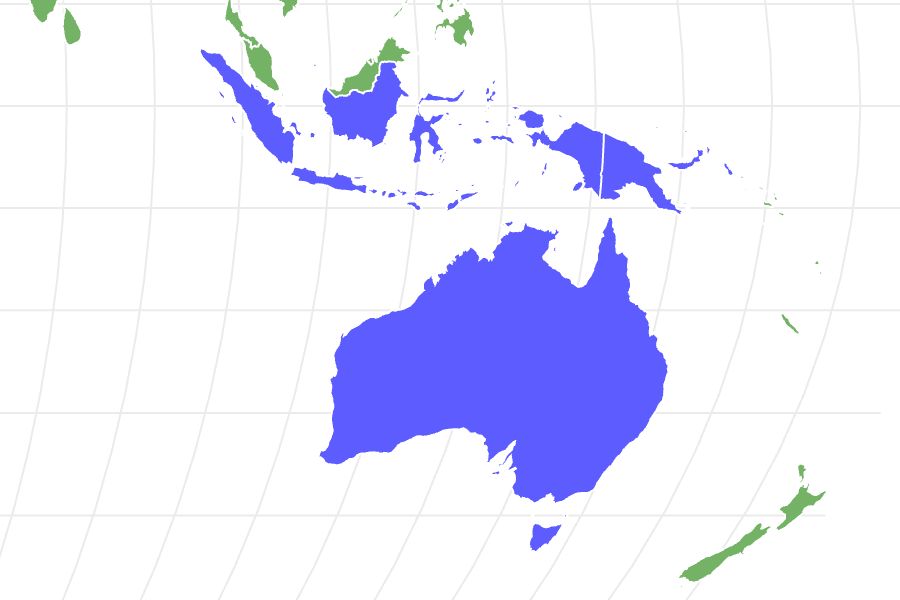 View all of our Green Tree Python pictures in the gallery.

View all of the Green Tree Python images!

Though the green tree python is relegated to a relatively localized population in and around Oceania, their distinctively bright green appearance and interest from amateur snake enthusiasts have transformed them into increasingly popular pets. Despite that, these are wild and cunning snakes whose reputation for being aggressive is rooted in an inherent shyness towards humans. Through a combination of trickery and patience, these snakes manage to sate their appetites for mammals and reptiles while rarely having to leave the treetop canopies they call home. And the ostentatious green coloration of these snakes is actually a camouflage mechanism that helps them conceal themselves more capably in rainforest habitats.

Where To Find the Green Tree Python

Green tree pythons are found only in Australia and nearby islands like New Guinea and Indonesia. Despite this narrow population distribution, some variations like the Biak green tree python are limited to a very narrow geographic range — in this case, a relatively small region within Papua. As their coloring would suggest, these snakes prefer vibrant rainforest habitats, although they may be discovered in less wet forests as well as in territories of fresh growth.

Age is actually a major factor in the type of habitat these snakes prefer. Adolescent snakes prioritize forests with less dense canopies since sunlight can reach them more easily and provide them with the nourishment they need. As they mature, these snakes tend to develop more patient hunting methods that can better conserve energy and thus move to areas with thicker canopies that can provide better protection from predators.

As more people begin to keep these pythons as pet snakes, it’s possible their location range will expand significantly. Unfortunately, it’s hard to know the price specific ecosystems would end up paying for the introduction of these cunning albeit nonvenomous predators into the wild.

The green tree python doesn’t have any other common pseudonyms, but its scientific name is Morelia viridis. The Latin is rather mundane and literal. Viridis is Latin for green and refers to the coloring of the snake, while Morelia is the name of the genus that these snakes belong to. All eight of the snakes in this genus are predators known for their large size and location range limited to Oceania.

In the wild, green tree pythons are small in terms of both population size and geographic range — but they’re considered by the UICN to be a species of least concern. Though their range may be isolated by the remoteness of Australia and nearby island chains, their population size has remained consistent over the years. But the facts show that these reptiles are being sold as pet snakes throughout the world, and so close monitoring is important to ensure quick identification if the threat levels change.

How To Identify Green Tree Pythons: Appearance and Description

The easiest point of identification for the green tree python is the brilliant green hue of an adult’s body, but it’s not their only distinguishable feature. Their colors are enhanced by narrow yellow and white stripes that extend down their vertebrae. Identification between different members of this species can also be assisted by the fact that some express dots and other markings on their bodies in blue or yellow colors. The heads of these snakes resemble a diamond, and adults will grow to sizes of approximately five feet about a year into their lifespan.

How to identify a Green tree python:

Hatchlings typically display colors that are dramatically different from the bright green they’re recognized for as adults. Bright yellow and brick red are both common, and these colorations have developed to provide them with better camouflage in the open-canopy forests they tend to inhabit. They won’t develop their trademark green and yellow colors until they reach the age of six months to a year.

Though they occupy a relatively small geographic area, these pythons can actually appear in a number of different colors and patterns depending on where they live. In many cases, these mutations happened because of the isolated nature of the islands where these snakes live. Here are some of the most beautiful and common localities.

Green Tree Pythons: How Dangerous Are They?

These pythons are nonvenomous and normally don’t pose a danger to humans. In the wild, these snakes will usually keep to themselves — but if they’re kept as pet snakes, inadequate enclosure size can change the facts and back them into attacking. And being nonvenomous doesn’t change the fact that these snakes have over 100 teeth. A bite from this snake can often result in the price of an emergency room bill. Enclosure size should always be a priority when keeping them as pet snakes, but green tree pythons should also only be kept by experienced handlers due to their complicated temperaments.

While their vibrant colors have made these pythons a popular choice to be kept as a pet, these are still challenging reptiles that can be elusive even by the standards of other popular reptilian pets. The needs in terms of diet, location, and general care are similar to most snake species — but they don’t like to be held and aren’t afraid to bite if someone gets too close.

Where do green tree pythons live?

Green tree pythons can be found throughout Australia, Indonesia, and Papua New Guinea. You can find different variations of this species depending on which island you visit.

Is a green tree python a good pet?

Green tree pythons have a naturally shy temperament, but they don’t require a high level of maintenance needs. Though their temperament and price can vary depending on their locality, their long lifespan makes them a great long-term pet for more experienced snake handlers.

Is a green tree python venomous?

These snakes are not venomous, but a bite can still require hospitalization because of their size and the fact that they have over 100 teeth in their mouths.

Why are green tree pythons aggressive?

Green tree pythons have a reputation for being aggressive, but they actually tend to just be shy and afraid of humans. That said, they won’t hesitate to bite if you get too close.

This snake fits over a hundred teeth into its mouth, and it’s a powerfully built constrictor that can reach a length of five feet easily. While you’re unlikely to die as the result of a bite, it can be very painful and even require emergency medical care.

How big of a tank does a green tree python need?

The enclosure size for this type of snake should be at least two feet by two feet by three feet. While the dimensions themselves don’t need to be precise, it’s advised that there be at least eight cubic feet of space.

What is the temperament of a green tree python?

The green tree python is generally shy and withdrawn, but they’re known for having an aggressive streak. While humans aren’t a part of their diet, they’re more likely to bite you than to snuggle.

How do green tree pythons hunt?

Green tree pythons are arboreal ambush predators that hide among the canopies and wiggle their tails to draw the attention of curious prey. When prey ventures into reach, they’ll quickly lower their bodies and constrict their meal to death. These reptiles are assisted by heat-detecting sensors that make them especially adept nocturnal predators.

What do green tree pythons eat?