Horgis have a silly side and love to be the center of attention.

Fun Fact
Horgis have a silly side and love to be the center of attention.
Temperament
Active and social
Diet
Omnivore

Click through all of our Horgi images in the gallery. 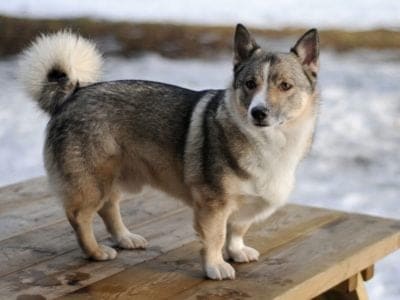 View all of the Horgi images!

Crossbreed a Siberian Husky with a Welsh Corgi and you have a Horgi. Another name for a Horgi is a Siborgi. Horgis are one of a large group of hybrid dogs created in the last 25 years. These hybrids are sometimes called designer dogs because they are the result of breeding popular purebreds. Breeders wanted puppies that possessed the most desirable qualities of each of their parents. These canines belong to the hybrid group.

Horgis are social, affectionate dogs with a high level of energy. Socialized Horgis are good with children as well as other dogs.

3 Pros and Cons of Owning a Horgi

This hybrid dog is medium-sized with a thick, double coat of fur. Adult horgis grow to be as tall as 15 inches from head to paw. Furthermore, both males and females can weigh as much as 50 pounds full grown. Seven-week-old Horgi puppies weigh around 8 pounds. These dogs are considered full-grown at 15 to 18 months old.

Horgis have some common health issues some of which they share with their purebred parents. One common health issue is Keratoconjunctivitis also known as dry eye. This condition occurs when the tear ducts are not producing enough fluid to keep the dog’s eyes moist. This moisture is necessary to wash dust, pollen, etc. out of a dog’s eye. Unfortunately, this condition can lead to an eye infection. A veterinarian can prescribe eye drops to help with this issue.

Another common health problem is obesity. When a relatively small dog like this crossbreed is fed too much and doesn’t get enough exercise it can cause excess weight gain. This can lead to heart trouble, joint issues, and other problems. Feeding a Horgi the right amount of quality fat and protein along with giving them daily exercise can prevent this issue.

A third common health issue is Intervertebral disc disease or IVDD. Essentially, this happens when a vertebra in this dog’s long, low back slips out of place and presses on its spine. The awkward or slow movement, cries, and lack of appetite are some signs of this condition. Medication and weight loss are two possible remedies. Some people buy ramps for their home, so their pet Horgi has a way to climb up onto the sofa or bed without jumping and risking IVDD. Common health issues of this crossbreed dog include:

Health and Entertainment for your Horgi

The Siborgi has a friendly, affectionate personality. They love to be around people whether a family member is working on a project in the backyard or sitting on the sofa watching a movie. Socialized Siborgis are good with children and get along well with other dogs.

These dogs are known for their high-energy behavior. They love to run, jump, play and explore their surroundings. Just think of all the energy of a Siberian Husky tucked into the long, short body of a Welsh Corgi! One of their most notable traits is their loyalty. They make good watchdogs staying alert to all of the happenings in a home and on the property. However, they are very friendly dogs, so they are not likely to scare a stranger away. These hybrid dogs are not shrinking violets. Just the opposite. They love being the center of attention!

How to Take Care of a Horgi

Giving the best level of care to a Horgi means learning as much as possible about this pet. Whether you get a Horgi puppy or an adult dog, it’s best to do some research on this hybrid pooch before bringing one home.

Feeding a Horgi the right type and amount of food can sometimes head off common health issues of this crossbreed. Not surprisingly, Horgi puppies and adult dogs need a different daily diet.

Horgi puppy food: Food consisting of at least 22 percent high-quality protein contributes to healthy tissue, cartilage, and muscles. Fat in their diet provides them with the energy they need to run around and check out their environment. Omega-3 fish oil and antioxidants support the health of a puppy’s joints, skin, and coat. Vitamin A and C contribute to this puppy’s eye health and may help to prevent dry eye. Calcium in a puppy’s diet strengthens their teeth and bones.

Horgi adult dog food: Because Horgis are prone to obesity, it’s best to feed an adult dog a diet with a limited amount of fat. Protein in the form of high-quality chicken or fish supports an adult dog’s muscles, cartilage, joints and keeps its coat healthy. Vitamin A is important for skin health and Vitamin E is an antioxidant. Fiber and access to freshwater help with proper digestion.

How much does a Siborgi shed? These crossbreed dogs are moderate to high shedders. Plus, their shedding increases with the change of seasons. But a good grooming routine can help an owner keep a lot of loose hair off the furniture.

Daily brushing is required for the double coat of this hybrid dog. A slicker brush is helpful in removing loose hair from its coat. Pair a slicker brush with a wide-toothed comb to make sure you get the bulk of the dog’s loose hair removed. A bristle brush can be used to smooth down a Horgi’s hair and stir up natural oils leaving behind a shiny coat. A grooming glove is useful in removing dried, caked mud from a Horgi’s tail. Brushing your Horgi outdoors can help an owner to avoid cleaning up after a grooming session.

The double coat of a Horgi can trap pollen, dust, and dirt causing skin allergies in this hybrid. Excessive scratching and bald patches in a Horgi’s coat are both signs of skin allergies. A special diet, changing the environment at home and allergy shots are all possible treatments.

Horgis are intelligent dogs but tend to get distracted during obedience training. It’s best to conduct short training sessions and use a lot of positive words when lessons are learned. Patience is definitely an important element in training this clever dog.

The Beagle is another very intelligent dog that’s easily distracted during training.

The Siberian Husky and Welsh Corgi are both energetic dogs. So, it’s no surprise Horgis are highly energetic dogs. They need at least 60 minutes of daily exercise to stay healthy both physically and emotionally. Socialized Horgis like to take trips to the dog park. A walk in the woods, a game of fetch in the backyard, or a walk on the leash around the neighborhood is all excellent ways to give this canine exercise.

Horgis are small dogs, so they are appropriate for people who live in apartments. Of course, they still have to get the exercise they need each day.

Like Horgi adult dogs, Horgi puppies have a tendency to wander. This makes it all the more important to allow puppies to exercise in a safe area such as a fenced-in yard or other enclosure.

When a Horgi is socialized right from the beginning, it is likely to be good with children as well as other dogs. Breeders who socialize their Horgi puppies are handling them and getting them used to be around kids and adults alike. This builds trust between puppies and the people responsible for their care. A socialized Horgi puppy grows up to be an adult dog that’s happy to be around all types of people!

Some dogs similar to the Horgi include the Swedish Vallhund, the Samoyed and the Pomeranian.

Some popular names for Horgis include:

View all 40 animals that start with H

How much does a Horgi cost to own?

Breeders charge a price of around $700 for a Horgi. There are also rescue organizations that help people to adopt Horgis. The adoption fee charged by a rescue is much less than the price charged by breeders.

Is a Horgi good with kids?

How long does a Horgi live?

How much does a Horgi cost?

No. These dogs have a double coat that can sometimes capture and hold dust, dirt, pollen, and more.

How big do Siborgis get?

Siborgis can grow as tall as 15 inches from head to paw. Furthermore, they can weigh as much as 50 pounds.