The Japanese squirrel hoards its food for the winter 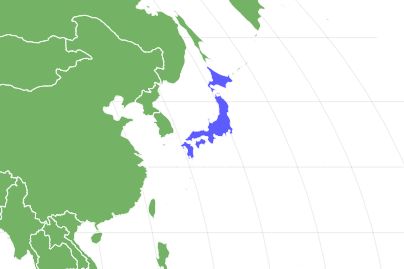 View all of our Japanese Squirrel pictures in the gallery.

View all of the Japanese Squirrel images!

The Japanese squirrel is a prodigious hoarder. It buries food in the ground to survive the harsh winter.

These small old-world rodents are the only species of non-flying or gliding squirrels entirely native to the Japanese mainland. They are not to be confused with the cute dwarf flying squirrel, which occupies a separate genus. The spread of human civilization has forced them into closer proximity with people to such an extent that squirrels now take up residence in houses, garages, and sheds. Nevertheless, there are many aspects of the Japanese squirrel’s behavior that remain understudied. Some of what we know about this species comes from the study of closely related old-world squirrels.

The scientific name of the Japanese squirrel is Sciuris lis. Sciurus, which simply means squirrel in Latin, is a genus of bushy-tailed squirrels that are found in both the old world and new world; it includes the Eurasian red squirrel, the Eastern gray squirrel, the fox squirrel, and numerous other American squirrels (the cute Japanese dwarf flying squirrel is part of a separate genus). It’s not clear where the species name “lis” comes from, but it appears to be a Latin word for quarrel.

The Japanese squirrel actually looks very much like other members of the squirrel family. It is characterized by a very familiar bushy tail, cute black eyes, broad head, sharp claws, and big tufted ears. The squirrel’s dense fur is grayish-brown with white on the stomach and patches of red or orange around parts of the lower side. In the white winter months, the fur develops a slightly grayer coat around the back and tail as a form of camouflage. It is distinguished from the dwarf flying squirrel by the lack of skin membranes and the smaller eyes.

The Japanese squirrel is about the same size as a human shoe. It ranges between 6 and 8.5 inches from the head to the base of the tail, while the tail itself adds another 5 to 7 inches when it’s fully extended. Males and females measure about the same size, but they can normally be distinguished by each other from the obvious sexual differences.

The Japanese squirrel is a solitary species. It mostly forages and lives on its own, though it may nest with other adults for the winter. Each individual maintains a home range a few acres in size. It will mark branches and tree trunks in its home range with urine as well as secretions from a gland on the chin. Based on studies of the closely related European red squirrel, it’s believed that this species has a rich suite of communication tools such as chucking calls, foot-stamping, tail flagging, and a combination of moaning and teeth chattering. Many of these are related to antagonistic or mating behaviors. Despite their solitary nature, however, Japanese squirrels appear to have distinctive hierarchies based on size and aggressiveness, which plays a role in the mating season.

The iconic foraging behavior for which the squirrel is known begins with the onset of the fall season. The squirrel industriously gathers and buries food in preparation for the lean winter months. Their remarkable intelligence probably evolved for this very purpose. They seem to have a special talent for figuring out how to access food, gather hundreds of nuts, organize them by weight and quality, and then hide the food for weeks or months at a time.

With their prodigious memory, they seem to remember nearby landmarks. Once they’re in the right area, they locate the food caches with their remarkable sense of smell. They can even find food caches buried deep under several layers of snow. Squirrels do not enter a total state of hibernation for the winter, but their activity does slow down to conserve energy as they live off fat and food stores until the arrival of spring.

As anyone with a bird feeder will know, one of the most amazing facts about the squirrel is incredibly acrobatic and agile. They can climb trees, branches, small wires, poles, and even fences without much trouble. When they leap in the air, their tail whips around to help them adjust the speed and direction of their fall, enabling them to survive great heights without incurring a single scratch. They can also rotate their hind feet a full 180 degrees to help them climb down trees.

The Japanese squirrel, as the name suggests, is only found on the island nation of Japan. It now occupies the main island of Honshu and the smaller southwestern island of Shikoku, but it may have disappeared from the western island of Kyushu. The Japanese squirrel shows a preference for lowland mixed forests and the lower slopes of forested mountains. It’s also found in suburban and even urban environments that harbor enough tree cover.

Since the Japanese squirrel is completely dependent on trees for food and habitat over its entire life cycle, this species is especially vulnerable to forest loss and fragmentation. This has apparently caused the Japanese squirrel to disappear from parts of its former range. They are also highly vulnerable to predators in all parts of their range.

What eats the Japanese squirrel?

The Japanese squirrel is preyed upon by foxes, martens, crows, raptors, and domesticated cats and dogs. If threatened by predators, the squirrel will run in a somewhat unpredictable zigzag pattern toward the safety of a tree or a hole. If it hasn’t yet been seen, then it will also freeze motionless on a branch or trunk to escape the notice of a predator. Their grayish-brown fur may help them blend in.

What does the Japanese squirrel eat?

The Japanese squirrel is technically an omnivore. While it has been known to consume insects, the Japanese squirrel’s diet largely consist of seeds, buds, fruits, fungi, and flowers. The Japanese walnut appears to be a significant staple of its diet; the squirrel opens up the shell by chewing along the crease and then splitting it into two parts. The food is collected and buried in underground caches or trees every autumn, when it’s abundant, so it can be accessed during the lean winter months. Smaller nuts and seeds tend to be eaten immediately, while larger seeds tend to be hoarded in the ground. It may be said that the squirrel is a connoisseur of seeds and nuts. Only the most nutritious food is chosen.

Japanese squirrels have two distinct mating periods per year: one lasting from February to March and another from May to June. When the female is sexually available, several males will chase after her in an attempt to secure mating rights. The sexual behavior is polygynous, meaning that a single male will have multiple female partners. The largest and most dominant male will usually secure the most mates for himself; smaller and weaker males may lose out on the opportunity to spread their line. For female squirrels, body size and social rank signify fertility. They tend to draw the most attention from males.

After a 40-day gestation period, the female squirrel will produce a small litter of two to six kits at once. These kits are born mostly blind and helpless, measuring only about an inch in size. They are raised in leaf nests, dens, or burrows specially constructed by the female. For the first two months of their lives, they will feed on their mother’s milk, after which time they will begin to forage on their own. By the following spring, the squirrels are sexually mature and reading to start reproducing.

The rate of survival for the kits seems to be based on the body size of the mother. If the mother loses too much weight during lactation, then the kits are much less likely to survive the first few months after birth. The average lifespan of the Japanese squirrel hasn’t yet been estimated, but given the numerous threats they face in the wild, it’s probably quite low. Based on a study of closely related species, it’s believed that they can potentially live more than 10 years in the wild and up to 15 years in captivity if they can avoid diseases and predation.

The Japanese squirrel is currently classified as a species of least concern by the IUCN Red List. It’s not known how many squirrels reside in the wild. While numbers appear to be generally stable through most of Japan, the loss of its native forest habitat might be a significant problem, contributing to the decline of this species in the western part of its range.

The Japanese squirrel is actually an omnivore. While most of its diet consists of plant matter, it does sometimes opportunistically consume insects to supplement its diet.

Can you have a Japanese squirrel as a pet?

That depends on the local laws regarding exotic pets in your state or country. Some governments may restrict or ban the sale or ownership of any wild animals. Even when ownership is permitted by law, a squirrel may not necessarily make for the best pet. Their behavior is often skittish and unpredictable, even after being socialized around people; their needs are difficult to meet, and many vets may not have the expertise to care for them. This may not necessarily dissuade particularly committed owners who can devote the time and money to their care.

How big are Japanese squirrels?

Japanese squirrels can grow up to 15 inches in length and weigh up to 310 grams.

Japanese squirrels do not pose any danger to people, but they can sometimes cause damage to property.