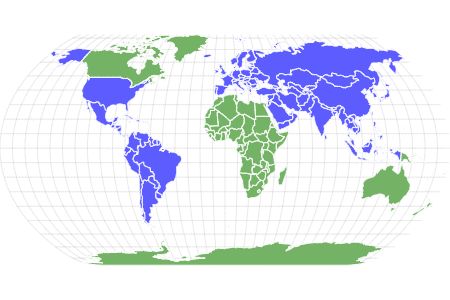 View all of our Flying Squirrel pictures in the gallery.

View all of the Flying Squirrel images!

A flying squirrel has the power to glide 300 feet through the air.

• These squirrels can gather and store up to 15,000 nuts in one season.

• The 50 plus types of flying squirrels are in a group known to scientists as Pteromyini.

• The extremely large eyes of these small rodents allow light to pour in so they can see at night.

• The official conservation status of these squirrels is Least Concern.

The scientific name for a flying squirrel is Pteromyini. ‘Ptero’ is a Greek word meaning wing and ‘myini’ means small. It belongs to the Sciuridae family and the Mammalia class.

These squirrels have a light coat of brown fur on their back and white fur on their stomach. Some types of squirrels have small differences in fur color. For instance, the southern flying squirrel has all-white fur on its stomach while a northern flying squirrel has belly fur that’s white at the tip and darker near the skin. The most notable feature of all of these squirrels is a pair of large, dark eyes. Their eyes let a lot of light in which helps these animals to see their surroundings as they hunt at night.

These squirrels have a flat tail, four small feet, and long whiskers. Their whiskers help them to avoid running into objects while hunting at night. Like their cousin, the ground squirrel, they have sharp teeth they use to cut into black walnuts and other types of nuts.

Adult squirrels have a body measuring 9 to 14 inches long with a tail of about four inches. They weigh from two to eight ounces. For reference, a 14-inch long squirrel is almost as long as a bowling pin. Furthermore, a squirrel that weighs eight ounces is as big as an adult hamster.

The largest species is the Red and White Giant flying squirrel. It has a 23-inch long body with a tail measuring about 24 inches. Also, this squirrel weighs around 10 pounds. Alternatively, the Japanese dwarf flying squirrel is one of the smallest types of these squirrels. It grows to be just seven inches long including its tail and weighs around five ounces.

These squirrels have a membrane or fold of skin called a patagium. This membrane spreads out on both sides of the squirrel’s body allowing it to glide between tree branches. If you look up at a flying squirrel moving from tree to tree, the membrane takes the shape of a square.

Though these squirrels can glide a distance of 300 feet, the average gliding distance is 65 feet. To get a better mental picture, when a flying squirrel glides 300 feet, it is traveling about as far as the Statue of Liberty is tall (not including the base it is on)! A squirrel that glides 65 feet is traveling a distance equal to the length of three adult giraffes.

These squirrels spend most of their time in trees as a way to stay safe from predators. When they do walk on the ground level, they are clumsy and will hide from a predator as opposed to trying to run away.

Adult and young squirrels live in nests with about eight other squirrels. These small squirrels are not aggressive and are rarely seen mostly because they are active late at night.

These squirrels live in Europe, Asia, North America, Mexico, and Central America. They live in deciduous and coniferous forests high up in the trees. A group of these squirrels may live in a nest that’s been left behind by a large bird or in a woodpecker’s hole in a tree. These squirrels stay in trees most of the time because they are more vulnerable to predators when they go to ground level.

Northern, southern, and all other species of flying squirrels like to stay warm! So, if the weather gets really cold in the wintertime, they survive by huddling with other squirrels inside a tree or in a nest to keep warm. Just imagine eight little Japanese dwarf flying squirrels huddled in a tree together!

What do these squirrels eat? These animals are omnivores and eat insects, flowers, bird eggs, nuts, fungus, and fruit. They have a varied diet and will eat whatever food source is most plentiful within their habitat.

A flying squirrel eats about 10 grams of food per day. This amount of food weighs a little less than a AAA battery you may put in an alarm clock.

For a full analysis of what flying squirrels eat, make sure to read our guide ‘What Do Flying Squirrels Eat? 13 Foods for this Cute Rodent.’

It probably won’t surprise you to know that these squirrels have many predators. Some of them include snakes, owls, hawks, weasels, raccoons, bobcats, and sometimes even domesticated cats.

Most of this animal’s predators live in or can climb into trees. This makes flying squirrels vulnerable to them. Plus, many of these animals are nocturnal so they are active at the same time. When looking for food, a raccoon may climb a tree to access a nest of these squirrels. Or, an owl may swoop down to capture a flying squirrel that has just taken off to glide toward another tree branch.

Humans are another threat to these squirrels because these animals are sometimes captured to sell as pets. Flying squirrels also face loss of their habitat whenever parts of a forest are cleared, and trees cut down.

These animals have a conservation status of least concern. Though their habitat is threatened, there are some things people do to help flying squirrels. For example, when the Cherohala highway was built in North Carolina, it was discovered that the highway was too wide for the northern flying squirrels to glide over. So, pieces of PVC pipe were attached to the top of poles on both sides of this highway. A squirrel gliding over this highway is able to safely grab onto the PVC pipe when they reach the other side. They sometimes even disappear inside the PVC pipe for protection against predators in the area!

During mating season, male squirrels chase females through the trees in a playful way. These squirrels breed twice a year. Breeding season happens from January through April and again from June through August. A male and female stay together for that breeding season and may not meet again. The gestation period, or pregnancy, lasts for 40 days.

A female squirrel gives live birth and can have up to six babies in a litter. However, most females only have two to three babies in one litter. A baby squirrel is about 2 ½ inches long from its nose to the tip of its tail. This is about as long as an adult human’s thumb.

Baby squirrels are called kits and are nursed by their mother in the nest for the first 65 days of life. They are born without fur and their eyes and ears are closed. This makes them very vulnerable to larger animals who might find the nest. So, the mother stays with them except when she’s out hunting food for herself. When they’re about three or four days old, the kits’ ears open. At 25 days old, their eyes open. The kits stay with their mother in the nest until they are four months old. At that time, they are able to find their own food and can survive on their own.

In 2018, the oldest fossil of a flying squirrel was discovered in Catalonia Spain by paleontologists. The fossil is believed to be 11.63 million years old!

Flying squirrels are omnivores with a varied diet of nuts, fruit, insects, and birds eggs.

How many flying squirrels are left in the world?

What’s the difference between a flying squirrel and a sugar glider?

If you’ve ever seen a sugar glider you know that they’re very similar in appearance to a flying squirrel. Both animals have the body of a squirrel as well as folds of skin that allow them to glide through the air. But there are some differences.

No, they aren’t dangerous animals. The small size of a flying squirrel makes it vulnerable to many types of animals. So, this rodent does it’s best to hide and avoid dangerous situations. Of course, if a flying squirrel is trapped in a corner or feels it can’t escape, it is likely to bite a predator in an effort to getaway.

How much does a flying squirrel cost?

Although they shouldn’t be, sometimes flying squirrels are sold as pets by people who breed them or remove them from their natural environment. They may be sold for a few hundred or several hundred dollars depending on the seller’s terms. However, before you consider buying a flying squirrel to keep as a pet keep in mind that they’re not meant to be kept in a cage. Plus, the seller may not have taken good care of the flying squirrel you buy or have obtained it in a harmful way.

You can learn about these amazing creatures by reading about them, watching videos, or visiting them at the zoo. There are many ways to appreciate flying squirrels without bringing one into your home.

What Kingdom do Flying Squirrels belong to?

What phylum do Flying Squirrels belong to?

What class do Flying Squirrels belong to?

What family do Flying Squirrels belong to?

What order do Flying Squirrels belong to?

What genus do Flying Squirrels belong to?

What type of covering do Flying Squirrels have?

Flying Squirrels are covered in Fur.

In what type of habitat do Flying Squirrels live?

What are some distinguishing features of Flying Squirrels?

Flying Squirrels have small bodies and furry membranes for gliding.

What do Flying Squirrels eat?

What are some predators of Flying Squirrels?

Predators of Flying Squirrels include cats coyotes, and raccoons.

What is the average litter size for a Flying Squirrel?

The average litter size for a Flying Squirrel is 4.

What is an interesting fact about Flying Squirrels?

Flying Squirrels can glide up to 90 meters!

What is the scientific name for the Flying Squirrel?

The scientific name for the Flying Squirrel is Pteromyini.

What is the lifespan of a Flying Squirrel?

Flying Squirrels can live for 5 to 8 years.

How fast is a Flying Squirrel?

A Flying Squirrel can travel at speeds of up to 15 miles per hour.

How to say Flying Squirrel in ...