Click through all of our Red Squirrel images in the gallery. 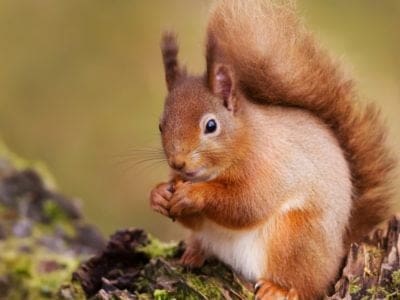 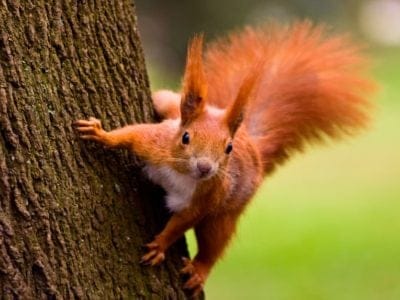 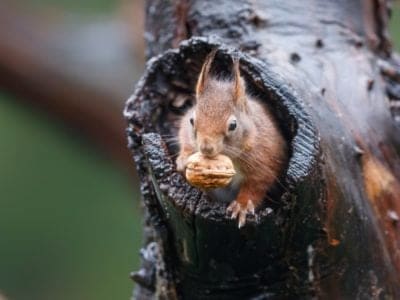 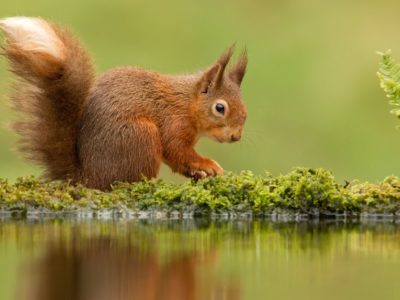 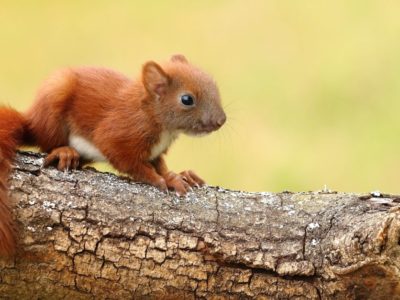 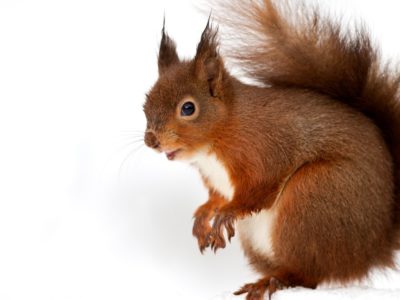 View all of the Red Squirrel images!

The American red squirrel is one of the most common mammals in all of North America.

As a type of rodent, these agile tree climbers are found almost anywhere with mixed hardwood and evergreen conifer forests. They’ve also adapted very well to urban and suburban environments. Renowned for their excellent memory, American red squirrels will bury their food for the winter and then return to it later to feed. While easily dismissed for their small size and ordinary appearance, they are actually quite remarkable creatures.

The red squirrel can be identified by the small but stout body, the relatively large paws, the bushy and curling tail, and the erect ears with small tufts of fur. Their long incisors, which help them cut through tough material, can grow 6 inches in a year and must be worn down by eating and gnawing. The back and face are covered with a rusty red color that turns slightly grey in the winter, while the underside of the body and the ring around the eyes are white. There are also black parts around the tail and nose.

Red squirrels are about the same size as a large book. They weigh between 7 and 10 ounces and measure about 10 to 15 inches with the tail included. Both males and females are similar in appearance.

The American red squirrel is a true expert at foraging for limited resources. The peak of their activity occurs in the fall when they prepare to stock up on food for the winter. The squirrel will bury thousands of different nuts every year in random underground caches around its territory. In order to find where they hid the food, the squirrel must rely on its excellent memory. Some studies performed on a similar grey squirrel demonstrate that they can still recall the solution of a puzzle two years after first learning about it.

For a small number of squirrels, the arduous process of nut collection may be too much work. They will spy on other squirrels that bury their food and then resort to outright theft. This competition for food may be a matter of life and death since the winter can be harsh and unforgiving. As the temperature drops, the squirrel becomes progressively more lethargic and inactive. It does not quite enter a state of hibernation, however, since it will leave the nest to forage and eat at least once a day.

Red squirrels are highly territorial in nature and do not tolerate the presence of intruders. Each one maintains a territory a few acres in size. Their aggression tends to ramp up in the fall as they prepare for the mating season and the lean winter months. Squirrels will construct their nests somewhere within their territory and close to the food caches.

They prefer to inhabit the natural hollows and cavities of trees, but if these are not available, then they will usually build a nest in branches, underground burrows, and even human homes and buildings. They are very discriminating in their choice of homes. Tree diameter, the structure of the branch, and the existence of escape routes are all factored in. The nests will be lined with grasses, moss, feathers, leaves, and even fur.

In order to communicate, the red squirrel makes a cacophony of different chirping, growling, screeching, and buzzing sounds. Most of these sounds serve as a warning against predators, threats, or anything else that encroaches on its territory. The sounds also help aggressive males drive off reproductive competitors in the breeding season.

A scent-marking will be the first sign that the squirrel is intruding on someone else’s territory. This will usually be enough to drive away intruders and prevent unnecessary conflicts. But if these incursions persist, then a fight may break out among the squirrels.

The red squirrel can be found almost anywhere in Canada and the United States (including Alaska) with plenty of coniferous tree cover. This means it’s much less common in the Great Plains states, the southeastern US, and parts of the Pacific coast. It seems to prefer a habitat of mixed hardwood-conifer forests with spruce, pine, hemlock, or fir trees up to an elevation of 2,500 feet.

Many red squirrels will die to predation and natural attrition every year, but this species does not face any significant threats in the wild. Habitat loss is generally not a problem on the whole. While squirrels may lose some territory to logging and development, the amount of tree cover has remained steady in the United States. Perhaps the biggest problem is that red squirrels are sometimes outcompeted for resources, especially by their larger and bulkier grey cousins.

What eats the red squirrel?

The red squirrel is preyed upon by weasels, martens, minks, foxes, lynx, snakes, eagles, owls, and hawks. They’ve also been historically hunted by humans for food and for their fur.

What does the red squirrel eat?

The red squirrel primarily feeds on seeds and nuts. These highly opportunistic animals will supplement their diet with the occasional piece of fruit, mushrooms, tree sap, flowers, insects, or bird eggs. In order to draw out the tree sap, the squirrel will puncture the sap-carrying vessels and then harvest it later. But it will only resort to this if other food is not widely available. The green seeds of conifer trees appear to be the squirrel’s favorite type of food.

The red squirrel has one or two defined breeding seasons per year that usually last between March and May and again between August and September. Males compete against each other quite aggressively to acquire the most mates. Individual pair bonding is rare. The female may only be in estrus (meaning sexually available) for one day every breeding season. In this short window, the males will spend their energy pursuing the female and driving off other competitors.

After a pregnancy period lasting about a month, the female gives birth to an average of four (though as many as eight) young at a time. These baby pups are born completely helpless and without much fur. The mother bears sole responsibility for raising the young, while the male usually returns to his own territory and has no other contact with the mate and the offspring.

Lactation occurs within the first 70 days of birth. After each baby is weaned off the milk, the pups are expected to become fully independent. Sometimes, when the mother is ailing, the newly mature squirrel may receive some pieces of her territory, like the heirs to an estate. This will greatly increase their odds of survival.

Red squirrels have a very high birth rate, probably because they also have a very high youth mortality rate as a baby due to predation, lack of food, and harsh environmental conditions. Only about a quarter of them will survive their first year of life. If they do grow out of the juvenile phase, however, they will have a lifespan of about five years. The oldest squirrel on record lived about 10 years in the wild.

The American red squirrel is currently classified as a species of least concern by the IUCN Red List. While population numbers are not well-known, this species probably numbers in the millions. However, this obscures some variability in the population numbers of some local subspecies. The Mount Graham red squirrel of Arizona, for instance, is known to be endangered with only a few hundred individuals remaining in the wild.

No, the red squirrel is a species of least concern – the best possible classification. However, some individual subspecies may be endangered.

Where do red squirrels live?

The American red squirrel can be found in hardwood or coniferous tree cover all over the United States and Canada.

How rare is a red squirrel?

The red squirrel is one of the most common mammals in North America.

Is the red squirrel extinct?

No, red squirrels are still thriving just about everywhere they can be found.

Grey squirrels do not usually kill red squirrels directly, but they will sometimes out-compete red squirrels for resources or even pass on dangerous viruses and pathogens.

Why are red squirrels bad?

Red squirrels aren’t really bad, but they can sometimes have a negative impact on the local ecosystem by stripping off bark and flowers from trees. This can prevent trees from fully growing properly. The squirrels can also cause property damage with their very sharp teeth and claws. While this behavior can be very annoying to people, they do this to sharpen their incisors.

What do red squirrels eat?

The red squirrel mostly consumes nuts and seeds. This is supplemented with fruit, mushrooms, flowers, sap, insects, and bird eggs.

How did the red squirrel evolve? 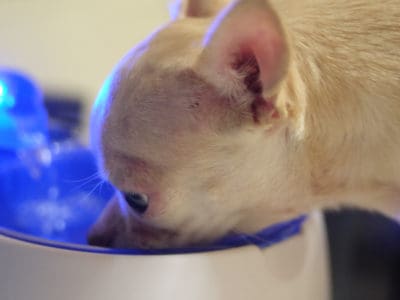 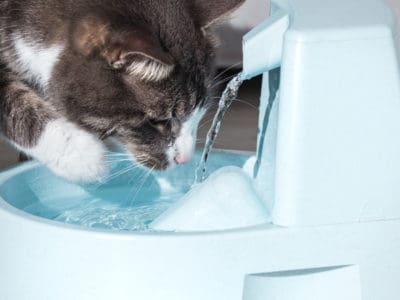 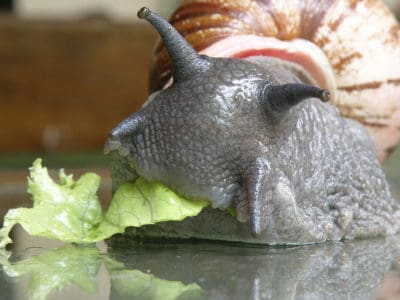