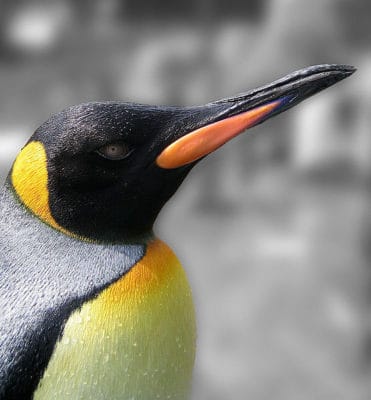 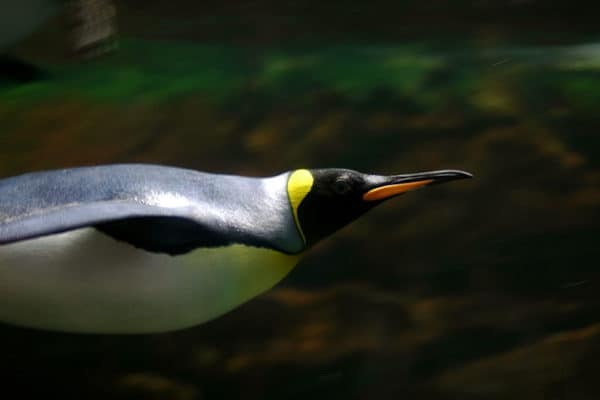 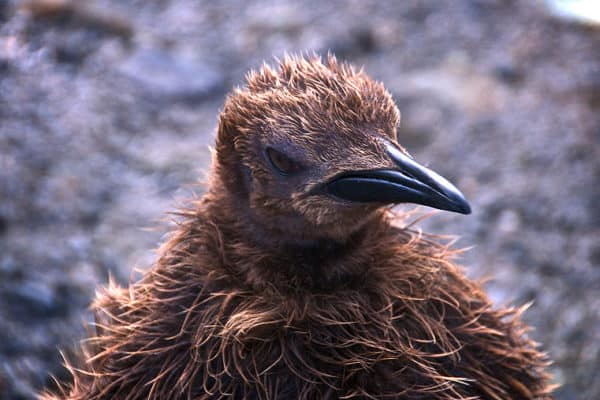 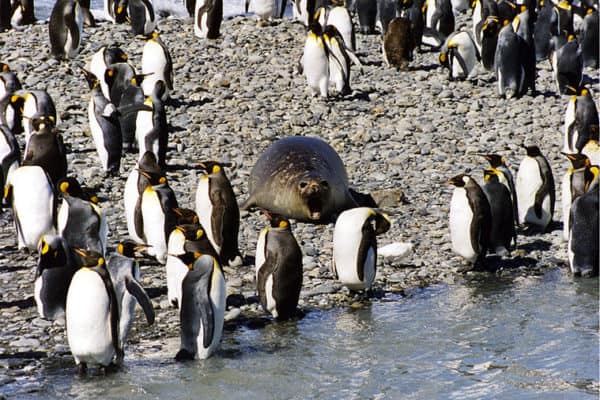 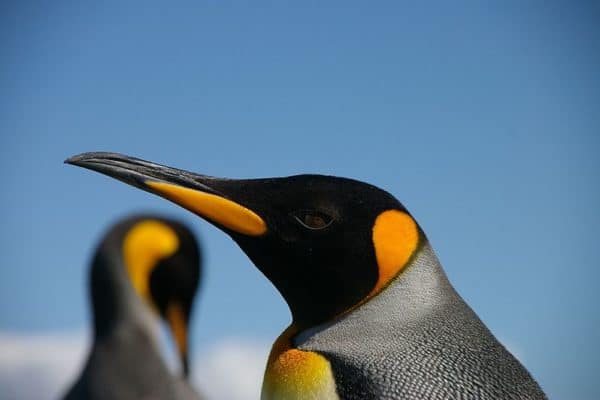 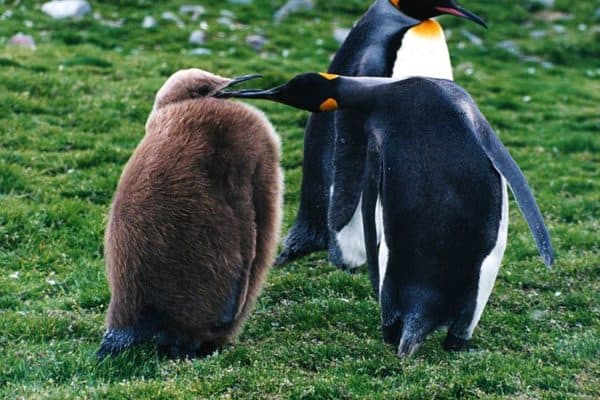 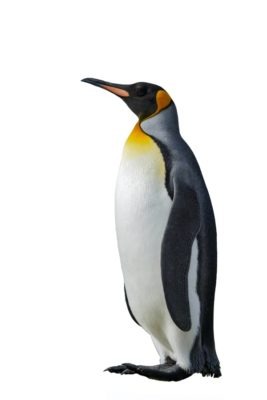 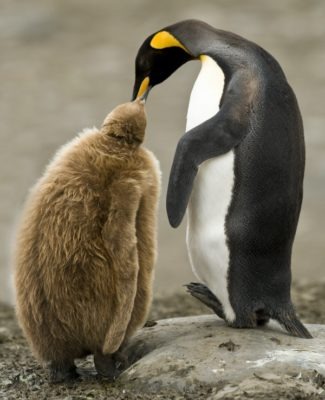 “The king penguin is second in size only to the emperor penguin.”

Standing as tall as the average toddler, the king penguin is large for its species. Only the emperor penguin is larger. Taxonomy places both the king and emperor penguins in the Aptenodytes genus. Both are experts in the water and can dive to great depths. King penguins hunt for lanternfish, krill, and crustaceans for themselves and to feed to their young. King penguin chicks look very different from the adults, with their brown downy feathers. The babies can take more than a year to become independent.

Taxonomy places the king penguin into the Spheniscidae family with all other penguins, but just emperor and king penguins have a separate genus: Aptenodytes, which is Greek for “featherless diver.” These two birds are bigger than all other penguins; have a long, thin bill and bright colors; dive deeper and longer than others; and are the only two who lay one egg and use their feet in place of a nest for that egg. The scientific name for the king penguin is Aptenodytes Patagonicus. While most of these creatures live in sub-arctic regions, fossils place them in the Patagonia region at least 6,000 years ago, hence the second part of their scientific name.

This animal’s common name came from European explorers in the beginning of the 18th century, who thought that they were the biggest penguins. It was not until Captain Cook’s second voyage that the explorers found the larger emperor penguin.

The king penguin is the second largest penguin. The average adult is 35 pounds, with males being slightly heavier than females. They are, on average, 3.1 feet tall, or about the size of a typical human toddler.

These creatures are adapted for arctic climates, keeping warm with four layers of feathers — 70 are in just a square inch of skin! The three layers closest to the body are down feathers, while the layer on the outside is oiled for waterproofing. A baby, however, is not waterproof. Therefore, they do not enter the water until their downy brown feathers turn to the adult black and white ones.

King penguins have black heads with distinguishing orange plumage at the ear and throat. The plumage fades to yellow as it nears the chest, which is white. This two-toned coloration camouflages them from both predators and prey in the water. White bellies blend with the sunny surface when a creature views the penguin from below. From above, the black helps the penguin blend with the dark sea bottom. They have thick, black legs to hold their eggs and young chicks, and their beak, which has orange on each side, is longer than any other penguin species.

These birds are highly social creatures. Although they share space with penguin species such as the Gentoo, Magellan, and Royal, they do not interact with them. Adults often fight with each other, the most dominant of which make their way to the center of their huddles. They are extremely curious with humans, and they will come up to visitors to investigate. Their colonies can have tens or even hundreds of thousands of breeding pairs. The size of the colonies helps them huddle for warmth. Chicks also form groups called communal crèches. While adults leave to forage, when mates or parents return, these creatures recognize one another through unique vocalizations.

King penguins prefer to walk or toboggan versus hop. They are expert swimmers and cruise at speeds between 3 and 6 miles per hour. Records have found them as far as 1,200 miles away and 1,000 feet deep when hunting food.

These creatures thrive in sub-antarctic islands. Although they had almost disappeared from the area, they are now increasing in the Patagonia region. Scientists have also spotted them in South Africa and even Staten Island in New York! A. patagonicus is the subspecies that inhabits South Georgia, the Falkland Islands, and southern Chile. A. patagonia halli is the subspecies that lives in the Kerguelen Islands, Prince Edward Island, Crozet Islands, McDonald Islands, Heard Island, and Macquarie Island.

Unlike emperor penguins, king penguins remain farther north in less hostile climates. Temperatures can reach 50 degrees Fahrenheit during warmer months. They tend to choose flat green or rocky beaches that are not covered with snow and ice. Optimal locations offer wind protection through surrounding snowy mountains. They dive to great depths to hunt during the day but stay in the shallow waters in the dark. The birds will move inland during mating season.

This species faced threats to its population in the 19th and 20th centuries. As seals were hunted for fur, the possibility of exploiting penguins for oil was realize, and some populations were almost wiped out. Today, however, the king penguin population is in the Least Concern category. Current estimates show there are 2.23 million breeding pairs, and this number is increasing.

These birds hunt in colonies. Their high energy usage requires large amounts of food for their size as they routinely dive to the ocean floor as many as 100 times in a single day! That is where they find lanternfish as well as other kinds of fish, squid, small crustaceans, and krill. Adults will consume as many as 450 fish in a day, and they feed their young by regurgitating their food. During these periods, an adult will eat 8 pounds of food a day! That’s equivalent to the average grown man eating 25 large pizzas! Chicks are born with reserves of body fat that help them to endure up to a 70% weight loss, allowing them to survive for at least three months while waiting for adults to find and deliver food.

The king penguin reaches depths of about 54-110 yards when hunting its prey, but they have been known to go as deep as 328 yards. They can stay underwater for almost 10 minutes. A capillary gland above their eyes filters out salt, which allows them to be able to consume ocean water. This is useful since fresh water sources can be frozen.

King penguins are in the category of Least Concerned. Their habitats are cold enough to be sparsely populated, which means there is little human impact on their population. They have a varied diet, so overfishing of things like krill and climate change will not be detrimental to their diet. Global warming, however, does appear to affect successful breeding. In spite of global warming, though, king penguin populations are increasing.

These creatures are not a main food source for any animal, but they do have some predators. Adult threats are marine animals since the penguin habitat is harsh for land animals. Leopard seals and orcas are the biggest threats to adults as they prey in the water.

Birds such as skuas, sheathbills, southern black-backed gulls, and giant petrels are strong enough to grasp eggs and young penguins on land who are left unattended by adults.

King penguins become sexually mature around the age of three years, but they likely will wait until six years to begin breeding. Mating season is marked by a molt during September, October, or November. Those who are molting or roosting instead of breeding are segregated from others who are breeding. Molting king penguins move inland and stay out of the water until new waterproof feathers grow. This lasts approximately three weeks during which they survive on stored body fat. When ready to mate, male king penguins spend anywhere from a few hours to a few days lifting their heads high, calling, and holding their flippers out to attract a mate. A match is successful when both birds shake their heads at the same time.

King penguins only breed twice within three years. King penguins and emperor penguins are the only penguins that do not nest. Rather, king penguins lay one pale green egg between November and April and incubate it with a warm fold of skin that hangs over their webbed feet on which the egg rests. The egg hatches after approximately 54 days. The baby is naked at birth and must remain under a parent’s warm skin for another 39 days. Males and females take turns between protecting the baby and hunting. Chicks gather in a group called a crèche for another nine months, making it harder for predators to single out one baby. The chick rely on regurgitated food from adults.

While other penguin babies go from egg to swimming in one summer and hunt regardless of food availability, king penguin newborns require a plentiful hunting season. Since this takes over a year, that leaves king penguin colonies inhabited year-round.

On average, king penguins can live up to 25 years in the wild and 30 years in captivity. Some ages of those in zoos are unknown because they were born elsewhere, but zookeepers estimate some to be at least in their mid-30s.

King Penguins In the Zoo

Visitors can view king penguins at a few zoos in the United States, Australia, and the United Kingdom. These include:

View all 12 animals that start with K

What is the difference between a king penguin vs an emperor penguin?

Where does a king penguin live?

The king penguin lives on subantarctic islands and Patagonia. Some have even been spotted at Stated Island! King penguins do not live on lands completely covered by ice. Instead, they choose green or rocky flat coasts.

King penguins are approximately 3.1 feet tall and 35 pounds. They have the typical black back and white belly of other penguins, but also unique orange patches at the ear and throat which fades to a yellow as it gets closer to the chest. They have the longest beak of all penguins. It is black with orange on both sides. Chicks are brown, downy birds that look very different from their parents. There is no orange on baby chicks’ beaks until they are older.