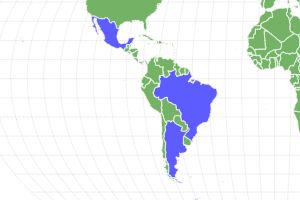 View all of our King Vulture pictures in the gallery.

View all of the King Vulture images!

The king vulture is among the largest land-based birds in the world.

This bird can be seen soaring far above the lowlands of Central and South America in search of dead prey. Their enormous wingspan and broad chest are impressive sights against the backdrop of the sky. Given their size, the name is an accurate description. They truly are king of the vultures. This article will cover some interesting facts about the size, geographical range, and diet of the king vulture.

Where to Find the King Vulture

The king vulture can be found in lowland forests, savannas, and grasslands throughout southern Mexico, Central America, and down through South America to Argentina and Brazil. They do not typically occupy large mountainous regions such as the Andes. The home territorial range of an individual bird is not known, but it is probably quite large.

The king vultures do not build artificial nests at all. Instead, they lay their eggs in the hollow cavities of logs, stumps, and trees with very little material added.

The scientific name of the king vulture is Sarcoramphus papa. The genus combines together two ancient Greek words: sarx means flesh and rhamphos means crooked beak. This refers to the fleshy skin along the beak. The species name papa is Latin for bishop. This refers to the bird’s interesting black and white plumage. The king vulture is the only surviving member of its genus, but a few more species are known from the fossil record. They are a member of the New World vulture family.

The king vulture is among the largest birds of the Americas, measuring some 2.5 feet tall and a wingspan of around 6 to 7 feet long. Their broad chest and long wings have white plumage and black tips, giving them the appearance of a bishop’s cloak. Their bare head is marked by an interesting combination of red, orange, black, and yellow with a fleshy appendage arranged around the large, hooked beak. They also have silver or white eyes and gray feet. Males and females are almost impossible to distinguish from each other by appearance alone.

King vultures are mostly solitary hunters that stick to small family units and do not form large groups. Although they lack a voice box, they do make low croaking sounds and warning calls, especially when a predator approaches their territory. They spend much of the day sitting atop the canopy or soaring above the ground in search of food. They tend to remain within the same place for almost the entire year and do not migrate at all.

King vultures are considered to be scavengers. Without a good sense of smell, they mostly use their well-developed vision to find dead carcasses and feed on them. However, they will often rely on other types of vultures to locate food for them.

What does the king vulture eat?

King vultures feed almost exclusively on carrion. They do not hunt for and kill other animals, even when it’s sick and dying. Their large, sharp beak is nevertheless capable of ripping through tough hide and flesh when the animal has expired. Smaller vultures rely on them to tear up the food.

The king vulture does not appear to be seriously threatened in any manner. The IUCN Red List currently ranks it as a species of least concern. However, habitat loss may have some negative impact on this species, causing populations to decline.

What eats the king vulture?

King vultures are sometimes preyed upon by snakes and big cats such as jaguars. The size of the adult affords it some protection against all but the largest predators. Juveniles are more vulnerable, especially when they wander away from the nesting site.

These vultures are thought to be monogamous birds that spend most of their lives with a single partner. Their mating ritual is quite elaborate and involves many loud wheezing and snorting sounds. They will mate with their long-term partner in the dry season and then produce a single egg at a time. After about 50 to 60 days, the baby will hatch with some downy feathers. If the baby is soon lost, then the parents may replace it with another one within a few weeks.

Since the baby is born immature, both of the parents take turns with the incubation duties, feeding, and defense of the young. These vultures have a specialized organ that allows them to carry food in the gut. When they return to the nesting area, they will regurgitate the food from the beak into the baby’s mouth. When the chick grows older, the parents will start to place the food on the ground for it to feed on.

There are some basic facts we still don’t understand about their development, but it’s thought that they acquire their adult plumage after several months and become fully mature at around four years. They remain with their parents for most of that time while learning to hunt and fly. The lifespan in captivity is thought to be around 40 years old.

It is not known exactly how many of these birds exist in the wild. Some population estimates have placed the number as high as 50,000 and some under 10,000. However, the numbers do appear to be decreasing throughout most of its range due to human encroachment and interference.

Does the king vulture migrate?

The king vulture does not migrate. It has a defined territory that is maintained throughout the entire year.

How many eggs does the king vulture lay?

The female vulture only lays one egg at a time. This may be due to the fact that the young require a lot of investment to grow. It may be why the parents are monogamous as well. They cannot afford to break up as the chick develops.

How fast does the king vulture fly?

The top speed for this species is unknown, but some other types of vultures can cruise around at 20 to 30 miles per hour.

What is the king vulture’s wingspan?

This species has a wingspan of around 6 to 7 feet long.

When do king vultures leave the nest?

They start to leave the nest after several months, but the exact timeframe is uncertain.

How big are king vultures?

King vultures stand about 2.5 feet tall and weigh up to 8 pounds. They have broad chests and square tail feathers. They are the largest New World vultures except for the condors.

Why is the king vulture important?

King vultures quickly clean up dead, rotting carcasses from the environment, which may reduce potential sources of diseases. In fact, vultures may have very strong immune systems that allow them to tolerate diseases from the dead carcasses.

Nope, it is still considered to be a fairly widespread species.

What does the king vulture eat?

What is the lifespan of a king vulture?

The king vulture is thought to have a lifespan of around 40 years in captivity.