Click through all of our Lungfish images in the gallery. 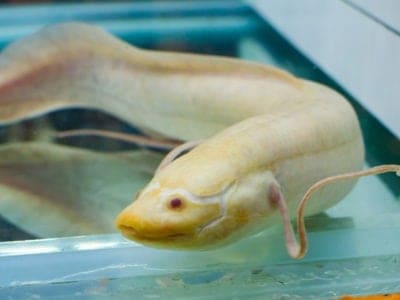 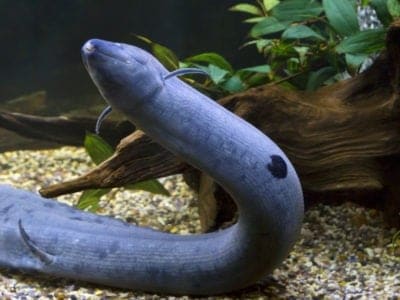 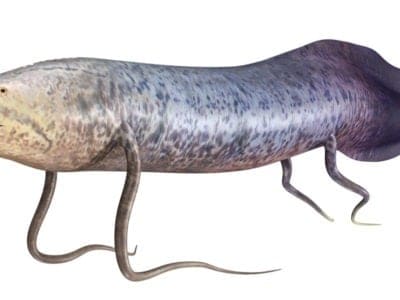 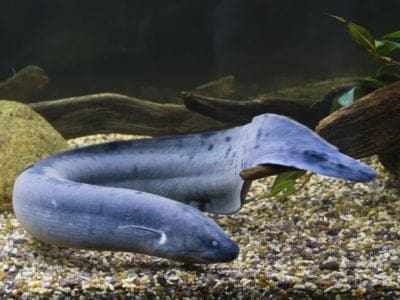 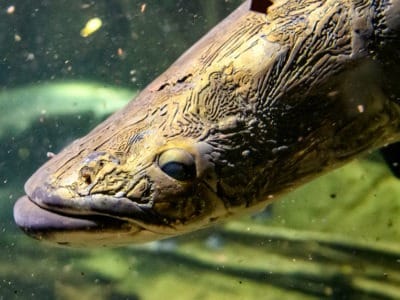 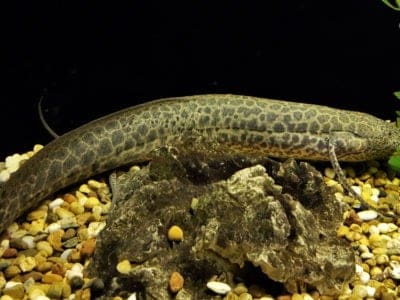 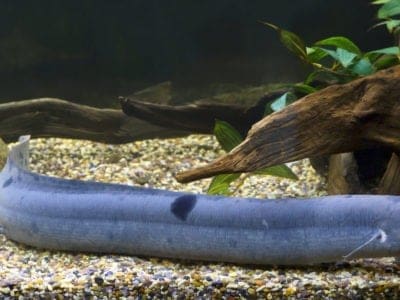 View all of the Lungfish images!

The modern lungfish is the product of an ancient lineage that dates back almost 400 million years. This “living fossil” is sometimes called primitive, but that does not mean its features are undeveloped, just that it has changed very little since first evolving. The most interesting characteristic of the lungfish is the presence of the internal lung, which serves multiple purposes. Like the swim bladder in other fish, the lung provides buoyancy while swimming, but it also absorbs oxygen and removes waste.

The scientific name for the order is Dipnoi, a Latin term meaning roughly that it has two organs for breathing. The closest living relative of this creature is probably the ocean-based coelacanth, which was rediscovered in 1938. Both types of fish have changed little since evolving some 400 million years ago.

There are currently six species currently alive today. The four African lungfish all occupy a single genus, while the South American and Australian species both occupy their own genera.

This is a type of lobe-fished fish whose dominant characteristic is the presence of a complex bone and muscular structure in the fins. It comes in a variety of different colors, body shapes, and sizes. The marbled lungfish is the largest currently living member of this order. It reaches up to a length 7 feet and weighs almost 40 pounds, but even an average species grows to 4 feet and weighs up to 22 pounds. Most species have very poor vision (which can barely sense movement), but they compensate with their superior sense of touch, smell, and taste. Organs on the snout can also sense weak electrical fields. It has been suggested that the lungfish has changed very little over millions of years because of its stable environment and lack of real predators.

This fish has a rather large and discontinuous range all over the tropical parts of the world. Four of the six species reside in Africa, while another species is endemic to Queensland, Australia. The only species in the Western Hemisphere resides in a small part of the Amazon basin near Paraguay. All of them are highly adapted for freshwater lakes, rivers, streams, and wetlands.

This fish was quite common all over the world until about 200 million years ago, when their numbers began to decrease. Most of the remaining species alive today are in no danger of extinction. According to the IUCN Red List, the four African species are currently classified as least concern, while only the Queensland lungfish is endangered. The South American lungfish is not categorized, since little is known about it.

This fish is an apex predator in its native freshwater habitat. Almost nothing else grows large enough to eat it.

What does the lungfish eat?

This creature’s diet consists of worms, crustaceans, insects, amphibians, plants, and even other lungfish. When opening its mouth, this animal sucks in prey and crushes them in its teeth. Although they will consume almost anything, some species can go years without eating.

What eats the lungfish?

An adult has no known natural predators, but the juveniles may fall prey to fish and mammals.

This creature’s reproductive strategies vary by region and genus. Both the South American and Queensland lungfishes are different from the African lungfishes and each other.

The African lungfish spawns at the beginning of the rainy season at the end of winter. The larvae then emerge after about a week with bright red fan-like external gills to help them breath until their lungs are fully developed. The male protects the young in his nest until they are ready to gain their independence.

The South American lungfish builds an even more elaborate nest consisting of a single vertical passage and a horizontal chamber at the bottom. The male, who guards the nest with his life, develops little tufts in the spawning season that release oxygen into the water to help the larvae breathe in their first few days of life before they can develop lungs.

The Australian lungfish doesn’t create burrow at all. Instead, it lays the legs among plants. The larvae, like the adults, have internal gills to breathe on their own.

Regardless of species, the lungfish is an especially long-lived fish. It is estimated that some species have a lifespan of 100 years. A Queensland lungfish named Granddad, which lived at the Shedd Aquarium in Chicago, was acquired in 1933 and was only euthanized in 2017 due to declining health. He was seen by more than 100 million guests in his lifetime.

Lungfish in Fishing and Cooking

The lungfish is almost never used in human cuisine except as a local African delicacy where it’s particularly abundant.

What do lungfish eat?

The lungfish diet consists of worms, crustaceans, insects, amphibians, plants, and other lungfish.

How do lungfish breathe?

The lungfish breathes almost exclusively through its lungs. These organs are connected to a large tract that is covered in small blood vessels. Since the gills are poorly developed, most species of lungfish must return to the surface to breathe. The African lungfish needs to surface every 30 minutes on average. The Australian lungfish, which also relies on its gills to breathe, only needs to surface every 40 to 50 minutes.

How long can a lungfish live out of water?

By secreting a mucous, the lungfish can survive more than a year out of water. Otherwise, it would dry out.

Lungfish can be a little aggressive in their search for prey, but they aren’t aggressive toward humans.

Can lungfish be eaten?

Yes, but they are almost never caught for commercial purposes.

What Kingdom do Lungfish belong to?

Lungfish belong to the Kingdom Animalia.

What phylum do Lungfish belong to?

Lungfish belong to the phylum Chordata.

What class do Lungfish belong to?

Lungfish belong to the class Sarcopterygii.

What order to Lungfish belong to?

What type of covering do Lungfish have?

Lungfish are covered in Scales.

In what type of habitat do Lungfish live?

What are some predators of Lungfish?

Predators of Lungfish include humans.

What is the scientific name for the Lungfish?

The scientific name for the Lungfish is Dipnoi.

How do Lungfish have babies?