Females lay up to 5 million eggs at one time in warm, shallow and salty waters

Click through all of our Milkfish images in the gallery. 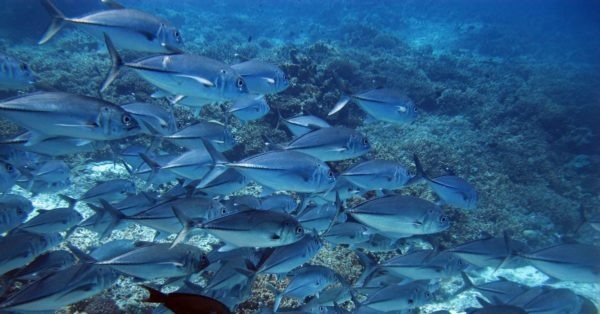 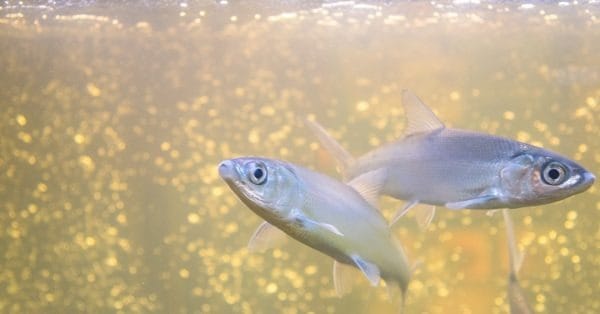 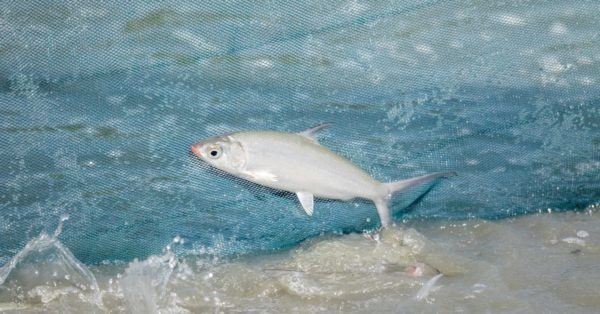 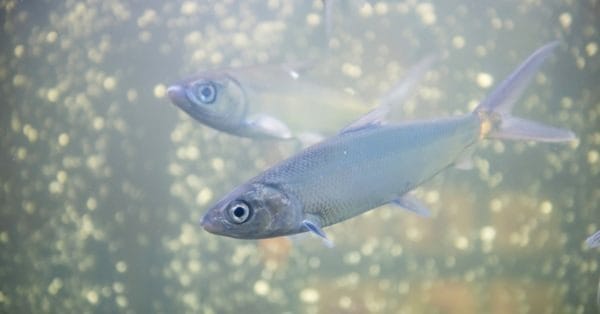 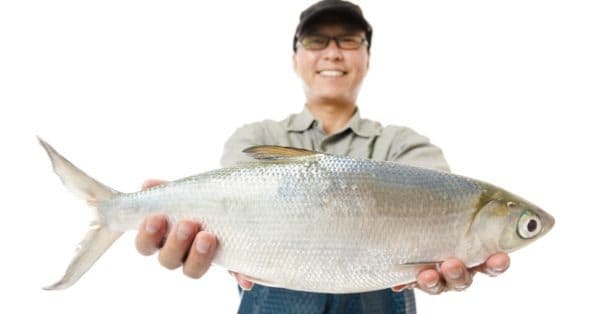 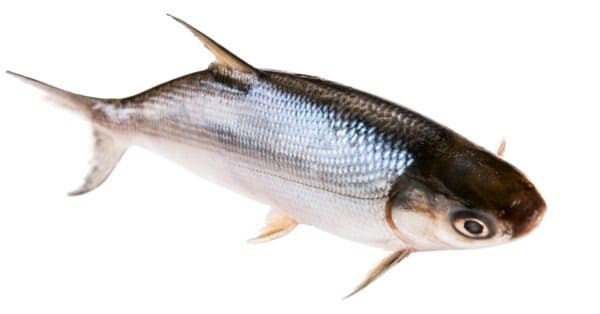 View all of the Milkfish images!

Milkfish, whose other names include Bandeng and Bangos, are the last remaining living species of the Chanidae family.

Five other previous genera are now extinct. This group of fish dates all the way back to the Early Cretaceous period in Earth’s history. It has roamed the warm, tropical waters of what are now the Indian and Pacific Oceans for more than 140 million years.

The milkfish’s characteristics include a blue top with silvery sides and a white bottom that shimmers in the water. Its other distinctive characteristic is its wide and deeply forked tail. These creatures often reach lengths up to six feet and weigh between 17 and 35 pounds.

This fish is popular in Asia for its white and tender flesh and is a key source of nutrition. As a result, Taiwan, Indonesia, and the Philippines have been breeding and raising these fish for more than 500 years. As a result, the milkfish is not at risk of becoming endangered currently.

Today’s milkfish is the last surviving member of the Chanidae family. It belongs to the Chanos genus and its scientific name is Chanos chanos.

Over the millennia since the milkfish’s ancestors first appeared 140 million years ago, there have been five other genera of species in the Chanidae family. These extinct genera include

All the Chanidae fish species, including the milkfish, are bonier and thornier than many other present-day fish species.

There are only one living species of milkfish in the world today. This creature is known as Chanos chanos. It resides in tropical regions within the Indian and Pacific Oceans. Its other common names include Bandeng and Bangos.

The milkfish’s key characteristics include a lustrous blue and silver color that is distinct from many other fish. They also have a prominent fork in their tail and a muscular body. They can reach six feet and weigh 35 pounds or more when fully grown.

These fish have no teeth, which means they live on plants and other soft invertebrates near the shore where they make their habitats. Interestingly, they do not have pronounced sex organs, which means it can be difficult to identify male and female specimens in the wild.

These creatures prefer warm, tropical waters that are more than 85 degrees Fahrenheit. As a result, they are almost always found in the Indian and Pacific Oceans near islands or coral reefs.

They are frequently observed in the wild around Hawaii, the Pacific Islands, Indonesia, Taiwan, and Vietnam. They prefer shallow water and normally swim in schools between one and 100 meters from the water’s surface.

As adults, they also seek out fresh ponds, estuaries or rivers with good sources of algae as their ideal habitat. However, they need to spawn in salty water and the young milkfish, referred to as fries, swim out into saltwater where zooplankton is more plentiful.

Bangos are most vulnerable when they are in the egg, larvae or fry (i.e., juvenile) development stage. Its most common predator is the Tarpon, a large carnivorous fish species also common in Indo-Pacific waters.

Ladyfish, also known as Tenpounders, are another species known to prey upon the young bandeng. However, Tenpounders normally only reach three feet long and a maximum weight of 20 pounds. As a result, they are not a threat to more mature milkfish.

Milkfish need brackish, i.e., salty, water for reproduction and spawning. Females typically release up to five million eggs at night during the warm months but can occur throughout the year.

Larvae hatch near coral reefs or other protected areas and then drift out to sea. The ocean saltwater is rich with zooplankton and other microscopic organisms that the young fish need to grow and survive. As they mature over the next two to four weeks, these creatures gradually swim back towards the warm waters near the shore or to lakes, estuaries, rivers or other freshwater sources.

Milkfish in Fishing and Cooking

Milkfish is an extremely popular ingredient in Asian recipes due to its mild taste. It is high in omega-3 fatty acids that are important for human heart health. It also has tender, white flesh that can be pan-seared, sauteed or made into fish balls. People in the Philippines eat more than 250,000 pounds of milkfish every year.

Asian countries have been farming and raising this species for more than five centuries. Today, Asian countries and other island nations produce more than 1 million pounds of this fish per year.

The milkfish population is stable and of least concern as far as potential for becoming endangered. Farms around Taiwan, Indonesia, and other Asian countries have been raising milkfish for more than five centuries.

Today, there are sophisticated processes in place to ensure that only mature milkfish that are consistent sizes are harvested. There are also established protocols to treat parasite infestations and nematode outbreaks amongst the breeding stock.

As of 2016, the global production of milkfish referred to as aquaculture surpassed more than 1.1 million tons of fish. Demand for this fish is only expected to increase as the populations of the Philippines and other island nations grow.

View all 45 animals that start with M

What is a Milkfish?

A milkfish is the last living species of the Chanidae family of fish. The other specimens from this fish family are now extinct.

The Bangos’ main characteristics are a silvery-blue coloring with a shimmering white belly and a wide-forked tail. It can grow to five or six feet in length. Typical weights for this fish are between 17 and 30 pounds.

This fish lives in the tropical waters of the Indian and Pacific Oceans and is extremely popular in the Philippines and other countries in Asia. They are also common in dishes from the Pacific Islands, Hawaii, and Japan.

Are milkfish good to eat?

Yes! Milkfish is a good source of nutrition. including omega-3 fatty acids. These nutrients are essential for heart health in humans. These fish are bonier than some other species that are common for food. However, its tender meat and relatively inexpensive price make this fish a popular choice in Indonesia, the Philippines, Hawaii, Japan, and other island nations.

Milkfish can be pan-fried, braised, or used as an ingredient in fish balls. It is the most used fish in Taiwanese seafood dishes. Many traditional recipes use this fish’s meat as a topping for a rice porridge known as congee due to its mild taste.

Are milkfish saltwater or freshwater fish?

Milkfish primarily like to swim in the warm tropical waters around islands and coral reefs. They have also been known to spawn in brackish waters near the shore or to swim up into rivers and freshwater ponds.

However, young milkfish, called fries, do swim out into the ocean to mature. While in saltwater, these juvenile fish like to eat zooplankton, small eggs, and other microscopic organisms. As they get bigger, milkfish swim back closer to shore and begin to eat algae and other plants.

Why are they called milkfish?

These fish have white, flaky flesh that is tender when cooked. After being steamed, pan-fried, or seared, the meat has a color closely resembling milk. As a result, locals began to call these creatures milkfish.

What do milkfish eat?

Milkfish are herbivores, which means that they primarily subsist on plants, algae, and other vegetation near the shore. As young fries, these fish do eat zooplankton, which includes the eggs of other fish.

These plankton provide essential nutrition that the juveniles need to grow and to be able to swim back to the warm, shallow waters near the Pacific Islands, Asia, Hawaii, and other tropical areas.

What Kingdom do Milkfish belong to?

Milkfish belong to the Kingdom Animalia.

What phylum do Milkfish belong to?

What class do Milkfish belong to?

Milkfish belong to the class Actinopterygii.

What family do Milkfish belong to?

Milkfish belong to the family Chanidae.

What order to Milkfish belong to?

What type of covering do Milkfish have?

Milkfish are covered in Scales.

What type of covering do Milkfish have?

Milkfish are covered in Scales.

In what type of habitat do Milkfish live?

What are some predators of Milkfish?

Predators of Milkfish include Indo-Pacific tarpons and tenpounders.