Click through all of our Tarpon images in the gallery. 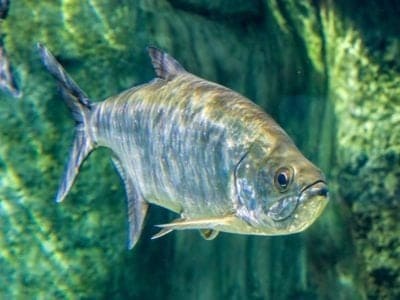 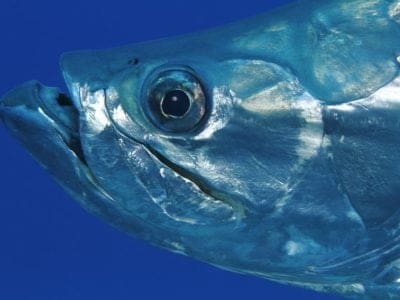 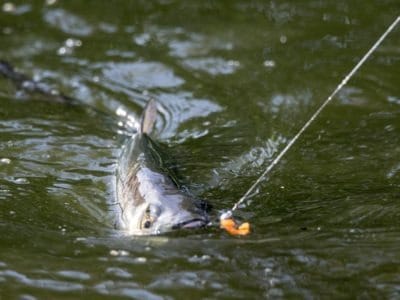 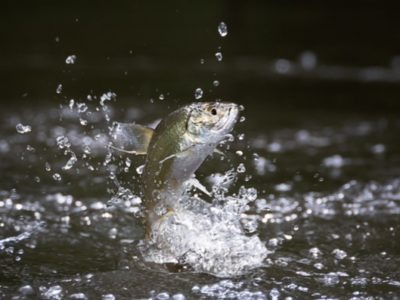 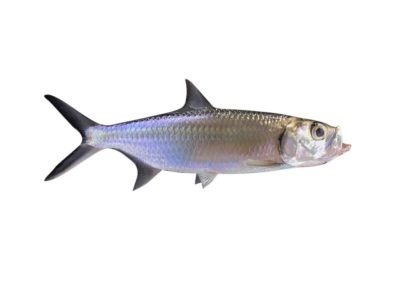 View all of the Tarpon images!

The Tarpon is a popular game fish that is prized not for its flesh but for its vigor upon being captured.

The tarpon fish, also known as the silver king, silverfish, silver sides, and sabalo, is a versatile fish that lives mostly in oceans but also in freshwater areas, including rivers and marshes. Consisting of two species, the Atlantic tarpon, and the Pacific tarpon, it is a popular game fish that is prized not for its flesh but for its vigor upon being captured. Protected by extensive regulations, the tarpon fish is classified as Vulnerable by the IUCN.

These fish belong to the order Elopiformes, which also includes ladyfish. They belong to the family Megalopidae and the genus Megalops. The genus consists of two species with the following scientific names: the Atlantic tarpon, Megalops atlanticus, and the Pacific tarpon, M. cyprinoides.

This fish has many alternative names, but the best-known of them is “silver king,” which refers to the bright flash that they make when their silvery scales reflect the sunlight as they are fighting on the end of a fishing line. Other nicknames for tarpon include silver sides, grand ecaille and sabalo real.

There are only two species of tarpon; both belong to the genus Megalops.

This popular gamefish grows to an average size of about six feet long and roughly 100 pounds. The largest recorded catch, the current IGFA world record, was for an Atlantic tarpon weighing 286 pounds, 9 ounces. From above, the fish may appear to be dark-blue, greenish-black, or even brassy in color. Large scales coat their sides, and they feature a bright, shiny color that makes the fish flash and shine in the sunlight.

Related to bonefish and ladyfish, these fish have a long body with large pelvic fins and long pectoral fins. A long, bony plate extends along its upturned lower jaw, allowing it to crush prey when necessary. Its mouth is filled with fine, densely packed teeth that aren’t very sharp. Since their teeth aren’t great for tearing or chewing, tarpons generally swallow their prey whole when feeding.

Populations of tarpons are widely fragmented, making it difficult to arrive at accurate estimates. The Atlantic tarpon is mostly found inshore in warm areas of the Atlantic Ocean, including the Eastern Atlantic from Senegal to the Congo and the Western Atlantic in the Gulf of Mexico, around the Florida Keys, and around the West Indies. It is also found on the Pacific side of Central America and occasionally in rivers. The Pacific tarpon, meanwhile, is mostly found along the coastal waters of East Africa and the Arabian Peninsula through southern Australia, French Polynesia, South Asia, Southeast Asia, and southern Japan.

Both species primarily live in coastal waters, estuaries, bays, and mangrove lagoons within tropical, subtropical, and temperate areas. Amphidromous creatures, they travel from seas to rivers and from rivers to seas. Their modified air bladders allow them to tolerate oxygen-poor environments and various pH levels, and they can swim to depths of around 100 feet.

While still in the egg and larval stages, these fish are preyed on by zooplankton and various small fishes. As juveniles, they are hunted by piscivorous birds while developing in nursery areas. Adults are mostly hunted by large sharks, including hammerhead sharks and bull sharks, but they’re also preyed on occasionally by porpoises and even alligators.

What Does Tarpon Eat?

Immature fish are planktivorous, meaning that they feed mostly on zooplankton; they also prey on insects and small fish. Older juveniles mostly prey on fish and large invertebrates like crabs and shrimp. Adult fish are strict carnivores and mostly subsist off of mid-water prey, including pinfish, sardines, mullets, and marine catfishes.

It is believed that tarpons spawn primarily during the months of May, June, and July; however, there is some evidence that they may spawn year-round. These fish perform exhausting migrations to offshore spawning areas with warm waters, and ocean currents move the resulting larvae to inshore nurseries.

These fish reach sexual maturity at six to seven years of age, or when they reach a length of approximately 4 feet. Females have extremely high fecundity and are capable of laying upwards of 12 million eggs at one time. Stage-one larvae spend their time near the surface of clear, calm ocean waters. At stages two and three, larvae may progress into salt marshes and tidal pools before ascending into freshwater rivers and creeks. As they grow into adults, they typically return to open ocean areas; however, they also sometimes remain in freshwater areas.

Tarpon in Fishing and Cooking

The flesh of the tarpon is widely regarded as undesirable as it is largely filled with small bones and tends to have an unpleasant odor. However, the fish is sometimes consumed as a delicacy in places like Panama, Africa, and the West Indies.

Tarpons are popular gamefish. In places like Florida, they are commonly fished for sport rather than for food. Catching one of these fish is considered to be a major coup or even a rite of passage for sports fishermen because of the wild, thrashing fight that the fish gives upon being captured. With their ability to leap upwards of 10 feet into the air while rattling their gills, they are a sight to behold.

Strict regulations are in place concerning the fishing of tarpons. In most places, only hook-and-release fishing of tarpons is allowed. Starting in 1989, for example, a tag must be purchased to possess or kill tarpons in Florida. Currently, only one tag per fisherman per year is allowed, and fishermen must agree to provide the Florida Marine Research Institute with information about their catch, including the date and location of the catch and the length and weight of the fish.

The tarpon is also the largest species targeted by fly fishermen in shallow waters.

View all 48 animals that start with T

What do tarpons eat?

As larvae, tarpons subsist mostly off of zooplankton, insects, and small fish. Juveniles progress into eating larger fish and large invertebrates like crabs and shrimp. Adult tarpons mostly prey upon mid-water creatures like marine catfishes, mullets, sardines, and pinfish. They don’t use their teeth when feeding but usually swallow prey whole.

Is tarpon a good fish to eat?

Although tarpon is fun to catch, they are not considered to be worth eating. That’s mostly because their flesh is filled with tiny, difficult-to-clean bones, and it is also said to have an unpleasant odor.

Are tarpons dangerous to humans?

Generally speaking, tarpons are wary of humans and tend to spook easily. Occasionally, though, they cause accidental harm to humans; this usually happens when an angler is trying to release one. There are stories of fishermen being killed by thrashing tarpons, but no direct evidence of this exists.

How big do tarpons get?

Tarpons grow to an average size of roughly six feet long and approximately 100 pounds. The world record currently cited by IGFA is for a tarpon weighing 286 pounds, 9 ounces, so these fish can become quite massive.

Where are tarpons found?

Tarpons’ habitats vary by species. Atlantic tarpons are located in warm areas of the Atlantic Ocean. In the Eastern Atlantic, their range extends from Senegal to the Congo; in the Western Atlantic, they are found in the West Indies, around Florida, and in the Gulf of Mexico. Pacific tarpons are found in warm areas of the Pacific Ocean, including along the coasts of eastern Africa, the Arabian Peninsula, South Asia, Southeast Asia, south Japan, South Australia and French Polynesia.

What Kingdom do Tarpons belong to?

Tarpons belong to the Kingdom Animalia.

How do Tarpons have babies?