Click through all of our Numbat images in the gallery. 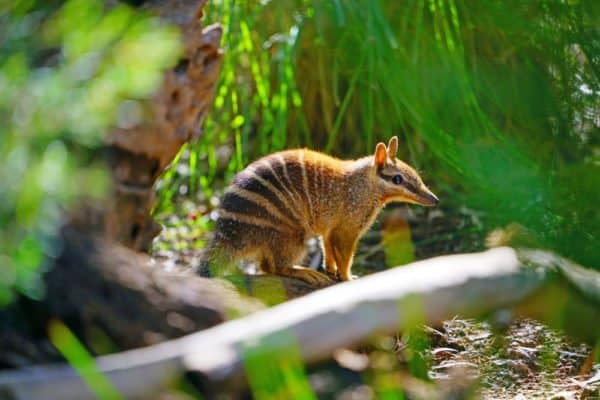 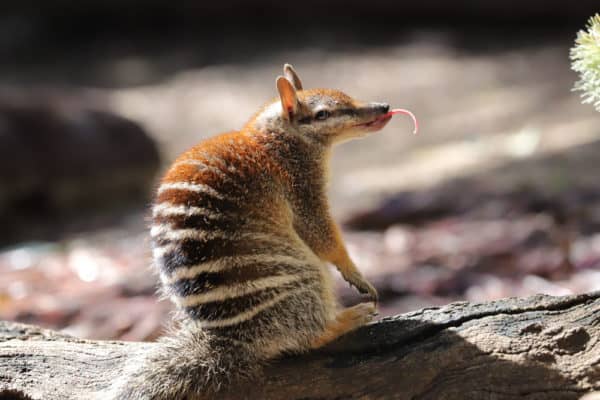 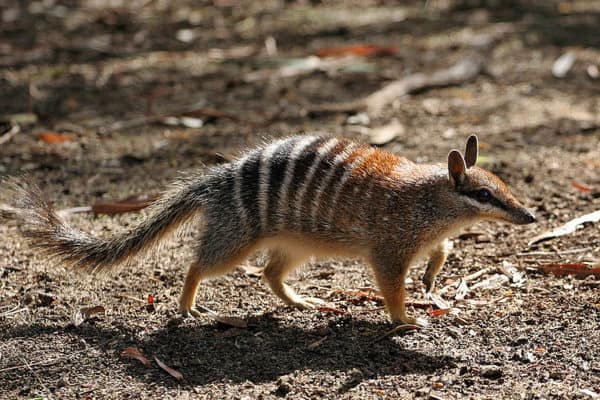 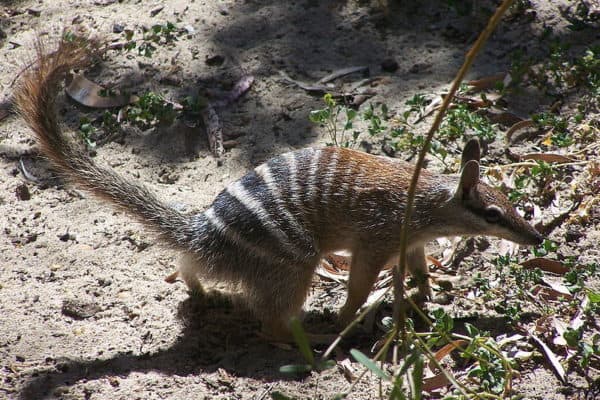 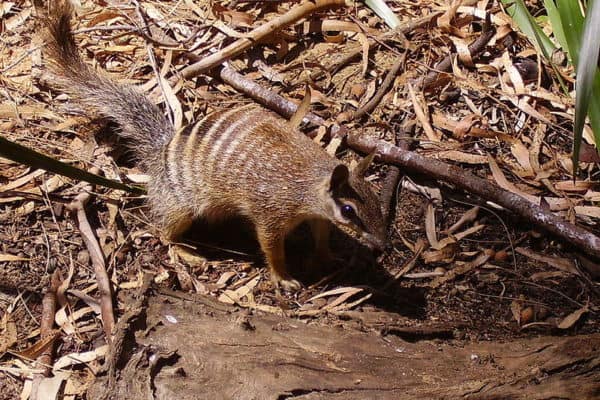 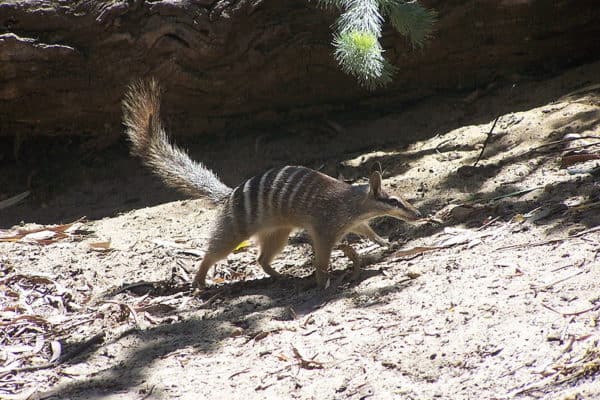 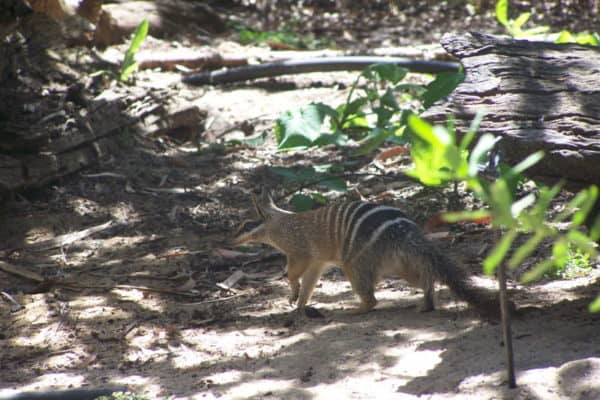 View all of the Numbat images!

A numbat is a marsupial that lives in western Australia. This small mammal uses its long, sticky tongue to capture termites that live underground. Numbats are animals that live in hollow logs and burrows. They hunt for termites by day and sleep at night. Today, fewer than 1,000 numbats live in the wild.

• Numbats only source of food is termines

• Numbats have dull, peg-like teeth because they don’t chew the termites before swallowing them

A numbat’s coat is a mixture of reddish brown with black and white stripes on its back and a small black stripe over each of its dark eyes. Its ears are thin and pointy. Its slim body is 7 to 12 inches long. A 12- inch long numbat is the same size as a standard ruler. A numbat’s bushy tail measures 4 to 8 inches long. Some people compare the appearance of a numbat’s tail to that of an Eastern gray squirrel. Adult male and female numbats weigh a little over one pound. Imagine two hamsters from the pet shop and you have the total weight of an adult numbat. Because of its long nose and tongue, numbats have been compared to anteaters who also eat thousands of insects for nourishment. Numbats don’t have sharp teeth like other carnivores do. Instead, they have teeth that look like pegs with dull edges. Numbats don’t chew the termites they capture so there is no need for them to have sharp teeth that can cut through meat.

The brownish red coat of a numbat helps it to blend into its forest environment when predators are around. Also, their eyes are on the sides of their head so they can see danger in time to seek protection inside a log or in a burrow. Numbats are fast and can scurry up a tree using their long claws to grip the bark and escape a predator. In fact, numbats can move up to 20 miles per hour when they need to make it somewhere quick!

Adult numbats are solitary animals. This is mostly due to the fact that they need to eat a lot of termites to maintain their energy level. Living alone means they don’t have to compete with a group of numbats for food. One of the few times you’ll see numbats together is during breeding season. Also, baby numbats live together for a while until they are ready to leave their nest and set out on their own. If numbats ever choose to gather together, the group is called a colony or a cloud.

Generally, numbats are not aggressive animals. They are alert and ready to freeze or run at the first sign of danger. However, two males can show aggression toward one another when competing for a female during breeding season.

Numbats once lived in areas of southern Australia as well as New South Wales and Victoria. Now, their territory is in the southwestern part of western Australia in the Eucalypt woodlands. Dryandra Woodlands close to Narrogin and Perup Nature Reserve next to Manjinup are two places where you’ll see numbats. In Eucalypt woodlands there are large groups of trees but there’s enough space for sunlight to filter through to warm the ground. This is important because termites don’t become active when the ground is cold. The climate is dry and temperate in these woodlands.

What do numbats eat? A numbat’s diet only includes termites. If they happen to eat an ant or another type of insect it’s because the trespassing insect was in the way when the numbat’s tongue was grabbing for termites underground. Numbats eat 20,000 termites per day. When a numbat eats 20,000 termites, it is eating one tenth of its own weight in food.

Numbats are active whenever termites are active. So, in the summertime when the sun warms the ground in the morning, stirring up the termites, numbats will be out looking for them. In the wintertime, when the sun is at its hottest during midday, the termites are active and so are the numbats. Numbats use their sense of smell to find termites underground. Also, some scientists believe numbats can feel the vibrations of termite activity as they walk along the forest floor. Numbats get a supply of water from the termites they eat. This has helped them adapt to the dry environment they live in.

As you may have guessed, numbats have a lot of predators. They are eaten by birds of prey in the area such as falcons, wedge-tailed eagles and collared sparrowhawks. Also, they are prey to carpet pythons, goannas and other reptiles. Foxes and feral cats hunt for numbats as well.

The habitat of numbats is threatened by people building houses and the expansion of farmlands. Cutting down and removing trees from the area where numbats live takes away their shelter as well as their food source. Bush fires also destroy the trees taking away shelter from numbats.

The population of numbats ranges around 1,000. This is due to all of their predators as well as the environmental threats. The numbat’s official conservation status is Endangered. This has put them on the Red List of the International Union for Conservation of Nature (IUCN). Numbats are protected under Australian law. So, there are penalties if someone is caught hunting them or capturing them for any reason.

Fortunately, there are sanctuaries where people care for numbats in order to increase the overall population. Two of these sanctuaries are Scotia Sanctuary and Yookamurra Sanctuary in Australia.

The mating season of the numbat goes from December to January. A male numbat uses a smelly substance from its sternal gland to mark logs in its territory to let females know it’s searching for a mate. A numbat mates with several females during this time. The gestation period of a numbat is just 14 days. This is one of the shortest gestation periods for any mammal. The female numbat gives live birth to 4 pups that each weigh less than one pound.

After they are born, the numbat pups attach themselves to their mother to nurse. She carries them along on her chest until they are about 6 months old. A mother numbat has small folds of skin on her chest to protect the pups as she moves up trees and over the ground. There are even small hairs called guard hairs inside the skinfolds to keep the pups warm. These folds of skin are kind of like a numbat’s version of a kangaroo’s pouch. Another adaptation of a numbat pup relates to its nose. A numbat pup has a flat, short nose that allows it to easily nurse for several months. After a pup reaches the point where it begins to eat termites, it develops the long, pointy nose seen on adult numbats. When the pups are 6 months old, the mother detaches them from her body partly because they are now too heavy to carry along with her. She leaves the pups in a hollow log or a burrow where she will visit to nurse them each day. When they are 8 or 9 months old, the pups leave the burrow for periods of time to practice capturing termites. When a numbat pup reaches 1 year old, it leaves the burrow to find a home and start life on its own. See here for a picture of a Numbat pup

Male and female numbats in the wild live for an average of 5 years. Numbats living a protected life in a sanctuary can sometimes live for 8 years. A numbat’s life can be cut short when it’s injured, and the injury becomes infected. Also, these marsupials are vulnerable to parasites that can cause disease.

The total population of numbats is less than 1,000. The official status of the numbat is: Endangered. Numbats are now a protected species, but the population is still in decline. However, there are steps being taken to increase the amount of numbats in Australia. The Perth Zoo is breeding numbats and releasing young ones into the wild. Also, there are protected areas such as Mt. Gibson Wildlife Sanctuary where numbats can breed and remain safe from predators including foxes and feral cats.

Are numbats carnivores, herbivores or omnivores?

Numbats are categorized as carnivores but are more specifically known as insectivores. Numbats are a bit unique because they are insectivores that only eat one type of insect (termites).

Is a numbat a mammal?

Yes, a numbat is a mammal. It’s also a marsupial like a koala bear or a kangaroo. Marsupials are unique because the babies are carried along by their mothers from birth.

One type of numbat is extinct. This type was known as Myrmecobius fasciatus rufus. But, the numbat discussed here is not extinct. Extinct status goes to animals that are no longer believed to be in existence anywhere in the world.

What Kingdom do Numbats belong to?

Numbats belong to the Kingdom Animalia.

What phylum do Numbats belong to?

Numbats belong to the phylum Chordata.

What class do Numbats belong to?

Numbats belong to the class Mammalia.

What family do Numbats belong to?

Numbats belong to the family Myrmecobiidae.

What order do Numbats belong to?

Numbats belong to the order Dasyuromorphia.

What genus do Numbats belong to?

Numbats belong to the genus Myrmecobius.

What type of covering do Numbats have?

Numbats are covered in Fur.

In what type of habitat do Numbats live?

What is the main prey for Numbats?

What are some predators of Numbats?

Predators of Numbats include snakes, foxes, and birds of prey.

What is the average litter size for a Numbat?

The average litter size for a Numbat is 4.

What is an interesting fact about Numbats?

There are less than 1,000 Numbats left in the wild!

What is the scientific name for the Numbat?

The scientific name for the Numbat is Myrmecobius Fasciatus.

What is the lifespan of a Numbat?

Numbats can live for 4 to 8 years.

What is the lifespan of a Numbat?

Numbats can live for 4 to 8 years.

How fast is a Numbat?

A Numbat can travel at speeds of up to 15 miles per hour.