It must be said that few terrestrial animals don’t eat insects. Wolves have been known to eat insects at need, and humans make surprisingly tasty meals of crickets, locusts, and the enormous grubs of Hercules beetles. They don’t even need to be terrestrial, for the archerfish uses a well-aimed stream of water to knock an insect into its pool. But the animals discussed here are insectivores or entomophagous, which means they have insects as a large or even exclusive part of their diet. With that in mind, here are 15 animals that always have insects on the menu:

Spiders of all shapes and sizes love to eat insects. Their venom both paralyzes the prey and starts the digestive process, making it easier for the spider to dine at its leisure. Spiders that spin webs wait for insects to bumble into the stickier strands. Other spiders, such as the wolf spider, hunt insects down. Spiders who live in burrows or funnels made out of silk lay trip lines outside the mouth of their abode and snatch any insect that walks over them.

One family of truly innovative spiders, the Deinopidae, use nets to catch insects. These spiders, who have long bodies like sticks, weave a net out of their silk, stretch it across their front legs then toss it over their prey. Huge eyes allow them to see well even in conditions of low light.

The name of this large insectivore found in Central and South America says much about it. Besides ants, the anteater also eats termites and has evolved to do so efficiently. It has a snout shaped like a tube that hides a sticky, spiny tongue that can be as much as 2 feet long. It uses this tongue to probe into ant and termite colonies and lap up the insects there. First, though, it tears those nests apart with its formidable front claws. Since the giant anteater doesn’t produce stomach acid, it uses grit and hard folds in its stomach to help digest its prey.

While normally opting to flee, a cornered giant anteater is a formidable opponent and has been know to kill jaguars and even humans. They grow up to seven feet long and stand on their rear feet and slash with their front claws to defend themselves.

This little armadillo of the forests and grasslands of Central America and northern South America uses an enlarged middle claw of its front feet to tear open ant and termite mounds. Like the anteater, it then inserts a long sticky tongue and laps the insects up.

These armored ground mammals have big appetites! They need a lot of sustenance from a steady source of insect nutrition. So, they twist their bodies around to drive those front foot claws deep into the earth. This helps them uncover those tasty ants and termites.

Pangolins operate much the same way as armadillos and anteaters, but they are not related. Found in Africa and southern Asia, they are toothless and collect ants, termites, and larvae with their tongue. The pangolin’s tongue can be 16 inches long but only 1/5 of an inch wide and is rooted in the animal’s sternum. Pangolins are famous for being covered with sharp scales made out of horns, which are lost and replaced now and then. Some people believe pangolins have medicinal properties, and most species are threatened with extinction.

Found from coast to coast in Central Africa and given its name because it was sometimes found on the walls of mausoleums, this little bat hunts moths at night. Though it prefers to rest during the day, it will eat termites, mosquitoes, and butterflies if it hunts during the daylight hours. Because of this, the bat is welcome in places where buildings are prone to termite damage and people are at risk for malaria. The Mauritian tomb bat has grizzled gray fur and a body length of between 2.25 and 3.5 inches.

The numbat has 52 teeth, the most of any terrestrial mammal. Interestingly, it does not really use those teeth to chew its favorite meal, termites. Like the anteater and the armadillo and the pangolin, the numbat has a long, sticky tongue to insert into the nests of its prey. Ridges on its soft palate scrape the insects off of the tongue before they’re swallowed.

The numbat is a marsupial and has better vision than any other animal in its infraclass. It looks rather like a squirrel with a long, pointed snout. It has orange-brown fur with six or seven stripes from its shoulder to its rump. The numbat is endangered and is now found only in Western Australia.

This little insect-loving animal lives in central Australia. It looks much like a small mouse, with a tail longer than its body, small, round ears, a round body, and gray fur, but it’s a marsupial. It is nocturnal and lives in a log, among spinifex hummocks or in an underground tunnel, where it feasts on tiny insects, cockroaches, grasshoppers, beetles, crickets, and spiders.

Like many other entomophagous animals, the short-beaked echidna has a thin snout and long, sticky tongue to capture its prey of ants and termites. A supremely weird creature, it is one of the few mammals that lay eggs. It also hibernates even when the weather is warm and insects are still plentiful. During that time, its temperature can plunge to 39 degrees Fahrenheit. Its body bears long, thick spines, and the echidna curls up, armadillo or pangolin-like, to deter predators.

Other than this, the snout of the short-beaked echidna has receptors that can detect electrical fields and mechanical pressure. They have powerful claws to tear apart nests but are picky about the insects they eat. They prize eggs, pupae, and alates and avoid termites and ants that give off nasty secretions. Echidnas will also eat the grubs of scarab beetles, but as the echidna’s mouth is tiny, it needs to mash them up first.

This shrew, found in Africa’s Congo Basin, is known for the strength of its spinal column, which can bear as much as 159 pounds of weight. Scientists do not know why this is, but people in the region believe the hero shrew, which is only 4 to 6 inches long, has magical properties and will make a warrior invincible in battle.

The hero shrew hunts a variety of insects in the underbrush where it lives.

This small but beautiful bird, a member of the tyrant flycatcher family, is found in the marshes and grassy lakeshores of southern South America. It catches insects by sallying. This means it leaps from its perch, grabs an insect out of the air then flies back to its perch to eat it. Also called Siete colores for its vivid plumage, the many-colored rush tyrant breeds in the United States and Mexico and spends the winter in points south, including southern Mexico, the Caribbean, and Central America.

Also found in South America, this bird is a type of woodcreeper. It climbs up the branches and trunks of trees, using its very long, scythe-shaped beak to probe crevices and under bark in its search for insects. The bird can also use its bill to probe deeply inside of flowers, find insects and pull them out. Often, the red-billed scythebill is seen with mixed flocks of other insectivorous birds.

Speaking of archerfish, this animal, also called the rifle fish has a diet made up mostly of insects. It really does spot an insect on an overhanging branch or leaf and spits water at it from as far as 4 feet away. The insect is then knocked into the water. Occasionally, the archerfish will just leap out of the water and snatch the insect in mid-flight.

The banded archerfish is found in the mangrove swamps of Oceania. It is about 0.8 feet long and has a silvery, black-banded body and a jutting lower jaw. It is popular as a pet but must be fed live food.

The predators of insects are largely other insects, and the dragonfly is simply a master at catching and eating fellow members of the Insecta class.

The dragonfly’s wings are powerful and allow it to change direction instantly, fly backward, forward, up, down, left, and right. A dragonfly can hover or can fly as fast as 60 miles per hour. Its eyesight is acute, and it instantly snatches insect prey out of the air. It eats mosquitoes, butterflies, damselflies, and even smaller members of its own species. The dragonfly will bite the prey’s head to incapacitate it, take it to a perch, tear off the wings and eat it from head to the tail.

Not all toads and frogs are strictly entomophagous, but the spring peeper is. At only 1.5 inches in length, this little chorus frog found in the wet places of eastern North America is too small to take slugs, small birds, bats, small reptiles, small rodents, or even other frogs like larger and more aggressive anurans. Members of Pseudacris crucifer mostly hunt at night if they live at the edges of the woods, while those that live deeper in the forest hunt both day and night. They eat ants, flies, beetles, and spiders.

This lizard of the desert and semi-desert has been found as far to the north as Michigan and as far to the east as Washington D.C. This insectivore is a specialist in harvester ants but will take other insects if it must. Unlike anteaters or armadillos, the Texas horned lizard does not have specialized physiology that makes capturing and eating ants more efficient, though its tongue is sticky. The lizard simply waits by the entrance of the ant nest between 9 and 11 in the morning and waits for them to come out. Then, it tilts its head and laps them up.

To sum it up, here are 15 examples of amazing insect-eating animals: 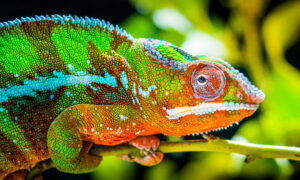