The falcon is faster than any other animal on earth, both on land and in the air

birds is wholly considered to be the fastest living animal." />

Click through all of our Falcon images in the gallery. 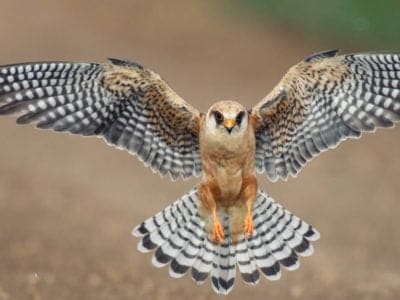 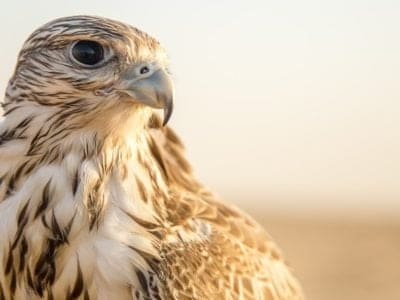 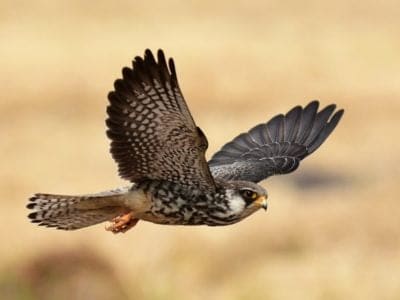 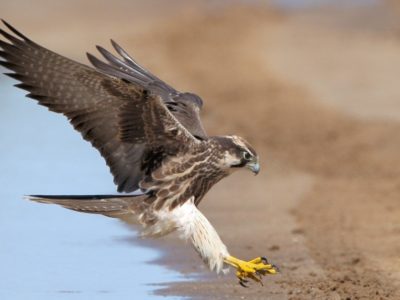 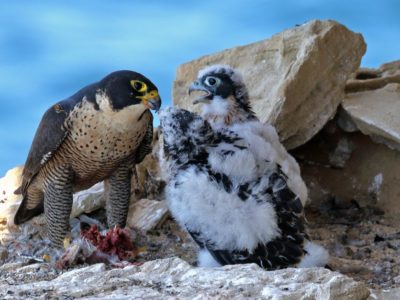 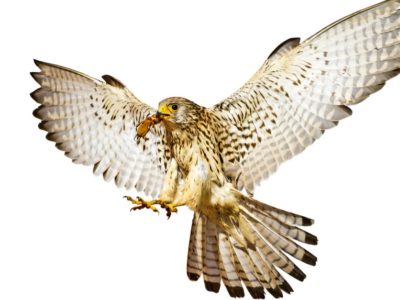 View all of the Falcon images!

The falcon is faster than any other animal on earth, both on land and in the air!

Known for its precision and speed, the falcon bird seeks out its food like a bird of prey. Falcons, rather than being one species of bird, actually include 40 different species with specific traits that make each one unique. Even with many different types of falcons, the family of birds is wholly considered to be the fastest living animal.

Falcon birds have a close relationship to hawks, possessing the same ferocity and quick reactions. Their streamlined bodies display slender, pointed wings. With their agility, these birds can often snatch their prey while they are in mid-flight.

As close as falcons may be to hawks, there are many characteristics to distinctly tell them apart. Falcon birds may have broad and long wings, but the hawk has significantly shorter wings, which is the easiest way to tell them apart in the air. Despite their wingspan, hawks tend to be larger than falcons.

Speed is another major difference between falcons and hawks. Falcon birds have incredible speed, while hawks can’t match up. They are not nearly as fast, preventing them from gliding through the air in the same way.
Catching prey is also different between the birds. While falcons go after their prey with their beak, the hawk will catch it with their claws.

Where to Find Falcons

These birds seem to be spread across the world, including areas from the United States to the Tundra. Each species seems to have its own area that it prefers to reside in. For example, the American kestrel will migrate throughout the contiguous United States, sharing this home with peregrine falcons. They will also travel as far as Alaska and Hawaii.

Peregrine falcons like to travel even further to every continent, and even feel comfortable in the desert. However, as well-accustomed as they are to extreme temperatures, the only area that this bird will not go to is Antarctica.

In these locations, the birds will make their nest from tree holes, as well as on cliffs and natural ledges.

The name “hawk” has French and English origins, coming from the word “faucon.” The Latin word for the bird – falconem – comes from the word falx, named for the similarity that their physical characteristics – like their talons, beak, and wings – to a curved blade.

These birds can range from 13 to 23 inches, weighing approximately 1.5 to 3.3 pounds. Most of these prey birds ultimately range from a small to medium size, and their head is adorned with a black crown of feathers. This blackness extends to their nap and wedge as well, connecting the colors to loos like a helmet over the bird’s head.

With long and pointed wings, these features are typically slate grey, creating a distinct contrast with the head. Along their throat, the feathers are white to nearly cream in color, and the sides of the abdomen feature both brown and black bars.

These birds tend to be solitary, primarily coming together during the mating season and no other times of the year. During the rest of the time, these birds will spend the days either resting at the tops of tall trees or hunting down food. The majority of species will hunt in the daytime, taking any opportunity with the sunlight (even at dusk and dawn) to hunt.

These birds will migrate seasonally, seeking out a milder region when the weather is increasingly cold during the winter. The migratory species will often go to Central or South America, though some will only journey to the southern United States. Interestingly, some of them do not migrate at all.
When it comes to their home, falcons are incredibly territorial. They will fight and attack to defend their resting place, protecting themselves and their youth from humans, birds, and other animals.

These birds are carnivorous, meaning that they primarily consume meat in their diet. The sources of nutrients that they prefer will vary from species to species, but they are not picky; most often, they will just seek out food that is easy to catch without much work.

Falcons don’t often go after big game. Rodents, small reptiles, and small amphibians are the most common sources of nutrients.

Like many living creatures, these birds tend to have their own slew of predators and other threats to their life. Though their predatory characteristics keep them rather high on the food chain, humans and wolves are both dangers to the falcon population.

Large owls will seek out the birds that are still young and inexperienced in their defenses. However, more often than not, animals that prey on falcons will consume their eggs and young for a smaller challenge, as they cannot protect themselves without the help of their parents yet.

Though these birds are considered to be at the “least concern” on the endangered species list, there are still many laws that protect these birds (along with hawks and eagles) from being hunted as meat.

What Does a Falcon Eat?

The food sources that these birds eat is entirely dependent on what they can lift and what they can catch. As speedy as most rodents are, falcons will seek out mice, rats, and even rabbits. If another bird is small enough to be caught in the sharp beak of the falcon, these birds will seek them out as well.

Additionally, they consume snakes and frogs, despite the defenses that these animals may have against predators.

As stated above, wolves and large owls have been known to go after falcons as food. However, they are not often the prey in the wild.

Even though humans are a threat, most sources say that it is not good to eat them. Their bodies do not often have any fat, due to their physical activity, making the meat rather dry. Furthermore, the primary concern with consuming falcon meat is due to the legal issues around hunting the birds.

Most of the falcon species are monogamous which means that they have one mating partner. They usually mark territories around their nesting sites at the time of mating.

Female falcons take full responsibility for the incubation of babies that are known as chicks. They take care of the babies while the male falcons hunt for food.

The total number of falcons around the world is currently unknown, but their conservations status is considered to be “least concern” overall. The most recent estimates suggest that there are about 140,000 falcons in the world.

The peregrine falcon, however, was formerly considered endangered when certain pesticides were used over 50 years ago, killing much of the population. Since DDT – one of the deadliest pesticides – was banned, peregrine falcons have flourished, and their nesting areas are now protected.

Are Falcons herbivores, carnivores, or omnivores?

Falcons are Carnivores, meaning they eat other animals.

What Kingdom do Falcons belong to?

Falcons belong to the Kingdom Animalia.

What class do Falcons belong to?

Falcons belong to the class Aves.

What phylum to Falcons belong to?

Falcons belong to the phylum Chordata.

What is a falcon?

Falcon is a small to medium-sized prey bird that is known to be very fast in catching its prey.

How many types of falcons are there?

There are 40 different species of falcons in the world.

Where are falcons found?

Different species of falcons are found in a variety of places including Alaska, Hawaii, and New York City.

Is a falcon a hawk?

While falcons and hawks are closely related, there are some differences between the two.

Falcons attack humans and other birds and animals only when they sense a danger to their nests.

Some species of falcons are known to be seasonal migrators.

How many eggs do falcons lay?

Every cluster has about two to four eggs.

How fast does a falcon fly?

Falcons are known to fly at a speed of 242 mph.

What is a falcon’s wingspan?

When do falcons leave the nest?

Different species of falcons take different amounts of time to leave their nests.

What family do Falcons belong to?

Falcons belong to the family Falconidae.

What order do Falcons belong to?

Falcons belong to the order Falconiformes.

What type of covering do Falcons have?

Falcons are covered in Feathers.

What genus do Falcons belong to?

Falcons belong to the genus Falco.

What is the main prey for Falcons?

What are some predators of Falcons?

Predators of Falcons include humans, eagles, owls, and wolves.

What are some distinguishing features of Falcons?

What is an interesting fact about Falcons?

Falcons are the fastest creatures on the planet!

What is the lifespan of a Falcon?

What is the Falcon's wingspan?

How do Falcons have babies?