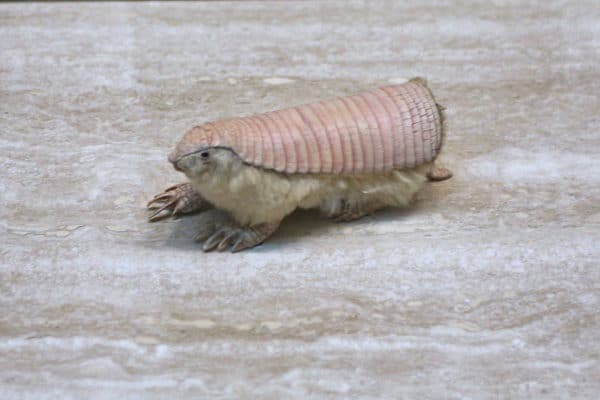 “The smallest known species of armadillo”

Also known as the Pichiciego, the pink fairy armadillo is the smallest known species of armadillo. It lives in the sandy plains and dry grasslands of central Argentina and other parts of South America. Unique adaptations like an aerodynamic body shape, smooth dorsal shell, and sharp claws mean this creature is able to completely bury itself in sand in a matter of seconds and then nagivate underground with ease. Similar to a mole, the pink fairy armadillo will spend the vast majority of its life underground. It is also nocturnal, only emerging ocassionally at night to find food.

The Pink Fiary Armadillo's scientific name is Chlamyphorus truncatus. The animal is also known as 'the sand swimmer' because of their uncanny ability to burrow and navigate underground. The animal is named for the uniquely pink color of it's protective armor. The first known published description of the pink fairy armadillo was by Richard Harlan in 1825.

At only 120g and approximately 13cm in length the pink fairy armadillow is the smallest armadillo species. It is also extremely elusive, spending most of it's life beneath ground. It is also nocturnal, only emerging at night to gather food. Similar to other fossorial species, the pink fairy armadillo has claws on its front legs used for digging, a fusiform body shape, and minimal eye size. It also has a carapace (protective shell). Their shell of armor is light pink in color and contains 24 total bands. The shell forms a blunt end due to an extra vertical plate at the end of the shell. In total, the pink fairy armadillo has 28 teeth. These are all the same shape and have no enamel.

Unlike other armadillo species, the pink fairy armadillo has no visible ears and an additional large plate on the back of their head. Uniquely, the fairy armadillo's shell is not primarily used for protection. Instead, the main function is for thermoregulation. The armadillo can flush the blood vessels in its shell (hence the pink color), and adjust its body temperature. If the armadillo exposes more of its blood to the cool air it can lower it's temperature. Inversely, drainign the shell allos the animal to better retain heat. The pink fairy armadillo's shell is also not entirely attached to its body. A thin membrane runs along the creature’s spinal column for attachment.

Due to their low basal metabolic rates, pink fairy armadillos have a low body temperature and a high thermal conductance. Their metabolic rate is up to 60 percent lower than what is generally expected for a mammal of that body mass. This allows the pink fairy armadillo to help maintain its body temperature while in its burrow. Smaller creatures generally always have a tougher time retaining body heat due to their higher surface-area-to-volume ratio. This is why larger animals tend to live in colder environments while smaller animals are more often found in desert environments. 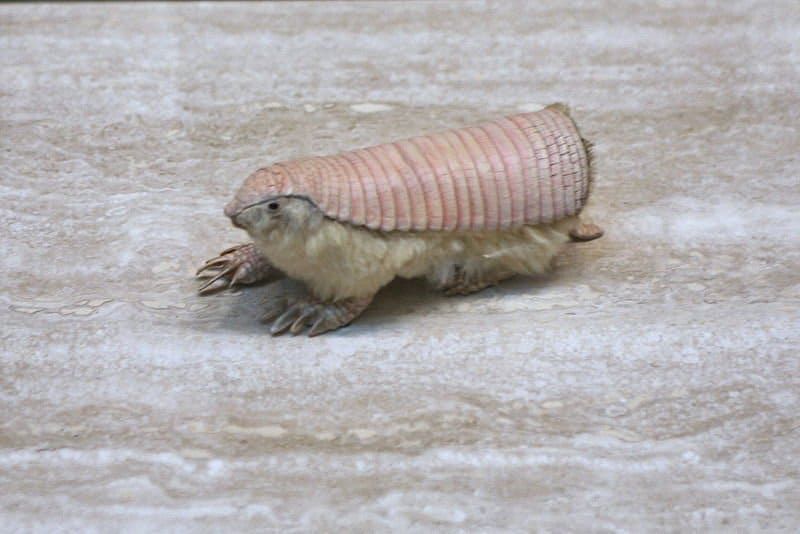 Pink fairy armadillos can be found in the deserts and dry scrub lands of central Argentina and other parts of South America. Found primarily in the Neotropical regions of Mendoza, Buenos Aires, San Luis, La Pampa, and San Juan, the pink fairy armadillo’s geographic range is limited to areas in the east because of heavy rainfall in other regions. Because they tunnel only 6 inches below the surface, even modest rainfall can result in flooded burrows. Due to climate change and adverse conditions, it is predicted that the current population of pink fairy armadillos is low. The animal has been found from 1,500m in elevation all the way down to sea level.

The Pink Fairy Armadillo is an omnivore. Their diet mainly consists of ants, but ocassionally also snails, plant matter, and worms. The creature often builds complex tunnel systems within close proximity to ant hills, and primarily emerges to gather food during the nighttime.

The most common predator for pink fairy armadillos are domestic dogs and cats. Because the armored shell on the animal’s back offers minimal protection, the creature often retreats underground as a primary defense mechanism. Humans can be deadly to the pink fairy armadillo in a number of ways. The animal often falls prey to vehicles while attempting to cross a road. Also, if a pink fairy armadillo is taken in as a pet, they will likely become overwrought with stress and be unable to adapt to the artificial diet provided to them. It is estimated that more than 95 percent of pink fairy armadillos that fall into captivity die within eight days of being captured. Lastly, because pink fairy armadillos tunnel so close to the surface, converting their natural habitate to farmland or grazing areas for cattle can quickly damage their tunnel systems.

According to the research that has been gathered, the population of the pink fairy armadillo continues to decrease, resulting in the animal being listed as a Threatened species since 1970.

The pink fairy armadillo leads a solitary life except during mating. A female generally gives birth to a single young during a mating cycle. The baby armadillo’s shell is soft at birth will only become entirely hardened once it has grown into an adult.

Can You have a pink fairy armadillo as a pet?

Why is the pink fairy armadillo pink?