Click through all of our Polyphemus moth images in the gallery. 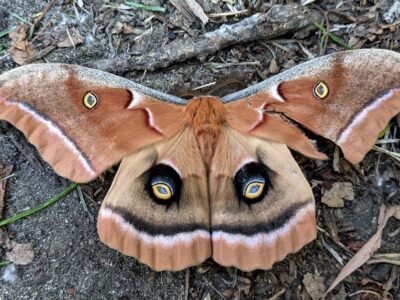 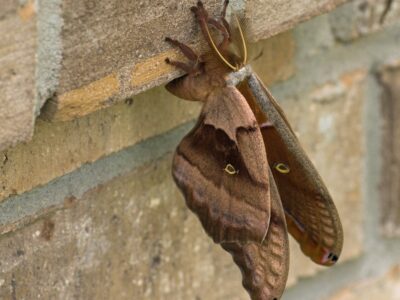 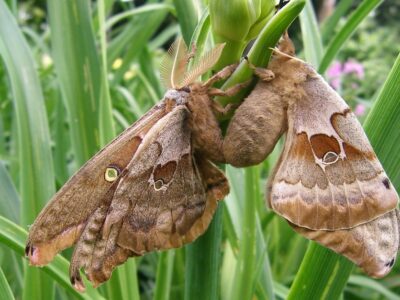 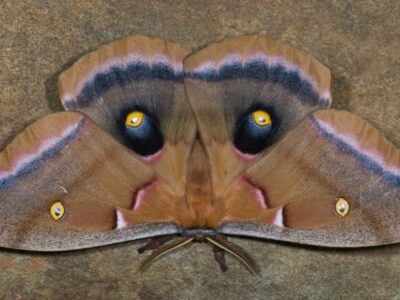 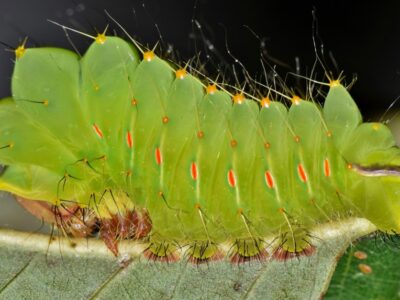 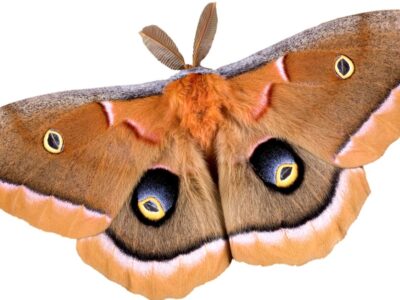 View all of the Polyphemus moth images!

“The Polyphemus moth is named after a character in Greek mythology!”

A member of the Saturniidae family, this large moth is easily recognizable by the eyespots on its wings. These spots are supposed to startle would-be predators when the moth suddenly opens its wings, which should give the moth time to fly to a safer location. However, even if it does get away, the Polyphemus moth only lives about four days, tops. Its mouth is vestigial, and its only purpose is to reproduce.

Here are some more facts about this fascinating creature:

The moth’s scientific name is Antheraea polyphemus. The meaning of Antheraea is probably “showy, flowery or brightly colored.” It comes from a New Latin word borrowed from the Greek antheros. In taxonomy, lepidopterans in the Antheraea genus are large moths whose caterpillars produce silk that is used as fabric. Cousins of the Polyphemus moth include the Assam silk moth, the western Polyphemus moth, which isn’t a subspecies of Antheraea polyphemus, and the Japanese oak silk moth.

The meaning of polyphemus refers to the cyclops Polyphemus, who kidnapped Odysseus and his men in The Odyssey. He was a giant with a single huge eye in the middle of his forehead. Odysseus managed to put his eye out, and this allowed his crew to escape. Polyphemus’ huge eye, of course, refers to the startling eyespots on the moth’s wings.

Appearance: How To Identify Polyphemus moths

Polyphemus moths are one of the most identifiable of the silk moths. It is a giant moth with a 4 to 6-inch wingspan. It could be mistaken for a butterfly until a person takes a closer look. The ground colors of the wings range from yellow to a deep cinnamon brown, and there’s a red margin near the base of the animal’s forewings and two dark patches right at the tips of the forewings. But what makes the moth easy to identify are the eyespots. The eyespots on the forewings are small and transparent, but the eyespots on the hindwings are large and purplish with a lemon-colored and lemon-shaped patch inside of them. The antennae of the males are deeply feathered. The antennae of the female are less feathered, and she is plumper because of her eggs.

Of course, the Antheraea polyphemus is a caterpillar before it is a moth. After hatching from a tiny egg that resembles a camera battery except it is light brown with two brown bands around it, the caterpillar is black and white striped, rather like a zebra. It has orange setae down its back. After it sheds its skin it becomes an intense shade of leaf green, with silver and red warts at the top of the abdominal section. Hairs sprout from the red spots, and every abdominal segment has a diagonal yellow line.

The caterpillar has an orange-brown head that’s partially withdrawn into the first thoracic segment, brown “true” legs, and yellow and black prolegs. Prolegs are fleshy protuberances found on the third, fourth, fifth, sixth, and tenth abdominal segments. The caterpillar can be as long as 3 inches.

It’s easy to tell the sexes apart with these moths. The males have feathery antennae which assist in mating, for they pick up the pheromones released by the females. The antennae of the females are more slender and less bushy. Females are also fatter than males due to their cargo of eggs, and if mating doesn’t occur after a period of time, she’ll simply release them even if they’re not fertilized.

A person can even tell the sex of the animal by the pupae and the caterpillars. A female pupa has a notch at the end, and the lines of what will become the antennae don’t meet. The male lacks a notch, and the antennae lines meet. Male caterpillars also have a black pit at the bottom of their ninth abdominal segment.

Habitat: Where to Find Polyphemus Moths

Polyphemus moths are one of the most common moths in North America. Caterpillars can be found on their host plants in the spring and in the late summer. These plants include ash and birch trees, dogwoods, apple, and other fruit trees, maples, oaks, hazels, willows, and their relatives. They also feed on rose bushes and plants related to roses. The color of the caterpillar matches the colors of the host plant’s leaves, which makes them hard to see.

Diet: What Do Polyphemus Moths Eat?

Polyphemus moths do not eat or bite. Their mouths are vestigial and useless. Their caterpillars, however, are voracious and can eat 86,000 times their own weight from the time they hatch out of their egg to the time they pupate.

Are Polyphemus moths dangerous or harmful?

Polyphemus moths are not at all dangerous or harmful. They do not bite nor do they sting. Their beauty is to be simply enjoyed.  Admittedly the caterpillars may do a number of rose bushes, fruit trees, and other vegetation, but there are generally not enough of them at one time to do irreversible damage.

How many legs does Polyphemus moth have?

A Polyphemus moth has six legs like most other insects.

How do you identify Polyphemus moth?

The Polyphemus moth can be identified by its large size, its butterfly-like wings, and the two large eyespots in colors of purplish and yellow on its hind wings.

These moths don’t eat or even drink, so their lifespan is reduced to a few days.

How long do Polyphemus moths live?

The moths live less than a week, generally. The caterpillars can overwinter and can live for a few months.

Where are Polyphemus moths found?

The locations of these giant moths are in North America from Canada down to Mexico.

What are the characteristics of a Polyphemus moth?

The characteristics of a Polyphemus moth are a large wingspan, with the wings in shades of brown. There are two clear eyespots on the forewings and two large eyespots on the hindwing. The antennae are plumose, meaning that they resemble bird feathers.

Polyphemus eggs are a bit flattened and come in colors of light brown with dark brown bands around the centers. They are about 0.049 inches thick and 0.118 inches around.

How long does it take for a Polyphemus moth cocoon to hatch?

The moth breaks out of its cocoon after about two weeks, though they can overwinter.