The river jack snake has a gigantic horn-like scale on the tip of its nose. 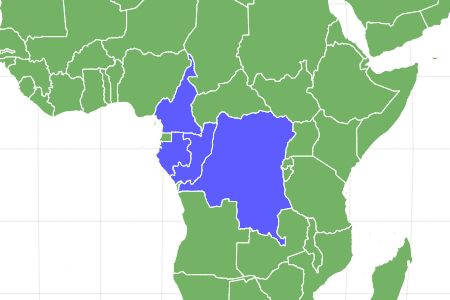 View all of our Rhino Viper pictures in the gallery.

View all of the Rhino Viper images!

The river jack snake has a gigantic horn-like scale on the tip of its nose.

The rhino viper, also known as the river jack snake and the butterfly viper, is among the most unique-looking snakes in the world. With their forward-set eyes and complex markings, the head actually looks more like a gecko or lizard than a snake. Because they tend to live in such remote locations, river jacks are rarely encountered by people.

Where to Find River Jack Snakes

River jack snakes are found throughout the tropical forests of Central and West Africa. They usually stay in close proximity to a swamp, lake, or pond, where they often bask in the water. They are most commonly found in countries like the Republic of Congo, Democratic Republic of Congo, Gabon, and Cameroon. However, the Western population is cut off from the Central population by a gap in the forest cover.

The scientific name of the river jack snake is Bitis nasicornis. This name may be derived from the Latin word nasus, meaning nose, which refers to the prominent horn on the end of the head. The river jack is most closely related to the puff adder, horned adder, and other species in the Bitis genus.

According to the IUCN Redlist, the river jack is a vulnerable species. Population numbers have not been properly estimated, but overall the species appears to be in decline. The greatest threat to its continued survival appears to be habitat destruction and deforestation.

How to Identify the River Jack Snake: Appearance and Description

The river jack snake is fairly easy to identify thanks to its completely unique appearance. It has a short but stout body with a triangle-shaped head and rough, keeled scales from head to tail. The eyes also project outward from the head. Most specimens measure about 2 or 3 feet long, but some can grow up to 4 feet. Females are slightly larger than males on average, but otherwise their appearance is similar to each other. The most prominent characteristic is the two or three large horns extending from the end of the nose. It is not entirely clear what purpose this serves.

The color pattern is a fascinating, almost painterly combination of a yellowish-white or bluish-green stripe down the back mixed intermittently with dark brown oblong markings. The flanks are equally interesting in the alteration between dark and light patterns. The markings vary among individuals and depend largely on the snake’s habitat. They provide camouflage to protect the snake from dangerous predators and also veil it from prey. An immobile river jack is very hard to identify against the forest floor. Baby river jack snakes have an immature version of the same color pattern.

Here is a quick rundown of how to identify the river jack snake:

River Jack Snake: How Dangerous Are They?

The river jack snake is capable of producing two different types of dangerous venom. One type attacks the circulatory system of its prey, destroys tissue, and causes extensive hemorrhaging. The other type directly attacks the nervous system, but in humans this is far less potent than the other venom. If bitten, medical attention should be sought immediately. The venom is considered to be quite potent. Massive swelling and even, in rare cases, necrosis can occur. Fortunately, anti-venom for this snake is available, and death is rare.

The river jack snake is generally quite slow-moving and not very aggressive, but if provoked in some manner, they will usually puff up their body and give a loud hiss. River jacks have the ability to strike out quickly in self-defense and bite with their sharp fangs. Their reach extends up to half their body length in every direction. Due to their limited territorial range, few attacks on people are known to occur. They prefer to inhabit remote forests and swamps. However, they should still be considered highly dangerous and potentially aggressive. They are difficult to handle because their prehensile tail gives them the ability to swing around and strike when being held.

How do river jack snakes hunt?

The river jack usually lies motionless along the ground and ambushes prey as they wander by. The snake will strike quickly and inject venom with its fangs. If the prey cannot be easily swallowed whole in a single bite, then the snake may wait several minutes for the venom to fully work. The venom kills small prey quickly due to massive bleeding.

The river jack is rarely aggressive unless directly provoked. But if they do feel threatened, then they will give their warning display and then bite.

Where do river jack snakes live?

What do river jack snakes eat?

What is a river jack snake?

The river jack is a unique-looking snake, easily identified by the complex color scheme and the two or three large horns on its nose. It belongs to the viper family, which are primarily defined by their hinged fangs and toxic venom.

What does rhino viper venom do?

The venom attacks the circulatory system and destroys blood vessels. At its worst, the venom is known to cause extensive bleeding. It can also attack the nervous system.

Are the river jack snake and rhino viper the same thing?

Yes, river jack and rhino viper are different names for the same species. Rhino viper was once the most commonly used name, but it was deemphasized in favor of the river jack snake after leading to some confusion with the West African gaboon viper, which goes by the scientific name Bitis rhinoceros. Butterfly viper is actually preferred among some experts. River jack is kind of an informal name.

Where are river jack snakes found?

They are found in various countries throughout Central and Western Africa.