Only found in North America!

Click through all of our Snapping Turtle images in the gallery. 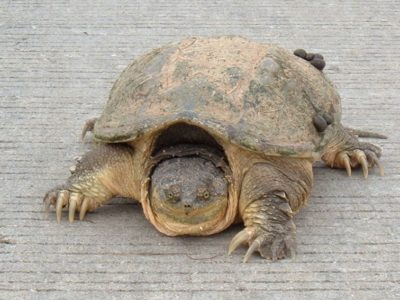 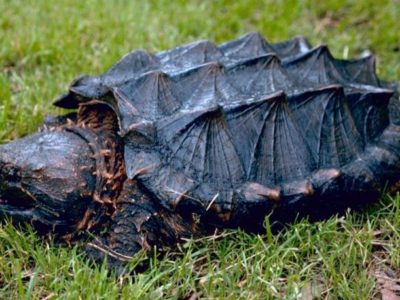 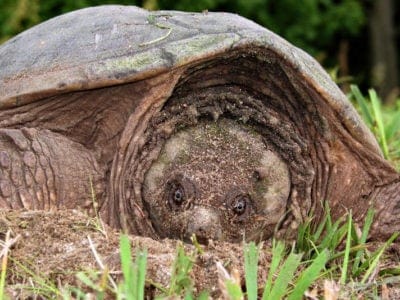 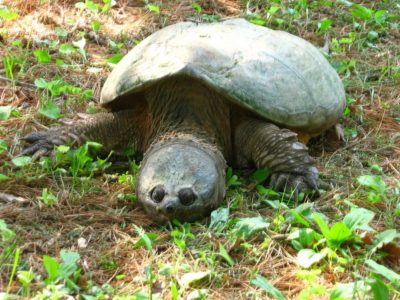 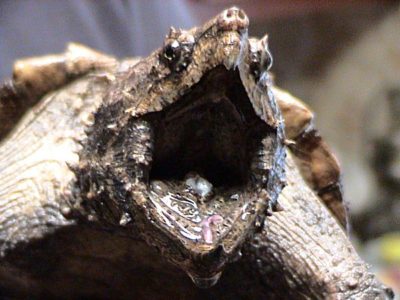 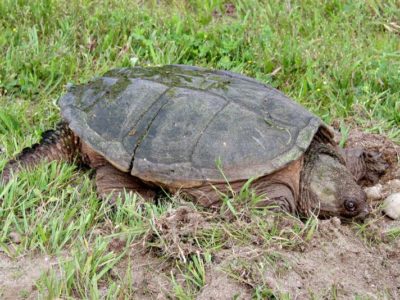 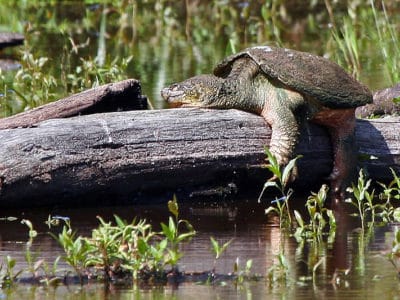 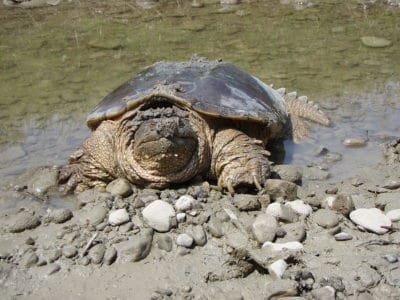 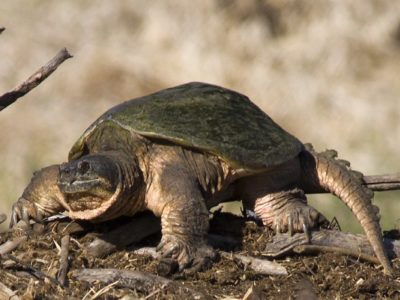 View all of the Snapping Turtle images!

Unlike other turtles, a common snapping turtle is not able to fit its whole body into its shell.

Snapping turtles can live to be 30 years old in the wild. Their living area spreads from southeastern Canada all the way down through the central and eastern parts of the United States and into the state of Florida. A snapping turtle’s shell can grow up to 20 inches in length. These turtles are omnivores, eating both animal and plant life. Adult turtles are aggressive and have very few predators.

A snapping turtle goes by other names including snapper and Tortuga Lagarto. In English, Tortuga Lagarto translates to lizard turtle. The scientific name for this turtle is Chelydra serpentine. While the first part of the name refers to its family, the Latin word ‘serpentine’ refers to its serpent, or snake-like, behavior. It can move its head and neck in a way that’s similar to a snake. It is in the class Reptilia.

These turtles have two dark eyes and a mouth shaped like a hooked beak, along with four legs and webbed feet. Each foot of these turtles features five strong claws. The skin of this turtle is covered in rough bumps called tubercles.

The underside of this turtle features a strong plate called a plastron. This plate is not large enough to allow a snapping turtle to retreat completely into its shell. So, disappearing into its shell (like other turtles) is not an option when a predator appears in front of this turtle.

Instead, if this turtle is in the water when a predator appears, it will swim away and hide near the bottom of a pond or river. But most of the time, this turtle acts in an aggressive way toward any predator especially when it’s moving around on land. They use their claws, sharp hooked beak, and powerful jaws to attack a predator.

Its neck and head have a large range of movement and it can move quickly against a threatening animal. This animal is definitely aggressive and is sometimes described as vicious when confronting predators.

Of course, being able to move its head and neck around easily can help this turtle to capture prey as well.

These turtles are solitary except during the mating season. The number of snapping turtles living near one another in a particular area depends on the amount of food available there.

These turtles can be found across a large part of North America. They live in areas of southeastern Canada down through the central and eastern parts of the United States. They live throughout the state of Florida as well.

Most snapping turtles live in a temperate climate – not too cold or too hot. However, some of these turtles do live in Canada where it gets very cold. These turtles actually hibernate for five or six months. They bury themselves in the mud until the warm weather months arrive once again.

Thesse turtles live in streams, lakes, rivers, ponds, and other bodies of water. They spend most of their time in the water except during mating season.

These turtles have strong legs and webbed feet making them excellent swimmers. They may retreat to the muddy bottom of a pond or river when threatened. However, they are sometimes found sunning themselves on a fallen log in a pond or creek.

A common snapping turtle may sneak up on a duckling swimming in a lake and pull it under the water to eat it. Or it could dart after a frog in the water and capture it.

The alligator snapping turtle has a tongue it can wiggle like a worm. The turtle hides in the vegetation and wiggles its tongue. A fish approaches the hidden turtle thinking it’s found a worm, then the turtle grabs the fish and eats it. Snapping turtles can also feel vibrations in the water around them allowing them to detect prey.

An adult turtle with its aggressive nature and powerful jaws doesn’t have many predators. Although, these turtles may be eaten by a larger turtle.

Humans are actually a threat to snapping turtles. Some humans capture these turtles to eat them or take young turtles to sell as pets.

The mating season for this turtle goes from April to November. A male turtle uses his sense of smell to find a female to mate with. They communicate with one another using leg movements.

A few weeks later, a pregnant female moves onto land and digs a hole on the sandy shore using her legs and claws. She lays her eggs in the hole. A female can lay a group, or clutch, of about 10 to 80 eggs. They hatch in about 80 to 90 days. These turtles lay a lot of eggs because many of the young don’t make it to adulthood.

One of the reasons not many baby turtles survive is because the female does not stay with the nest of eggs. She goes back into the water almost immediately and the eggs are left alone. The eggs are buried in the sand which is their only protection against predators.

Oftentimes, there are a few eggs in the nest that doesn’t even hatch. Also, many turtle eggs are discovered by predators and eaten. A predator such as a fox or a raccoon can smell the presence of turtle eggs in the ground.

When the eggs hatch, the baby turtles (also known as hatchlings) crawl out. A hatchling is about the same size as a quarter. After coming out of their eggs, the hatchlings immediately crawl toward a nearby pond or river. They have soft shells when they hatch so they are still very vulnerable to predators as they move toward the water.

Once they enter the water, they are on their own to find food and shelter. Turtle hatchlings find small pieces of vegetation and insects to eat. But, as they grow, they are able to eat larger prey. Also, a young turtle’s shell gets harder as it grows older.

These turtles can live to be 30 years old in the wild and live to the age of 50 in captivity. A wild turtle may be eaten by a larger turtle, captured by a human, or even killed while trying to cross a road. In short, a wild turtle faces more threats than one living in the safety of a zoo or wildlife conservation park. The oldest alligator snapping turtle in captivity lived for 150 years!

What do snapping turtles eat - are they carnivores, herbivores, or omnivores?

Snapping turtles eat both animals and plants. Their omnivorous diet includes frogs, fish, ducks, and vegetation they find in the water.

Can snapping turtles hurt you?

Can a snapping turtle bite off your finger?

How fast is a snapping turtle?

When you think of the average turtle you probably don’t picture it as being fast. But snapping turtles are fast. They can stick their neck out a long way and lunge or move in your direction with surprising speed. Furthermore, they have their mouth wide open when they do this. So, it’s best to not go near this turtle if you ever see one.

How do you know if a turtle is a snapping turtle?

How do you safely pick up a snapping turtle?

What Kingdom do Snapping Turtles belong to?

What phylum do Snapping Turtles belong to?

What class do Snapping Turtles belong to?

What family do Snapping Turtles belong to?

What order do Snapping Turtles belong to?

What genus do Snapping Turtles belong to?

What type of covering do Snapping Turtles have?

Snapping Turtles are covered in Scales.

In what type of habitat do Snapping Turtles live?

What are some predators of Snapping Turtles?

Predators of Snapping Turtles include humans, raccoons, and alligators.

What is the average litter size for a Snapping Turtle?

The average litter size for a Snapping Turtle is 35.

What is an interesting fact about Snapping Turtles?

Snapping Turtles are only found in North America!

What is the scientific name for the Snapping Turtle?

The scientific name for the Snapping Turtle is Chelydridae.

What is the lifespan of a Snapping Turtle?

Snapping Turtles can live for 20 to 32 years.

How do Snapping Turtles have babies?