None have been seen in the wild for 50 years! 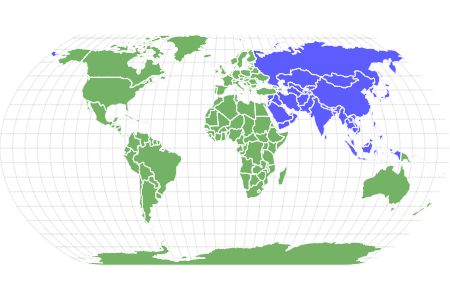 View all of our White Tiger pictures in the gallery.

View all of the White Tiger images!

The White Tiger (also known as the White Bengal Tiger) is a subspecies of Tiger, found throughout the Indian subcontinent. Although the range of the White Tiger is historically very large, these animals are incredibly rare as their colouration is dependent on a defective, recessive gene that is passed on from their parents. Over the past couple of centuries the White Tiger has become even rarer in the wild due to trophy hunting or capture for the exotic pet trade, with there having been no recorded sightings of these elusive predators for the past 50 years. Today, the White Tiger is an animal that can still be found in a handful of zoos and animal sanctuaries around the world with these large and beautiful felines often being the star attraction. Along with the Bengal Tiger, the White Tiger is considered to be the second largest species of Tiger in the world after the Siberian Tiger.

The White Tiger is a large and powerful animal that can weigh up to 300kg and reaches more than 3 meters in length. Unlike the white variations found in other animal species, the White Tiger is not an albino as they still carry some form of pigment that creates their fur colour, as some individuals are known to retain an orange tinge to their white coloured fur. Like other Tiger species, the White Tiger has black or dark brown stripes that run vertically along its body, the pattern of which is unique to both the Tiger species and the individual. Along with the change in fur colour, the gene carried by the White Tiger’s parents also means that they have blue eyes rather than the green or yellow coloured eyes of normal Bengal Tigers. Despite the beauty of the White Tiger’s fur, it does in fact give these individuals a disadvantage as they are not so easily camouflaged into the surrounding jungle.

The White Tiger is an animal that would once have been found throughout much of India and the surrounding countries but their range has decreased dramatically, particularly over the past 100 years or so. Today the Bengal Tiger is found in small pockets of its natural habitat in India, Nepal, Bhutan and Bangladesh, and although populations are severely declining, they remain the most numerous Tiger species in the world. They are found in a variety of habitats including tropical forests, mangrove swamps and moist jungles that generally support dense vegetation and have a good source of fresh water. Although the White Tiger could once be found in the wild, it is very rare for the gene carrying parents to actually mate, and with the rapidly declining numbers of Bengal Tigers throughout their natural range, the chances of White Tigers being produced are becoming less every day.

Like other Tiger species, the White Tiger is a solitary animal as this allows this large predator to sneak up on prey more effectively in the dense jungle. Although the White Tiger is not nocturnal, they do the majority of their hunting at night as this also helps them to hunt more successfully. White Tigers have incredible hearing and sight which, along with their stealth, helps them when hunting in the jungle in the dark. Each Tiger occupies a large territory that is marked by urine and claw marks on trees, and can be up to 75 square miles in size. Despite the fact that they are solitary animals except for during the mating season, male White Tiger territories can overlap with those of a number of females’, particularly in areas which are high in prey. Male White Tigers will however, defend their patch fiercely from other males who may be trying to steal their spot.

In order for a White Tiger to be produced, both of its parents must carry the gene. Male and female White Tigers are attracted to one another by their roars and scent marks, and once mated, the male and female go their separate ways. After a gestation period that lasts for around 3 and a half months, the female White Tiger gives birth to up to 5 cubs, which are blind and weigh roughly 1kg each and can have either white or orange fur. The White Tiger cubs suckle on the milk from their mother and begin to eat meat that she has caught for them when they are around 2 months old, and are weaned four months later. The White Tiger cubs begin to accompany their mother hunting and eventually leave her and begin their solitary life in the jungle when they are about 18 months of age. White Tigers have an average lifespan of 12 years, which can be longer in captivity.

In the same way as other Tiger species, the White Tiger is a carnivorous animal meaning that it only hunts and eats other animals in order to gain the nutrition that it needs. The White Tiger is an apex predator in its environment, hunting its prey by stalking it stealthily in the darkness of night. The White Tiger primarily hunts large, herbivorous animals including Deer, Wild Boar, Cattle and Goats that feed both in the jungle and on its outskirts. The White Tiger has a number of adaptations to help it to both catch and kill its prey, including being strong and powerful, incredibly fast, and having long and sharp claws and teeth.With growing Human settlements pushing the White Bengal Tiger into smaller and smaller pockets of its historical range, they are also commonly known to hunt and kill livestock, with entrances into villages also becoming increasingly common.

In its natural environment, the White Tiger has no predators due to the fact that it is such a big and powerful animal itself. They are however severely affected by people and have been for hundreds of years, as they have been both captured and hunted for their beauty, and have lost a significant chunk of their historical range to deforestation for both growing Human settlements and agriculture. With the loss in forest, there is also a decline in the White Tiger’s prey so populations are becoming increasingly harder to sustain. The fact that the few Bengal Tigers that remain in the wild are becoming more and more isolated means that there is less of a chance that White Tigers will be produced, and this coupled with the severe declines in population numbers could mean that White Tigers have disappeared from the wild forever.

Oddly enough, the White Tiger is thought to have a slightly shorter life expectancy than the normal Bengal Tiger. Although there is no evidence of this in the wild, captive studies conclude that it is due to the White Tiger’s mutated genes and to the inbreeding that is required to continue breeding the White Tiger in captivity. One of the biggest reasons for White Tiger’s becoming rarer and rarer in the wild is the fact that they were often captured by the rich, who kept them as an incredibly exotic pet. The White Tiger is one of the most versatile and adaptable predators in the Asian jungle as they are not only incredibly quick and agile at running, but they are also very capable swimmers, allowing them to breech natural boundaries such as rivers and wetland.

Since they were first brought into captivity, White Tigers have been interbred by Humans in a business that is morally questionable and purely profit based. Since then, this already rare animal is thought to have disappeared completely as there have been no confirmed White Tiger reports since the mid 1900s. Although it is simply a question of two gene carrying individuals mating, the fact that people have hunted them and taken over much of their natural habitat, means that the chances of this happening are not very high. There is an issue however, with increasing instances of Bengal Tigers actually entering Human settlements which causes problems between the Tiger and the villagers. Due to the fact that Tigers are becoming increasingly more vulnerable animals, it is illegal to shoot them and so they often return to the same village night after night.

The White Tiger is a Bengal Tiger which is a species listed by the IUCN as Endangered and therefore severely threatened in its surrounding environment. Estimates of around 100,000 Tigers found in the jungles and mangrove swamps of Asia were made at the beginning of the 1900s, but today there are thought to be less than 8,000 Tigers in the wild, with around 2,000 of these being Bengal Tigers. There are no White Tiger individuals known to be found outside of captivity.

White Tigers are Carnivores, meaning they eat other animals.

What Kingdom do White Tigers belong to?

What class do White Tigers belong to?

What phylum to White Tigers belong to?

What family do White Tigers belong to?

What order do White Tigers belong to?

What type of covering do White Tigers have?

White Tigers are covered in Fur.

What genus do White Tigers belong to?

Where do White Tigers live?

In what type of habitat do White Tigers live?

What are some predators of White Tigers?

Predators of White Tigers include humans.

How many babies do White Tigers have?

The average number of babies a White Tiger has is 3.

What is an interesting fact about White Tigers?

No White Tigers have been seen in the wild for 50 years!

What is the scientific name for the White Tiger?

The scientific name for the White Tiger is Panthera tigris tigris.

What is the lifespan of a White Tiger?

What is a baby White Tiger called?

A baby White Tiger is called a cub.

How many species of White Tiger are there?

There is 1 species of White Tiger.

What is the biggest threat to the White Tiger?

The biggest threat to the White Tiger is habitat loss.

What is another name for the White Tiger?

The White Tiger is also called the white Bengal tiger.

How fast is a White Tiger?

A White Tiger can travel at speeds of up to 60 miles per hour.