The muskrat, or Ondatra zibethicus, is a member of the rodent family Cricetidae and the only surviving member of the genus Ondatra. Despite its name, it is not a rat and is actually closely related to voles and lemmings. Muskrats are covered in thick brown fur, typically weigh between 1.3 and 4.4 pounds, and measure 8 to 10 inches long. They serve an important role in wetland environments and have also been a crucial part of human cultures for thousands of years. Here is a list of 10 incredible muskrats facts that show what makes these aquatic rodents so amazing.

10. Muskrats Evolved Around 4 to 5 Million Years Ago

For our first entry on our list of muskrat facts, we’re going back in time to the dawn of muskrats. Researchers have found hundreds of muskrat fossils dating back at least 4 million years. This means that muskrats likely evolved sometime between 4 and 5 million years ago during the Lower Pliocene.

While some researchers believe that all extant muskrats belong to the same lineage, others disagree with that view. These contrarian researchers believe there used to be several different muskrat species that have mostly since gone extinct. Regardless of whether that’s true, it’s undeniable that modern muskrats measure noticeably larger and feature larger and more complex teeth than their ancestors.

9. Muskrats Are Native to North America

If you live in North America, there’s a good chance that you’ve seen a muskrat at some point. They range throughout Canada and the United States, along with some parts of northern Mexico. You can typically find them in freshwater and saltwater wetlands, including coastlines, rivers, or lakes.

Although you can find muskrats around the world, the truth is that they are only native to North America. All other muskrats are immigrants that have found their way to new habitats. Suffice to say, muskrats are truly North American animals and are synonymous with the continent.

8. Traders Used to Prize Muskrats for Their Fur

For thousands of years, humans have hunted animals not only for their meat but also for their fur. The fur trade spawned great enterprises that sent hunters and trappers traipsing through the wild to find the most beautiful and sought-after pelts. North America in particular became a hotspot for trappers during the 17th and 18th centuries as the fur trade boomed thanks to the demand in Europe for fur from North American animals.

Muskrats were just one of the animals that drew the attention of fur traders. Muskrat fur is quite warm, particularly in the winter, when the animals need to protect themselves from frigid water temperatures. In the United States during the early 20th century, muskrats were specially treated and sold as Hudson Seal Fur, and the fur also gained popularity throughout Europe and Asia.

For the next entry on our list of muskrat facts, we’ll cover one of the more impressionable muskrat facts – how you can identify muskrat tracks. Many animals leave distinctive tracks, which can help enterprising persons discern the identity of the maker. The shape, depth, and distribution of tracks all work together to create a story about the animal, their behavior, and actions.

If you ever want to spot muskrat tracks, you must look for certain tail-tell signs – in other words, look for the tail. Muskrats possess long tails covered in scales. The tail is flat and vertically oriented and tends to drag behind as they walk. As a result, muskrat tracks often feature tail tracks as well, which makes the tracks easy to identify.

6. Some Muskrats Build Lodges While Others Live in Burrows

Muskrats have evolved to live in cold climates thanks to their thick fur. That said, they live in marshes and swamps, so even with their fur muskrats require shelter to survive freezing winter temperatures. As a result, they typically build shelters to protect themselves from the cold and predators.

Some muskrats dig burrows into the sides of a riverbank, lake, or pond. These burrows typically have an underwater entrance measuring around 6 to 8 inches wide. Meanwhile, other muskrats chose to instead build standing lodges. A muskrat normally constructs its lodge from cattails and other vegetation, and the structure can reach nearly 3 feet high.

For our next entry on our list of muskrat facts, we turn to the muskrat’s dietary quirks. Many animals engage in unique and almost ritualistic feeding behaviors. Some animals are secretive eaters that like to hide their food, while others engage in garish displays of gluttony and choose to wolf down as many mouthfuls as quickly as they can.

Muskrats engage in their own strange and quirky habits when it comes to feeding. For example, muskrats normally construct feeding platforms next to their lodges where they take their meals. They are mostly active at dusk and dawn, which is when they often come out to feed. Muskrats are omnivores that primarily feed on cattail and other vegetation as well as some small animals such as frogs, crayfish, fish, and turtles.

Muskrats are aquatic rodents that spend the majority of their lives in and around water. Their long, hairless tails are designed to help them propel their bodies through the water. They are also aided by their webbed feet tipped with sharp claws that allow them to navigate water and dig through mud and vegetation. Moreover, they possess the ability to close their ears so that they can keep water out.

As semiaquatic rodents, it’s no surprise that muskrats are excellent swimmers. In fact, the average muskrat can remain underwater anywhere from 12 to 17 minutes at a time. Their bodies can stave off the buildup of carbon dioxide, which allows them to stay underwater for such a long time.

3. Muskrat Litter Sizes Vary According to the Season

Like some mammals, muskrats are monogamous and usually live in a family unit consisting of a female, male, and young. While family life might sound idyllic, competition over mates and territory can get quite fierce, and muskrats will often fight to the death for both. They construct a nest to protect themselves and their family from the cold and predators, which is also where they will give birth to their young.

Muskrats typically mate underwater, after which they prepare for the birth of their young. Female muskrats can often produce two or three different litters in a single year. The size of a litter varies according to the season and the temperature outside. During colder months, they generally give birth to between 4 and 8 pups. However, during warm months they can easily give birth to as many as 15 pups.

Human societies have looked to animals for inspiration and explanations for thousands of years. From creation myths to spiritual guides, animals have helped people to find order in chaos.

In addition to serving as an important animal in the fur trade, muskrats also feature prominently in a number of Native American cultures. Several tribes used muskrats to help them predict the weather by observing when muskrats would construct their shelters in preparation for winter. Meanwhile, some tribes have creation myths involving muskrats. For example, in one story, a muskrat swims to the bottom of a sea to pull mud up and create the land.

1. Some Countries Consider Muskrats to Be an Invasive Species

In Europe, muskrats are considered invasive alien species. Due to their habit of building lodges in waterways, they can often damage ecological habitats and can also compete with other native species. As a result, importing, breeding, or transporting muskrats for personal or commercial use is illegal. 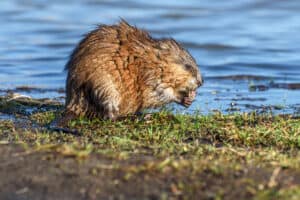 Muskrat Poop: Everything You’ve Ever Wanted to Know