Click through all of our Muskrat images in the gallery. 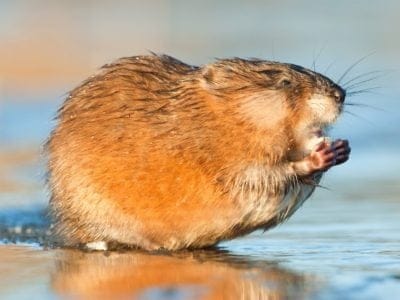 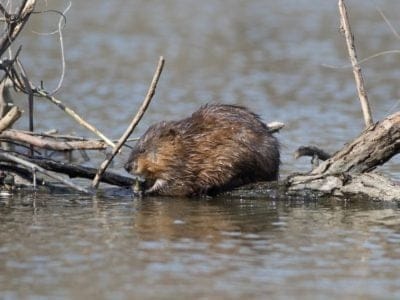 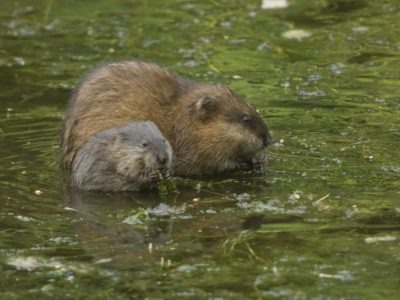 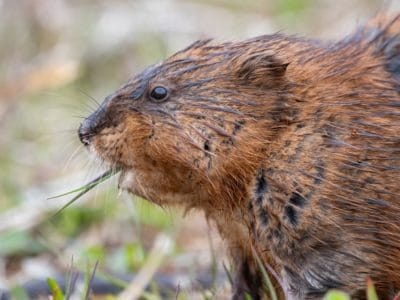 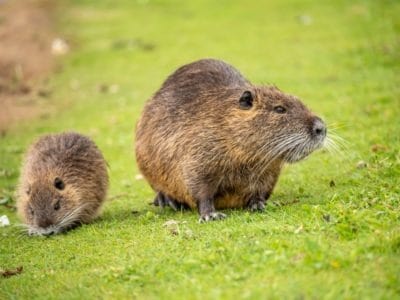 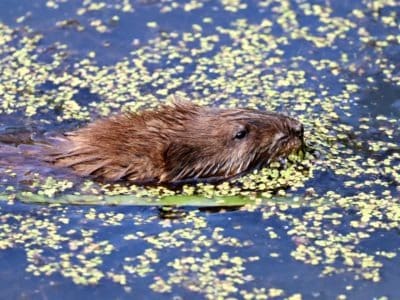 View all of the Muskrat images!

The muskrat is a feisty rodent that splits its time between water and land.

With its webbed feet and big rudder-like tail, the muskrat is a very well adapted and successful species that has a massive range across the freshwater wetlands and lakes of the Northern Hemisphere. Although it doesn’t engage in massive construction projects like the beaver, the muskrat does build sturdy homes around the water that can fit an entire family. These fast breeders sometimes come into conflict with each other over living space and resources.

The scientific name of the muskrat is Ondatra zibethicus. Ondatra is derived from the Huron and Wyandot word for the animal and came to us through the French, while zibethicus is a Latin word meaning musky-odored due to its strong scent. The muskrat is the only currently living member of the genus Ondatra. More broadly, it belongs to the family of Cricetidae in the larger order of Rodentia along with the voles, lemmings, hamsters, and New World rats and mice. In fact, some taxonomists believe that the muskrat is really just a type of vole. Most voles are land-based, but there are several species of water voles (one of which lives in North America) that are semi-aquatic in nature.

The animal’s body shape bears more than a passing resemblance to the beaver, but despite a shared habitat and lifestyle, the two animals are only distantly related within the order of Rodentia. The muskrat’s big body measures no more than 25 inches and around 1.5 to 4 pounds. The flat and scaly tail adds another 7 to 11 inches to the body size. Its body is complemented with long whiskers, big teeth emerging from the skull, short legs, and webbed hind feet. The dense waterproof fur, which is dark brown in color (though lighter in the summer), can trap air underneath, which provides the muskrat with plenty of warmth and buoyancy. The lips have the ability to close behind the front incisors so the muskrat can gnaw underwater without drowning. The small ears are barely visible through the fur.

For most of the year, the muskrat is a solitary animal that may only share a den with others to conserve body heat. But during the breeding season, the muskrat’s social life is oriented around large family groups consisting of a male and female pair and all of their offspring. These groups squabble with each other for limited territory, which frequently leads to injury and death. If the territory becomes too crowded, then the female might actually kick out some of the offspring from the nest. These animals communicate with each other or warn off intruders by secreting a strong-smelling musk. It also has a range of squeaks and squeals.

Although mostly nocturnal, muskrats are animals that are most active between the mid-afternoon and dusk periods. They are rather slow and cumbersome on land, but they are good swimmers that can stay underwater for 12 to 17 minutes at a time and even swim backward. These rodents paddle with their webbed hind feet and use their tail as a rudder.

The muskrat is also a good digger that can create tunnels from piles of vegetation and mud in or near shallow water. These homes, which are called push-ups, provide protection against predators and the harsh elements. They usually have an underwater entrance and at least one chamber. They do not usually store food for the winter, but if resources start to dwindle, then it can consume the inside of its own burrow. Sometimes the muskrat will resort to abandoned beaver dens as well. Some reports indicate that a muskrat may even shack up with a beaver and help it identify nearby predators.

The muskrat is endemic to the temperate and colder regions of the United States and Canada. The species was later introduced to Europe and Northern Asia (mostly Russia) in the early 20th century and spread quickly from there. The muskrat thrives in freshwater lakes, ponds, swamps, and marshes with 4 to 6 feet of water where it has plenty of room to build its nest.

Muskrats are actually omnivorous feeders that can opportunistically eat either vegetation or meat, but the vast bulk of their diet consists of plant matter, the most important of which is probably the cattail. The carnivorous part of the diet consists of small animals, including frogs, crayfish, turtles, mussels, and fish. The muskrat eats approximately one-third of its weight in food every single day.

The muskrat is an important source of food for a staggering number of predators such as coyotes, raccoons, barn owls, alligators, bobcats, cougars, foxes, bears, wolverines, eagles, cottonmouth water moccasins, minks, and river otters. In some areas, it is a critical intermediary in the ecosystem between the lowest parts of the food chain and the apex predators at the top.

Muskrat hunting was more common in the past. It still occurs today, but not necessarily for resources. In some parts of Europe, the muskrat is considered to be an invasive species and therefore hunted and poisoned because of the damage it causes to dikes and levees on which people rely to prevent flooding. The species can also cause damage to crops and gardens near its natural habitat.

Because of their prolific reproductive rate, populations tend to survive well in most areas even when the muskrat is hunted or infected by disease (though Pennsylvania populations appeared to be on a decades-long decline). And while large swaths of its native wetlands have been destroyed in the United States, the muskrat has adapted well to life near the newly created canals, irrigation channels, and small runoffs and streams. The decline of some natural predators has caused muskrat populations to swell beyond normal, sometimes even exceeding the ecosystem’s capacity to sustain them.

The muskrat has a breeding season that lasts in the spring and summer between March and August. As mentioned before, the muskrat is a monogamous species that form breeding pairs with a defined home range. However, if space is limited and populations overcrowded, then the muskrat may form dominance hierarchies and engage in polygamous behavior, meaning that a single adult will have multiple partners throughout the breeding season. Mating occurs while the muskrats are partially submerged in the water or straddling some debris on the surface of the water.

The female produces two or three litters per year each consisting of six to eight young on average. After a gestation period of some 28 days, each kit is born small, hairless, and entirely reliant on the group for protection and food. For the first month of their lives, the young kits are entirely dependent on the mother for protection and milk. The father plays almost no role in the process of raising the young. It takes anywhere between six months and a year for the kits to fully develop. The development time depends on the climate, as the more northern muskrats are the slowest to grow.

The muskrat usually lives no more than three or four years in the wild but up to 10 years in captivity. Many of them are expected to die from predators at some point in their lives, so they make up for this high rate of attrition with their high breeding rates. This can also lead to overpopulation and conflict in some areas.

Although exact population numbers are not known, the muskrat has survived and thrived almost everywhere throughout its native and introduced range. According to the IUCN Red List, which tracks species conservation status, the muskrat is a species of least concern, meaning no special efforts are needed to bolster their numbers. Some muskrat populations appear to undergo a boom/bust cycle based on the availability of food in the area. As more muskrats are born, the amount of available vegetation goes down, which limits how many muskrats can survive. As population numbers go down, vegetation levels return to normal. In this way, the numbers tend to even out over time.

What is the difference between a muskrat vs. a beaver?

Although both species are adapted for a semi-aquatic lifestyle, the beaver actually belongs to a separate family called Castoridae. This makes the muskrat more closely related to some voles, mice, and rats than beavers. The difference is reflected in some of the beaver’s physical and behavioral characteristics. The beaver has a much larger size (up to 60 pounds), a truly massive skull in relation to the body, and a wider, paddle-shaped tail. When swimming, the beaver’s body is usually submerged except for the head, while the muskrat’s entire body is visible in the water. Both beavers and muskrats are the only mammals to build aquatic homes, but only the beaver is able to build dams. Muskrats actually appear to help beavers by opening up a path through cattails and other vegetation with their voracious appetite.

The muskrat is a large rodent with a big body, a flat tail, and long whiskers. It should not be confused with the beaver, which belongs to an entirely separate family.

How big is a muskrat?

The muskrat’s body measures as much as 25 inches, plus another 7 to 11 inches with the tail. For a rodent, it weighs a rather hefty 4 pounds.

Muskrats can be quite aggressive about defending territory and resources against each other. Usually, this aggression is directed against outside groups, but if resources become tight, it can even be directed inward against other members of the family. When a muskrat encounters a larger or more dangerous animal, then it mostly prefers to run away.

The muskrat was sometimes consumed in certain parts of the United States (both by Native Americans and settlers) when other ready food was absent, but it has never been hunted for food on a large scale.

Are Muskrats herbivores, carnivores, or omnivores?

Muskrats are Omnivores, meaning they eat both plants and other animals.

What Kingdom do Muskrats belong to?

Muskrats belong to the Kingdom Animalia.

How fast is a Muskrat?

A Muskrat can travel at speeds of up to 3 miles per hour.