Nicholas Zimmer/Shutterstock.com
Share this post on:
More Great Content:
Discover the Unique Animal that Can Survive…
Why Do Opossums Play Dead?
Opossum Lifespan: How Long Do Opossums Live?
Opossum Teeth: Everything You Need to Know
What’s a Baby Opossum is Called &…
Are Opossums Dangerous?

Opossums and possums often cause some confusion due to their very similar names. But although they are both marsupials, they are actually different from one another. For example, opossums are marsupials native to North America. Possums are marsupials native to Australia. In the United States, opossums are often referred to as ‘possums,’ confusing matters. In this article, we are going to explore 10 incredible facts about the Opossum, native to the Americas. Let’s go!

Opossums may look like a rodent, with their long noses and rat-like tails, yet they are mammals. Like kangaroos and koalas, opossums are marsupials, meaning that they are carried and nursed by their mothers in a pouch on their bellies.

Virginia opossums are the only North American mammals that are most closely related to kangaroos. They are the last living descendants of a group of animals native to the Americas known as marsupials, or pouch-bearing animals.

2. Opossums Spread to the US West Coast Because of The Great Depression

After the Isthmus of Panama joined North and South America 3 million years ago, two marsupials returned to North America: the Virginia opossum and the southern opossum. Virginia opossums aren’t native to the US west coast, yet they live near the Pacific coast. During the Great Depression, people introduced opossums to the area as food.

3. They Have a Great Resistance to Snake Venom

Opossums can tolerate snake venom, which is an extraordinary adaptation. This trait, mostly seen in gigantic opossums, allows them enough resistance to venom that they routinely consume snakes as food.

Opossums’ immunity to snake venom may have developed as a defensive mechanism that allows them to ingest these snakes despite their dangerous reputation as predators. Other researchers, however, think that they can eat different types of food because of a predatory adaptation.

4. Opossums Have a Resistance to Rabies

Although any mammal can contract rabies, it is extremely improbable that you will ever encounter an infected opossum. The rabies virus has a more difficult time surviving and multiplying inside an opossum’s body than it does inside most placental animals due to the animal’s lower body temperature. Still, use extreme caution if you must handle a wild opossum.

5. A Newborn Opossum is Only the Size of a Honeybee

Due to their short gestation, opossums have underdeveloped babies smaller than honeybees! Just like baby kangaroos, they’re called joeys. Opossums can have up to 20 young, with 8 to 9 on average. However, opossums aren’t technically maternal. While their young are in the pouch, mothers defend them passionately. However, once they’re out, they’re abandoned to survive on their own. Therefore, only one in ten joeys survives to adulthood.

Another incredible fact about opossums is the number and arrangement of their nipples! Commonly found on the bellies of opossums are 13 nipples, 12 of which are arranged in a circle around a single nipple in the middle. Like most marsupials, the newborn joeys are completely helpless outside of their mother’s pouch, where they can find nourishment, warmth, and refuge. Babies may be able to find the pouch with the help of small glands in the area. Until they are old enough to wean, the young will nurse from one of their mother’s 13 teats.

7. Playing Dead is Not Voluntarily

Despite its effectiveness, opossums don’t play dead voluntarily. Like fainting, it’s a natural reaction to intense stress. This is where the term “Playing possum” became a euphemism. This is a unique and effective defense system for possums. Many predators prefer living prey; thus, this strategy confuses or repels them. To repel foxes and owls, opossums also emit a powerful mucus from their anuses.

8. They Have “Prehensile” Tails

A prehensile tail can grasp and coil around branches of trees. The opossum may suspend itself briefly by its tail and use it as an aid when climbing or relaxing in a tree. The strong, prehensile tails of opossums are just one way in which they have adapted to their semi-arboreal environments. Sometimes, possums will use their tails to carry nesting materials, such as twigs and leaves, back to their den.

9. Opossums Have a Complex Reproductive System

Like other marsupials, opossums have complex genitalia. For instance, male opossums have two-headed, forked penises. Females, on the other hand, benefit from two wombs and three genital canals. The opossum’s medial vagina is where the joeys exit after birth, while the lateral vaginas on either side of the body serve as sperm passages.

10. There are Semi-Aquatic Opossums

Opossums may survive in a wide variety of climates and settings. The water opossum or lapok is a marsupial that spends some of its time in the water. Even while lutrine opossums also have a semi-aquatic lifestyle, water opossums are by far the most aquatic marsupials on Earth.

The water opossum is unique among marsupials for another reason.  Unlike most marsupials, water opossum males have pouches as well, which they use to transport food rather than their young. These pouches also help the opossums prevent their genitalia from becoming entangled in underwater vegetation. 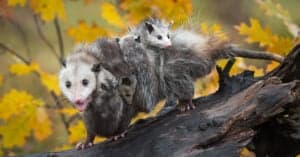